Actress, author and spokesmodel Suzanne Somers gently confronted a naked home intruder who appeared while she was streaming a makeup tutorial from her Palm Springs, Calif. home.

The 74-year-old Somers was on Facebook Live Friday evening when the incident occurred. She paused during the recording and told nearby husband, Alan Hamel, that she heard strange noises off-camera.

While Hamel assured, “It’s just a frog,” Somers turned to her left after hearing more noise and viewed the intruder, who remained off-camera during their conversation. The intruder was described as “near-naked” in reports.

Somers was calm and spoke gently to the intruder, who said that he was “terrified’ of something. I’m not even sure…there were ghosts following me.”

This is probably the point where I'd be picking up the nearest weapon of opportunity (most likely a large ice cream spoon) and would start waving it violently in his direction while shrieking like a mad-woman... But nope, not Suzanne. She stays cool & calm AF as if this were the most normal interruption in the world.

With almost zero emotion she says, "You shouldn't be here, but yeah, you don't scare me."

:: cue perfect comedic timing by taking her eyes off the guy to give her FB live fans a 'what a weirdo!' chuckle glance :: 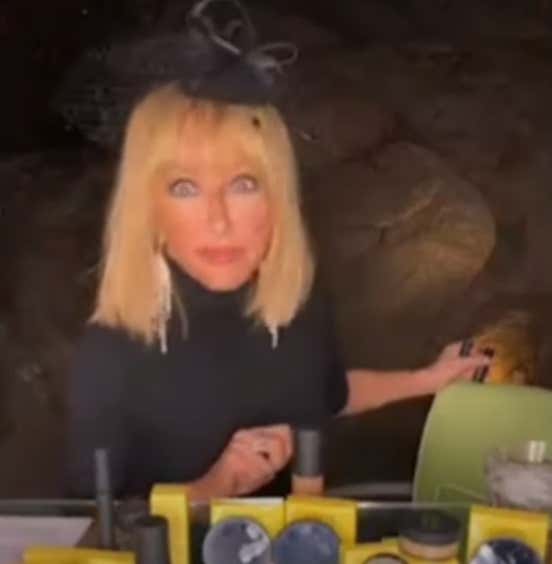 "Can you go home? Do you know what to do?," Suzanne asks with the same casual vibe she'd use chatting up a barista. She then uses hand motions to direct him towards the driveway. He can see himself out, she's not concerned.

He then tells her he's stumbled down from the mountain with a gift for her and after a quick, "I don't want anything, you seem like a very nice person," she's right back to cooly directing him out. "Alrighty, thank you," she says, getting back to her makeup and FB live as though nothing happened… She ends the show noting she'll be calling the police, but not before saying goodbye to her fans & ending the stream properly. What a legend…

As for the stalker fella's big plan, I'm left with one main question: