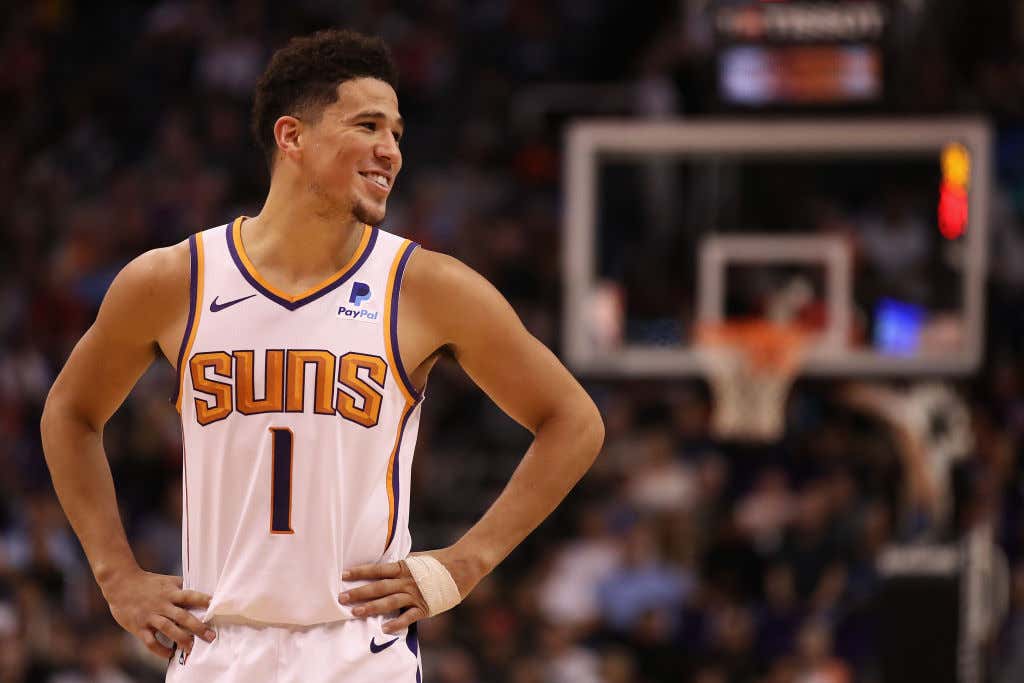 There are very few young players in the NBA as exciting as Devin Booker. He was incredible in the bubble and showed how dynamic and exciting he is. When the Suns went undefeated in Orlando and Book went OFF? It was kind of an announcement to the world that big NBA fans already knew: that Devin Booker had arrived. Along with Dame and Jamal Murray, no one played better.

The only problem is that he plays on the West Coast, which means the majority of games start LATE on the east coast, and that he plays in Phoenix, which hasn’t been a sexy franchise since the days of D’Antoni’s Run and Gun Suns.

Here’s the thing. He’s starting his sixth NBA season and he’s only 24 years old. His career has generally been a progression of steady improvement. And this year, with the addition of Chris Paul and the emergence of Deandre Ayton, there are significant expectations on the Suns for the first time in a long ass time. And they are surging.

And as a Blazers fan who regularly loses sleep watching late-night games, I’ve loved pretty boy Booker for a long ass time. So many things about his game to like. I mean, did you see his run down block a couple of weeks back?

This wasn’t Doug McDermott we’re talking about. It was freaking Jayson Tatum, and Booker just chased him down and pinned his shot. In-Sane.

And of course, when he’s cooking, not even a lock down defender can stop him.

But on the latest episode of This League, I got into it a bit with my partner in crime, Playboy Marti -- who just so happens to be the biggest Suns fan you’ll ever hear of (his brother even works for the team).

Is Devin Booker underrated or overrated. And let me tell you, I didn’t think this was a serious question either, until I began to look at the numbers.

And let me tell you, they scared me.

Before we get to numbers, let’s ask a fundamental question: what’s the purpose of a two-guard? Shooting. In this era, deep shooting. The three-ball. It’s so critical that Nick Nurse designed (and won) a chip-based in large part on getting as many productive 3 point shots as possible, and minimizing mid-range jumpers.

The truth is staggering and this is coming from someone who isn’t a stat monger. Devin Booker is a 35% lifetime shooter from three, and is below his career average in 2021… with the addition of Chris Paul.

You’re thinking, wait a minute. Booker just BARELY got beat out in 2020 at the All Star 3 point contest by Buddy Hield? Isn’t he a monster from range? No, actually, he’s not.

So that got me thinking. Is Booker as good as, say, C.J. McCollum? C.J. is a MONSTER from three, shooting 44.1% this year before getting hurt and 40% for his career. Plus, other than the recent injury, he’s been an iron man. Booker misses on average 12 games a year (C.J. misses on average just 4).

So given that Book has troubles from three, and misses his share of games, where would you put him on the list of NBA Shooting Guards?

Tune into the latest episode of This League to hear me and Playboy Marty break down where Book fits.