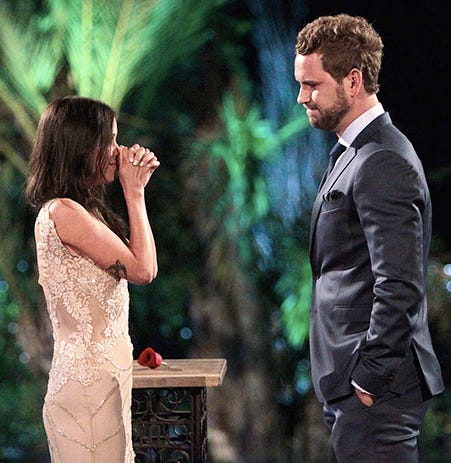 Everyone agrees that Nick from The Bachelorette has to kill himself right? Kaitlyn let him go through his entire proposal, the whole fucking speech and waited until he was in the middle of getting down on his knee to tell him he didn’t win. That is just absolutely brutal. She knew from the second that he walked in that he wasn’t the one and just let him say how much he loves her. I would say that it doesn’t get worse than that but this is the SECOND time this has happened to him. He was on the last season of the bachelorette, made it to the final two, and didn’t get picked. Twice on national television he was dumped while proposing, so he basically has to go into hiding for the rest of his life. And because ABC just likes to watch people suffer, his whole family was there watching it happen in the live studio and he had to go on the after show to talk about how much his life sucks. Just a Nick massacre.

Don’t get me wrong; I hate him and he’s the biggest cockbag alive who never deserved to be able to come on the show half way through but still what happened to him sucks. I was very happy that Shawn and his hair won. Even though everyone knew for months that he was going to win because Kaitlyn is such a little minx who can’t hide her sex life, so she posted a snapchat of her and Shawn in bed together.

P.S When Nick got in the limo after getting dumped he said ” I am the worlds biggest joke” and I think that sums it up quite nicely.