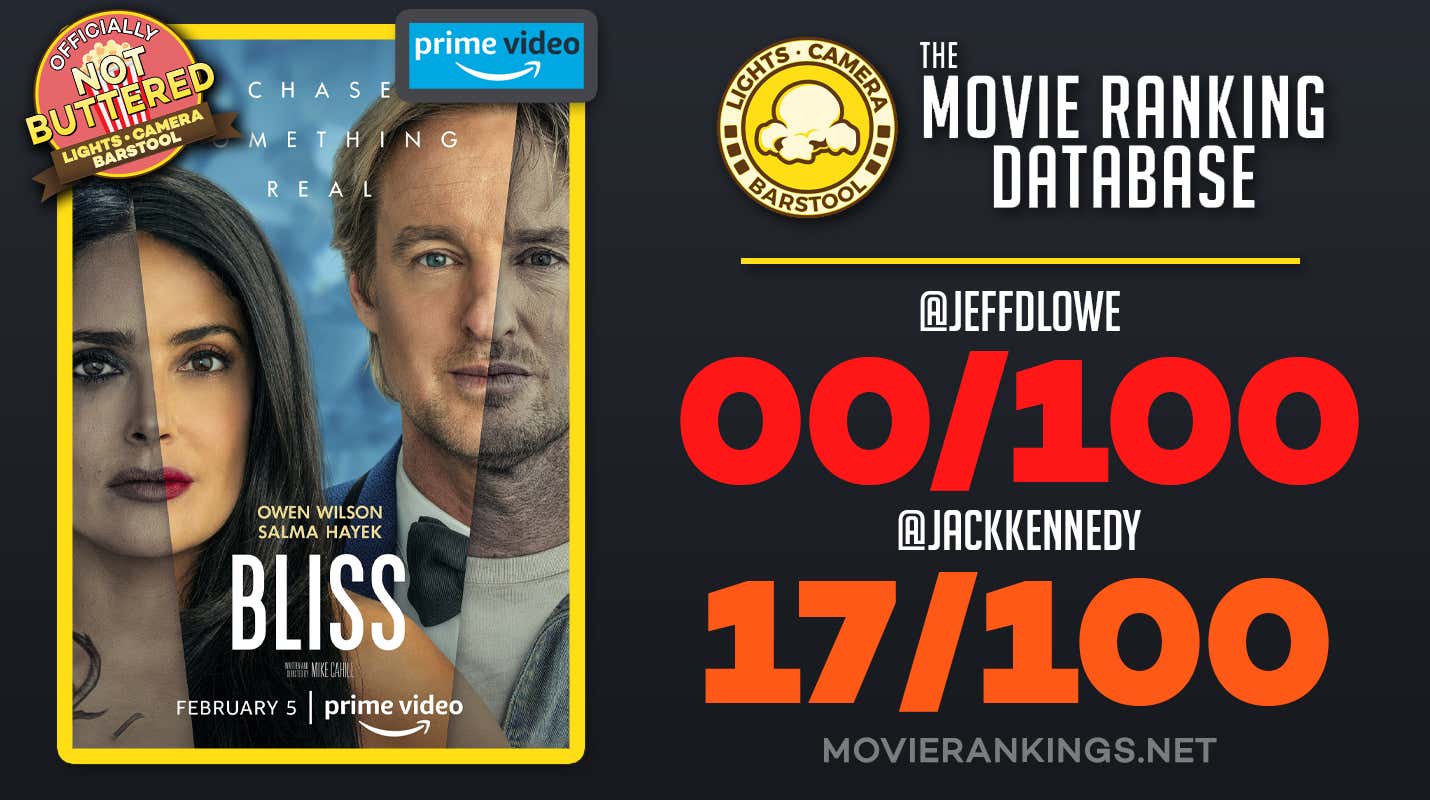 We reviewed this movie on our most recent episode...

...and it fucking sucks.

An unfulfilled man and a mysterious woman believe they are living in a simulated reality, but when their newfound "Bliss" world begins to bleed into the "ugly" world, they must decide what's real and where they truly belong. (via Google)

JeffDLowe (00/100): Boasting a story that is not nearly as smart as it wants to be, 'Bliss' is a gassy fart of a movie that finishes with a "fuck you" to the audience as it delivers an unearned, nonsensical ambiguous ending. Being ambiguous and open-ended just for the sake of doing it doesn't automatically make a movie intelligent, it makes it incredibly fucking annoying and, in this case, bad.

Without spoiling exactly how the movie plays out, the ideas of multiple "realities" and what world is "real" are the backbone of 'Bliss' and how the movie plays out. You can jump to a conclusion by the end of the movie, but nothing is all that clear. No matter how many times you re-watch the movie, or read the synopsis, or watch theories, there is for sure no way to truly decipher the meaning or end results of the movie. On each side of the coin of the "what reality is real" argument, there are counter-points that are impossible to explain away!

I love ambiguous endings. Open-ended movies are my favorite. But this is a problem! You can't just throw a bunch of nonsense moments or pieces of misdirection in a movie, end without explaining anything, and then scream "ambiguous!" There has to be some sort of logic to explain one side or the other. But in 'Bliss', if you piece together all of the hints and clues, there is no logical way to arrive at an answer. It just amounts to a jumbled mess.

These problems also shouldn't distract from the fact that the acting was terrible, the script was weird, and there were some moments where I even questioned the seriousness of the movie. It was just weird and in a very off-putting way.

On paper, 'Bliss' actually has all of the elements of a movie I'd probably like, but the execution was about as poor as humanly possible. And, in the end, it felt like a big "fuck you" and a waste of time for audiences. I hate watching this movie, it was a miserable experience.

KenJac (17/100): I really didn’t know what to expect going into this movie, mostly because the trailer I had seen was a little vague and I haven’t seen Owen Wilson in much over the last few years. That's just to say I went into it open-minded. But  I think what you get with this is a hamfisted attempt at social commentary that punches way too far above its weight.

From an acting perspective, I think Wilson was fine. Hayek’s performance was just odd, though. And not in a way that complemented the character. It almost felt like they used the first take from every one of her scenes and rolled with it. Honestly, the best performance was from Nesta Cooper who played his daughter, Emily.

I think the movie looked nice and was shot decently, but basically, every other technical element was a fail. The script is so convoluted and confusing that it took an already boring and hamfisted idea and made it so much worse. The movie is basically ‘Project Power’ without so much as a fraction of the same entertainment value which is really saying something. It’s like an amalgam of that, ‘Fight Club’, ‘The Matrix’, and ‘Elysium’. It tries to do so many things and cover so many bases but really hits none. I think one moment that stands out to me as far as how hard they were trying to make this movie deeper than it was is the holo-zizec which was hilarious.

The only thing I can say positive about my experience watching this is that it gives me the opportunity to tell anybody listening to this right now to avoid watching it.

--
The movie is Officially Not Buttered, which should surprise nobody. You can head to Lights Camera Barstool right here to listen to our latest episode where we interview 'Avengers: Infinity War' and 'Avengers: Endgame' directors the Russo Brothers.