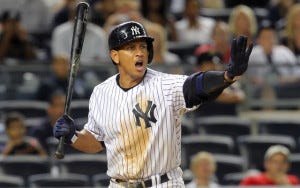 I want to start off by saying that if he is on steroids, I don’t care at all. I think these players should be able to put whatever they want in their body, to play at the best of their ability. That being said, I think today’s game is mostly clean thanks to increased testing and drugs dealers being rats, but if Alex was on steroids, everyone should just look the other way. Every home run Alex hits, is like a racist comment a grandparent makes at Thanksgiving. Yeah, it might be wrong, buts it’s exciting and that’s just how they did it in his time.

However, I refuse to believe that Alex Rodriguez is dumb enough to take steroids again. Not because he has learned about playing the right way, but because after getting caught twice without failing a test attached to his name, who could he trust? Getting any kind of a drug as a celebrity is tough because you normally need a go between so you have at least some plausible deniability. The last guy who had that job was Cousin Yuri. He got sentenced to jail time and his floor pissed on. So I bet that’s a “hard to fill” position. If Alex is making his own steroids at home in a bathtub like prison wine, then MAYBE he is on something, but he doesn’t strike me as a guy who could make a decent rum and coke so forget making drugs.

The biggest argument that he has to be on the juice is that his numbers are the best they’ve been in years all while turning 40 and missing basically 2 years. Yeah that seems a little weird, but I think those are the exact reasons hes been able to play like this. For years, Alex battled injuries and has had surgeries on his hips, all while rushing back to play because we the fans complained about how much he was making. He never took the time to fully heal. Now he’s taken 2 years to get healthy and he isn’t being asked to play the field. At 40 years old, there is no way Rodriguez would be able to play like this if he was asked to play the field everyday. Between the quick movements diving after balls and just standing in the sun for hours, his body would have broken down. Instead he is sitting in a shady dugout, staying hydrated and off his feet, saving all his energy for his time at the plate. Look at any ground ball he hits, and doesn’t even think about running out because he is saving energy for the times when he can make a difference.

That’s where being 40 years old comes into play. It may have taken 40 years but Alex finally has realized who he is and how to use that to his advantage. Instead of trying to be Derek Jeter and force people to praise him as such, we are seeing a humble ARod and in turn are praising him. What should be a negative, in his age, has turned into a positive because he is more mature and has learned his limitations. That and a solid PR team that probably told him getting back on the juice was a bad idea.
Follow @BarstoolJJ
//