I’ll admit that was a little bit of an exaggeration but what a game last night. First of all, the atmosphere. 38,000 people rocking on a Monday night in July, last year this game would have been half empty, this year the buzz is back. There is nothing like Chicago in the summer when the Cubs are playing well, everything feels right in the world. Second, the bats, obviously one night doesn’t break a team out of a slump but like I said yesterday, young teams will go through bumps in the road, last night we saw Kris Bryant get some confidence back, Fowler reach base 3 times, Starling get 2 hits, yes TWO HITS and the team put up a 9 spot. After the weekend we watched that felt real good. Now for the bad part. Carl will break it down further in his weekly post as he has forgotten more baseball than I know, but this bullpen is in trouble. I know it hasn’t been that bad all year but the Motte -> Soriano thing Joe Maddon is doing right now makes zero sense. Jason Motte has been great but Jason Motte is not a closer. He has one straight pitch and pitches to contact, basically the exact opposite of what you want in your 9th inning guy. As for Soriano I understand the move, it was low risk high reward, but I just don’t see it. He doesn’t have it, you can’t be using him in high leverage situations anymore, it just won’t work. If anything the goal before the trade deadline should be to get a bullpen arm for cheap and a 4th or 5th starter. The Cubs may not be back and they’re still going to have struggles to close out the year but last night reminded us of things to come. I’ll be patient knowing guys like Kris Bryant are just starting their career. Serenity Now.

Also big part of this year was learning how to win. Leading the league in walk off wins is a good start. 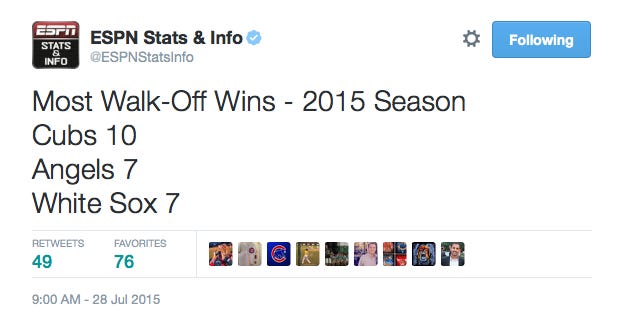