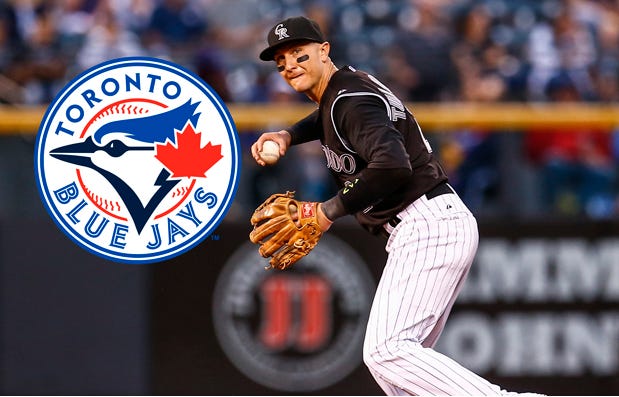 Big move that makes almost no sense for anyone involved, affects both New York franchises, and includes Ghost of Christmas Past Jose Reyes so lets get right into it:

As for the young pieces, the 22-year-old Hoffman fell to the Jays in last year’s draft after undergoing Tommy John surgery. That he was still taken ninth overall speaks to his talent, of course, and he’s already moved to the Double-A level with Toronto. Having cracked many top-100 leaguewide prospect rankings before the season, the high-upside right-hander shot up to 33rd on Baseball America’s mid-season list after showing his old stuff with a new UCL. He’s said to have a big fastball, excellent curve, and promising change. Over 67 2/3 innings, mostly at High-A, Hoffman has worked to a 2.93 ERA with 6.1 K/9 against 2.3 BB/9.

Castro, 20, has a more projection-dependent future outlook. He opened the year in the big league pen after finishing off 2014 at High-A. The righty struggled somewhat in that cameo, but still pitched beyond his years and has shown a live arm. He entered the year rated the #9 prospect in the Jays organization by Baseball America, which noted his lofty upside and need to develop reliable secondary offerings to factor as a long-term MLB starter. Kiley McDaniel of Fangraphs had him in the sixth slot this spring. With his quick ascent, Castro has moved to thefourth position on BA’s list and number five on MLB.com’s latest ranking.

So, if you ask me, this trade sucks for Colorado. Two good pitching prospects and the Rockies take on a 56 million dollar retread in Jose Reyes who’s on like his 12th team in the past 5 years. Thought the whole point was to get out from under the burdensome contract and they just took back another. As a Mets fan starving for a shortstop bat, you look at that weird ass trade and you scratch your head thinking “What the fuck is this?” Now, rumor has it this was the asking price from the Mets: 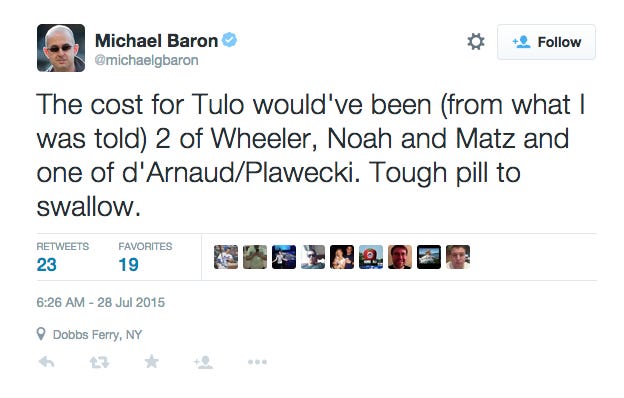 Which is utterly ridiculous. I would have gladly done one of those pitchers and one of those catchers for Tulo. But for them to ask for two of the big three, AND more, with no player including a price tag as high as Reyes’ in exchange, thats just nuts. Like they really wanted 2 pitchers out of 3 who already proved they are capable of being Major League Studs, plus an MLB ready catcher, and the Mets would be taking on Tulo’s money? I mean it just does not match up. The Mets get held over a fucking barrel with the talent they have. They have an embarrassment of riches when it comes to young arms and teams just blindly ask for like, all of them, whenever discussing trades. Which I get. But when push comes to shove and you decide to pull the trigger on a move and you elect to go with with 2 good prospects and a 56 million dollar declining now-journeyman over what the Mets have to offer, even if its a little less than your dream haul of arms, well thats just a head scratcher. I woke up this morning berating the Mets for not showing the stones to go after it, but if the Rockies truly wouldn’t budge on that price, I cant fault them. I dont care about taking on Tulo’s money, I dont care about give up 1 of those pitchers, this team needs a bat at shortstop and Tulo fits the bill exactly. Is he perfect – no, hes injury prune – but beggars cant be choosers. But at the price of basically 2 #1 type pitchers and a young MLB catcher thats just crazy. Also I guess rumor has it Tulo didn’t want to be a Met: 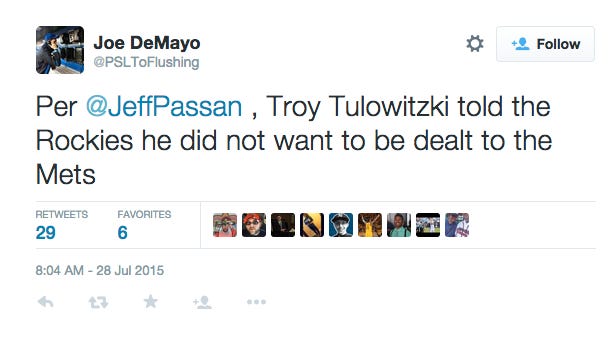 Don’t know why wouldnt want to play behind this pitching staff right now, but good luck in Canada, motherfucker! Baseball in Toronto is much better!

As far as the AL East – the Blue Jays lineup is now simply preposterous. Their offense is straight up fantasy baseball stuff. Again curious move considering the last thing you’d think Toronto would want would be more pitching but here we are. The thought is they will flip Reyes, as they have a AAA shortstop prospect ready to go. Good luck to whoever takes on the Reyes Project. Of course Mets fans are clamoring for him but it ain’t happening. Let me rephrase, it better not happen, unless its for a bag of balls and none of his money. I’m sure they’ll find some taker though, because there is always one for Jose, and end up with a couple more pieces. I guess this is the Blue Jays way of “going for it.” But here’s the thing – the Blue Jays have a 0% chance of winning the AL East. Not now. Not ever. Its just like never ever going to happen. They always hover around and watch as the Yankees/Sox/O’s and even Rays take the crown. Its just how it goes. Some things are written in stone. Thats one of em. It makes things a little harder for the Yankees, its a bat you dont wanna see in your division, but its on the Blue Jays and so therefore it doesnt matter. The Yankees are taking the AL East, Tulo goes from obscurity in Colorado to Toronto, and the Mets are still left batless and shortstopless. Time is a flat circle.

PS – For real, Latroy Hawkins STILL out there???? Would have bet the rent he retired about 3 seasons after the last time I made the “I thought Latroy Hawkins was dead” joke.