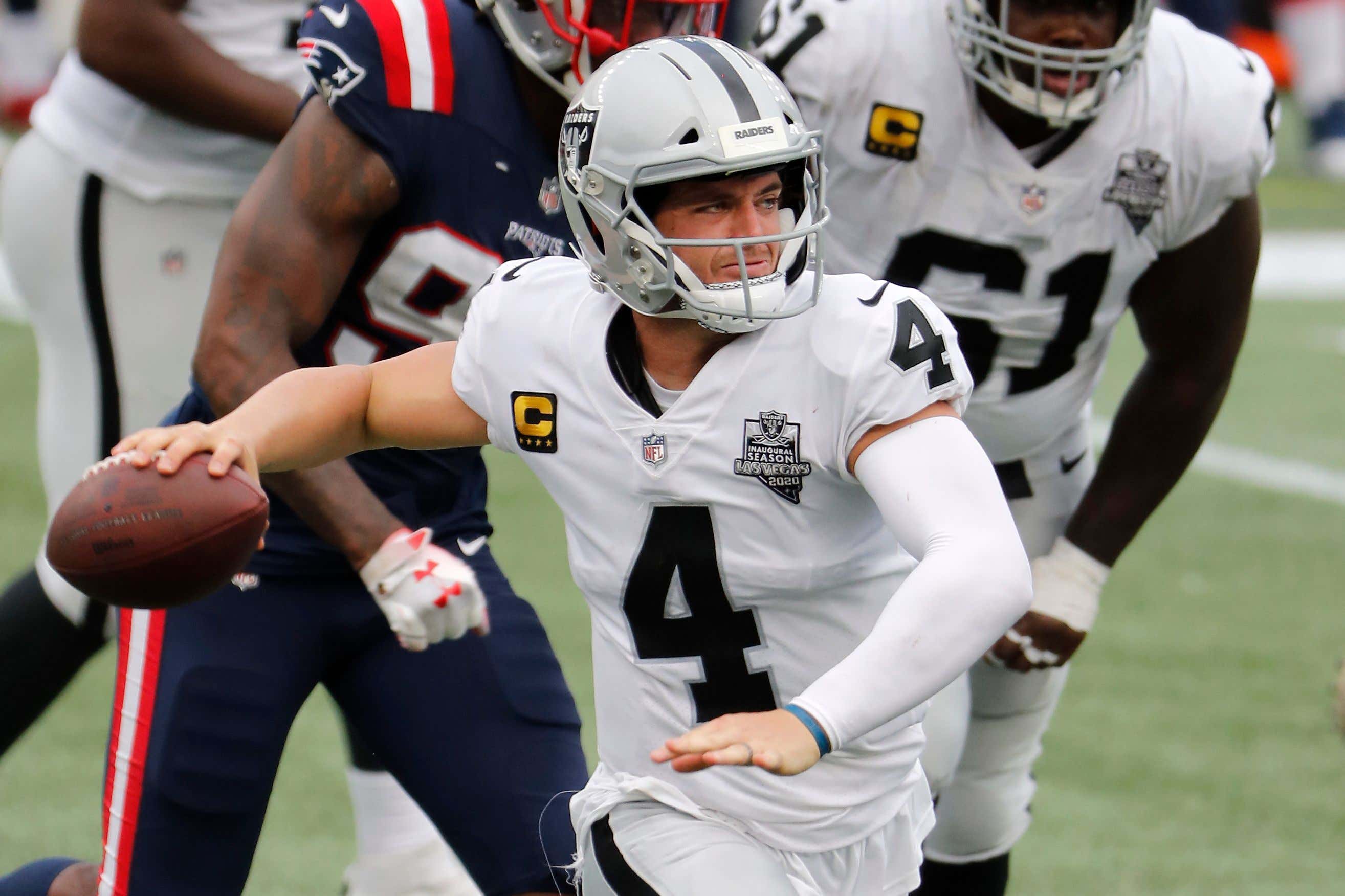 This is the fourth in a series. Volume I: Aaron Rodgers is here. This is Volume II, me being right about Matthew Stafford not coming to New England. And here's Volume III on Jimmy Garoppolo.

When you've made the career decision to climb into the Quarterback Rumormongering Octagon, you have to do so with caution. It can get dangerous inside that cage. And you can't be wasting your time or that of your devoted readers on wild speculation with no foundation. So in order to keep your trust, let me begin by pointing out this Derek Carr rumor isn't coming from me. It's coming from the Las Vegas Review-Journal:

Derek Carr’s outstanding season has made him a sought-after commodity for teams in need of a quarterback and could open the door for the Raiders to pursue Houston Texans quarterback Deshaun Watson.

The Raiders obviously are not tipping their hand about any offseason moves. But several NFL insiders expect the Raiders to field calls from teams inquiring about Carr’s availability. …

But there is a flip side to the season Carr just produced. Increased demand for his services, insiders say, could create a scenario in which a three-team trade allows the Raiders to acquire Watson.

Among the clubs that could get involved are the Colts, Bears, Patriots and the Washington Football Team. Depending on what happens in New Orleans, the Saints could be potential suitors as well.

“Carr would certainly be a great fit for a number of different teams,” an NFL executive said.

It makes sense on a few levels. The article isn't lying about Carr's season. I mean, it's exaggerating a bit. In a year where Aaron Rodgers had 48 touchdowns to just five interceptions and Deshaun Watson topped 4,800 passing yards and Patrick Mahomes went 14-1, I think you have to use the word "outstanding" sparingly.

But Carr was good. With career highs in yards, passer rating and QBR, if that's your thing. Here are his numbers and where he ranked:

In fact, statistically speaking, Carr's 2020 was practically identical to his 2019. So it's fair to say that as he's about to turn 30, this is who he is. A top third quarterback. Consistent, capable and durable (he's started 110 of a possible 112 career games), if unspectacular. Occasionally able to put together a game like the 513 yard, four TD, no INTs game like the one he threw at Tampa Bay in 2016. But a guy who's gone 19-29 in three seasons under Jon Gruden (8-8) this year) nevertheless. Which would explain the interest in upgrading to Watson.

In Ian O'Connor's book, "Belichick," he claims that Belichick has said he could take any Top 15 quarterback in the league and coach him up to win Super Bowls. True or not, Carr fits the description. You could do better than him. But you could do one hell of a lot worse. As we have just witnessed.

And because this matters, Carr comes with a fairly team-friendly contract. He's got two years left, all his guaranteed money has been paid, and he comes with cap hits of just under $20 million and just over $22 million. So that ups his value somewhat.

But here's the kicker. From that same LVRJ piece:

The fuck you say?

So let me figure out the thinking here. The Raiders feel they'll need four 1st rounders to land Watson, and they don't want to spend more than two of they're own, so they'll simply need two of somebody else's. That makes sense for them. And for Houston. So it works out perfectly for everybody, right? Why didn't I think of this when I sold the 2003 Ford Explorer No. 2 son drove to school. I should've simply explained to the buyer that his $2,500 weren't going to cover our tuition bill so he's going to have to give me about 30 grand. Then everyone would go away happy.

And before anyone looks at the two 1sts and a quarterback the Lions got for Matthew Stafford as some sort of gold standard for starting quarterbacks in the current market, let's all remind ourselves that the Rams had to throw in that second No. 1 as a make-good for Jared Goff's horrendous contract. In the way at a yard sale you'll meet someone's price on the parson's bench provided they throw in the vanity mirror and the antique folding table. The Rams were the seller who gave in because they needed the space in the quarterback's room. And the salary cap.

But there's not a chance in God's vast creation that the Patriots send two 1st rounders for Derek Carr. Let me repeat. No, forget that. Just go back and read the sentence again. Carr is a goodish, OKesque, decently quarterback with an established record of above averageness. But to use the old metaphor, he's a trailer, not a tractor. You can't rely on him to carry your freight on a long haul shipment over the course of a season and the playoffs. He'd be a nice part of a well established team. Not the guy to carry you in the middle of a rebuild. The Pats need an influx of young, reliable talent on offense. Also affordable, which they can only get through the draft. Burn the 15th pick this year plus the No. 1 next year on Derek Carr, and they'll have no way to build around him.

The bottom line is the player is good. The sticker price being quoted is ridiculous. You'd have to be a sucker to stay on the lot after reading that in the window. Belichick and Mike Mayock are boys from way back. If there's some interest in dealing Carr, I can easily imagine him being offered to New England. And can see it happening for maybe this year's 2nd rounder and possible some deal sweetners on Days 2 and 3 of the 2022 draft. But that's not going to help Mayock get the guy he really wants, Deshaun Watson. So it's a non-starter.