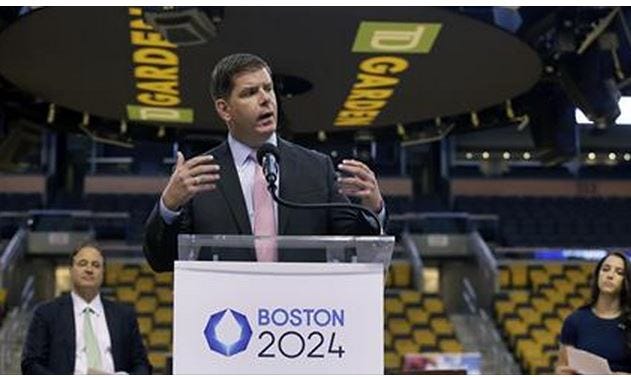 ESPN – Boston Mayor Marty Walsh says he won’t sign a host-city contract that is key to the city’s bid for the 2024 Olympics without more assurances that taxpayers won’t foot the bill. Walsh made that announcement at a hastily called news conference Monday that coincided with Gov. Charlie Baker’s meeting with the U.S. Olympic Committee. The USOC has made it clear that it needs full support of city and state leaders, and the Walsh announcement looks like a major blow to the bid. Walsh said he was prepared to let the bid drop if he was forced to sign the contract before he received more assurances.”I’m not signing an agreement that’s going to cost the taxpayers if there are overruns,” he said.

Listen I’m on the record as wanting the Olympics here. I think it would be a once in a lifetime type opportunity. But anybody who doesn’t think it would be one of the great clusterfucks of our generation is brain dead. Nothing in this city is easy. Things that are supposed to be built in a month take years. (See the Big Dig) Nobody gets along. That’s why the Patriots almost left New England. That’s why we can’t figure out where to put a casino. There is zero change this wouldn’t be a fiasco. I mean our fucking Mayor won’t even sign off on it and the thing hasn’t even started yet. This has disaster written all over it.

But despite all that if you don’t want the Olympics you have quit on life. It would be one giant party for 2 weeks. Work would essentially grind to a halt. The city would grind to a halt. Boston is too small. It’s not like LA. If something major is happening here it takes over everything. For better or worse you wouldn’t be able to avoid it. It would be like a black hole. There is just no way anybody would get anything done. It’s a once in a lifetime experience. You just got to know it’s going to be a giant clusterfuck and accept it. Legalize drinking in the streets and let the mayhem begin. And yes I’m serious about legalizing drinking everywhere. That’s the only way to deal with the frustration of a city wide traffic jam for 2 weeks straight. Let people walk everywhere and drink everywhere. As long as I’m not dead by 2024 I’m in.