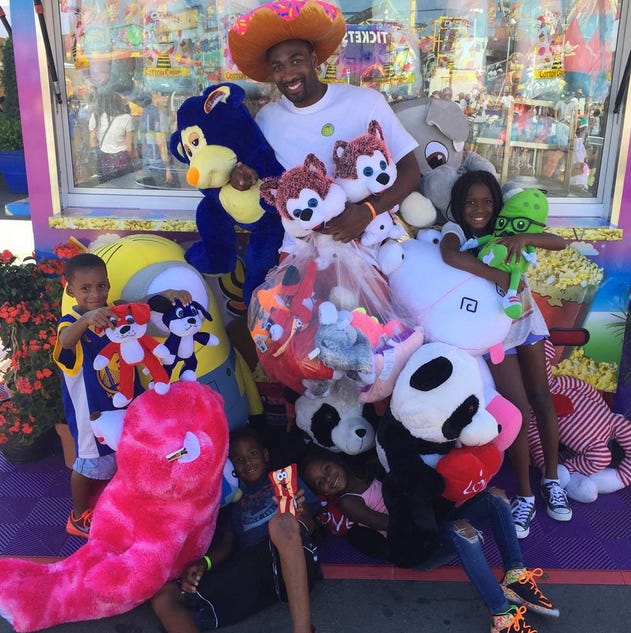 That picture of Gilbert Arenas wearing a sombrero surrounding by 100 stuffed animals is so fucking funny. Just thinking about the fact he is banned from playing basketball games at the fair because he was wiping them out is hilarious. And you know he was actually screaming HIBACHI the entire time because that’s what Gilbert Arenas does, no matter if he’s on an NBA court or the Orange County Fair winning panda bears and Minions for his entourage of kids. Just scroll up again and look at the fact he’s carrying a jumbo bag of even more stuffed animals. Like he spent hours just shooting hoops at the fair and then passing out stuffed animals to his kids until they banned him. I fucking love Gilbert, he’s such a maniac. Everything he does is so funny, so over the top, but so innocent too. Has a zillion dollars and still has that competitive nature to him. If only he didn’t poop in his teammates’ shoes and then bring guns into the locker room, and then immediately blow out his knee, he could have had a really good NBA career. But now it looks like he’ll just travel the county fair circuit scooping up all the teddy bears instead. And hopefully he wins a few goldfish along the way. And by a few I mean I hope he is carrying one of those jumbo bags, but filled with like 50 goldfish. Would be the perfect.

PS: We used to go to the county fair every year and win goldfish. Mine never lived long at all, just flushed those things after a week or so. But one year my dad won a fish and I shit you not it lived for a good 12 or so years. It just never died. It kept growing too. Was the most massive goldfish you’d ever see. I think the trick was it’s bowl (then tank because it got so big) was next to the microwave. Radiation baby. I’m actually shocked it never grew legs or a third eyeball. But if you want to keep your fish alive, put it’s bowl near the microwave. Tried and true.