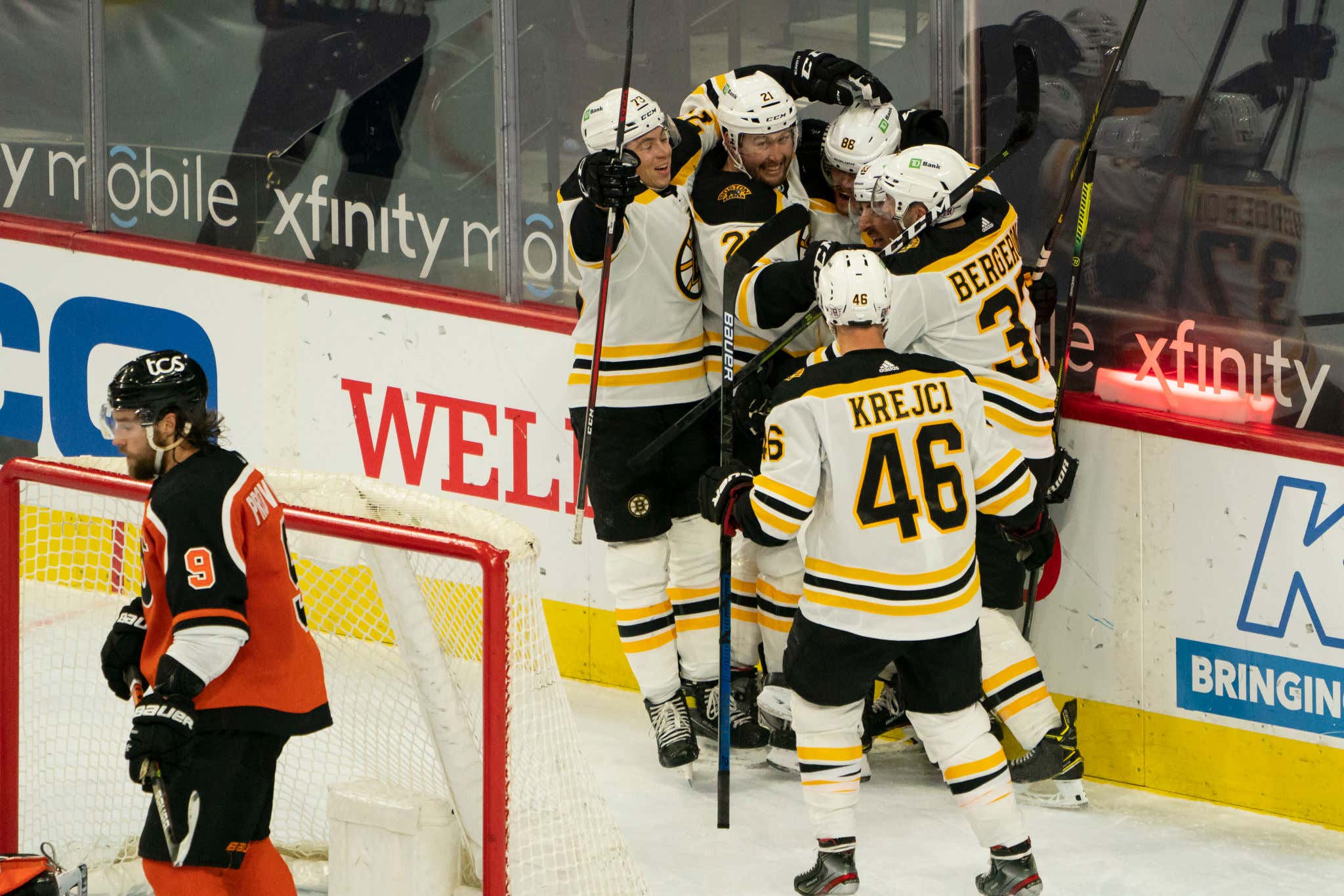 A few months ago I made the plea to Mayor Kenney and the city of Philadelphia to allow fans into Lincoln Financial Field to boo the shit out of the Eagles.

It was after a week 2 shellacking by the LA Rams. I knew at that very moment that if there were any hope at all for this team, it would hinge upon the fans being allowed to relentlessly bully this team in person. And for 3 games this season, the city allowed a small portion of fans into the Linc. The Eagles went 2-1 in those games. I'm not much of a math guy but going 2-1 in home games with fans in attendance as opposed to 1-3-1 in home games without fans seems pretty significant to me. I'm not saying that fans deserve all the credit for any Eagles success, but the numbers speak for themselves. I was unsurprisingly correct. That organization fucking SUCKS when they don't have to worry about 69,000 rabid Eagles fans booing the shit out of them when they are complete and utter disappointments.

Which brings us to the Philadelphia Flyers. A team that despite a great record out of the gate, this team has failed to put together a full 60-minute effort this season. A team who can give up a goal in the first 12 seconds of a game…

…then find a way to settle in and build themselves a nice little 2-goal lead after this spicy snipe from Joel Farabee.

Only to then completely shit all over themselves again and blow yet another 2-goal lead.

In 5 out of the last 7 games, the Flyers have blown a 2-goal lead at some point throughout the game. They were up 2-0 in the first game against the Bruins this year before giving up 4 goals in the 3rd period and losing in a shootout. They were up 2-0 in the first game against the Devils, the game was then tied 2-2 before the Flyers put in 3 in the 3rd period. They blew a 2-goal lead in both of those Islanders games over the weekend before winning both of those in overtime. And then last night after going up 3-1 in the 3rd period, these fucking idiots let this happen.

And not only did they just "let" that happen, but the actively participated in their own demise. Trying to secure a huge regulation win against one of the best teams in the division and these morons go ahead and take 3 penalties after taking the 2-goal lead, and they get scored on all 3 of the ensuing powerplays. TWO (2!!!) of those penalties coming in the final 2 minutes of the game. 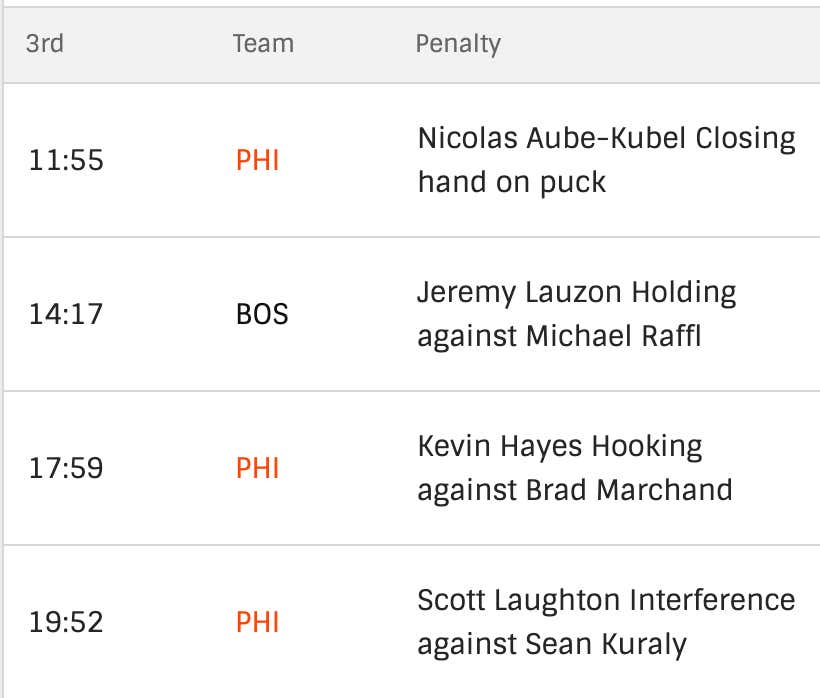 Are you kidding me? How dumb do you have to be? How is there any world where Scott Laughton shouldn't immediately get hit with the healthy scratch for the next game for taking this penalty with 7 seconds left.

That's not a weak call from the ref. That's a lazy, frustrated decision from Scott Laughton. That's blatant interference because Scott Laughton was mad about the Flyers blowing another 2-goal lead. Such a low Hockey IQ decision to make. Boston had all the momentum after tying up the game on back-to-back PPG's, and Scott Laughton decides to hand them another. Wonder how that decision could possibly work out. Oh yeah, that's right…

It's pathetic. This team is abysmal while playing with the lead. I don't understand it. I can't wrap my head around how quickly they take their foot off the gas once they have that 2-goal cushion. 5 out of the last 7 games! And in one of the only 2 games they didn't blow a lead, it's because they never had one to begin with. They got shelled by Boston 6-1. So yes, this team has been finding ways to pick up points. But they've looked downright horrific while doing so.

And the only hope for this team moving forward is to let fans into Wells Fargo Center to boo the shit out of them. Force them to keep their foot on the gas by constant bullying. Whatever AV is saying to them clearly isn't getting the point across. So maybe they just need a few thousand drunk, angry Flyers fans hurling down a tsunami of boo's their way to give them the kick in the ass they need. I just wish the elected officials in this city actually gave a shit.

Sidenote: Gritty needs to go away for a few weeks. I am so sick and tired of this scumbag. This stuff is funny when the Flyers are a certified wagon and dummying everybody they come across. But it's infuriating when the Flyers are constantly proving themselves to be the dumbest team in the league. There's a time and a place to hang full dong, Gritty. Right now is neither for you. Take a hike. 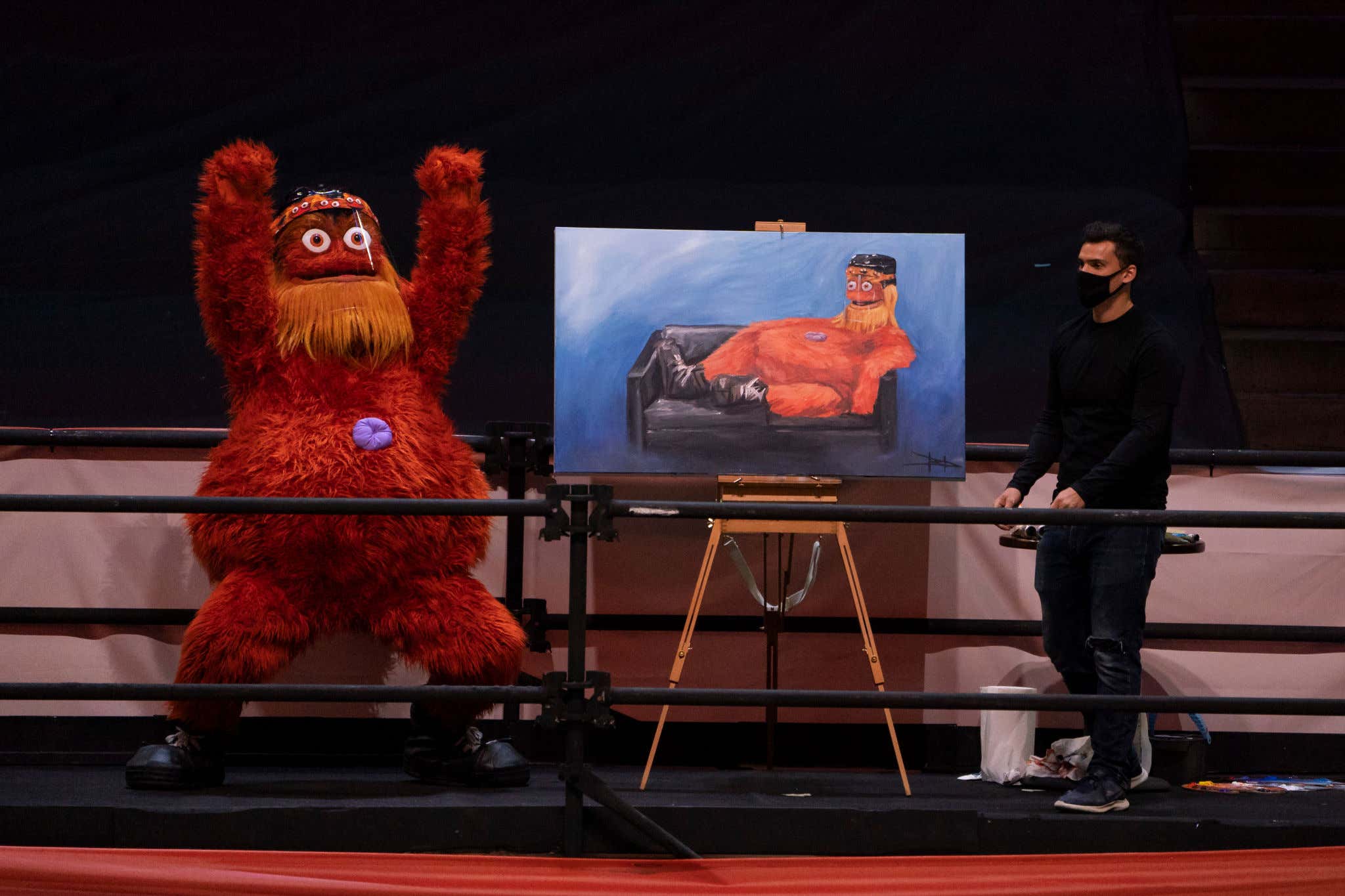 Ban Gritty until the Flyers go 5 games without blowing a multi-goal lead.