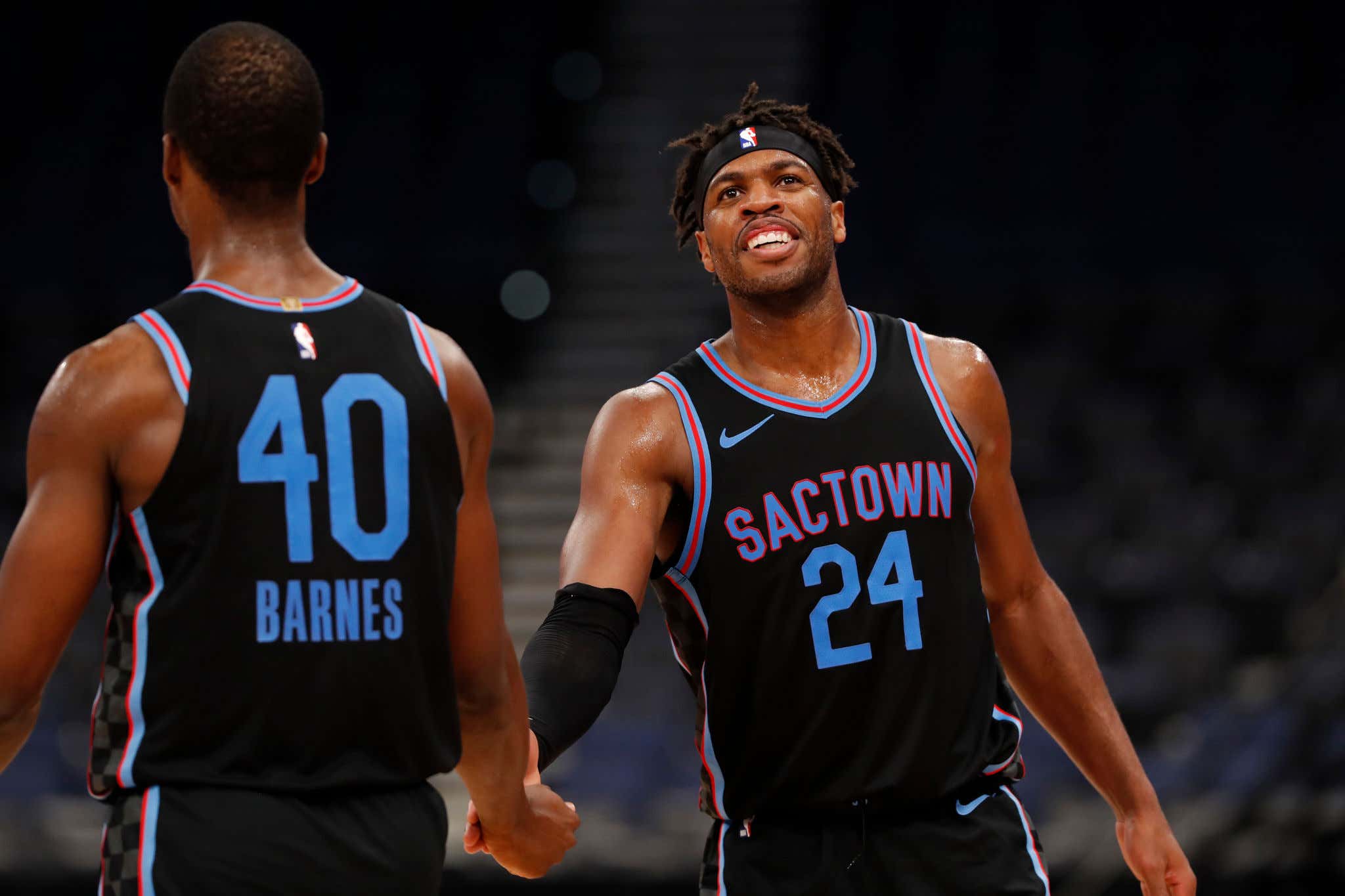 One of the hottest topics among Celtics fans is what the hell is Danny Ainge going to do with the Gordon Hayward TPE. Once you get through all the "nothing" jokes, people want real names. At this point in the season it's hard to say because we aren't really sure who exactly will even be sellers by the time March 25th rolls around. With the play in game now being a thing, so many teams are still alive. There are teams like the Magic who may be a legit seller candidate mostly because they've been absolutely destroyed with serious injuries to all their main guys. We're already hearing rumblings of the Pelicans being willing to trade pieces, and obviously, teams like the Pistons/Wizards/Wolves should be looking around to flip whatever they can for future assets.

Well, one of the intriguing teams that might have some decisions to make is a team we'll see the Celts play tonight in the Sacramento Kings. They're still somewhat alive for the play in game at 9-11, but that could certainly change in two months. Especially now that the Warriors and Spurs are better than most thought and you have to think the Mavs will eventually figure it out and stop being so terrible. There's a good chance that the Kings are one of the teams that do decide to sell some pieces, and we're going to get an up close and personal look at who those guys might be tonight.

In looking at their roster, there are some interesting names that technically do fit what the Celts need and should be looking to address with that TPE. 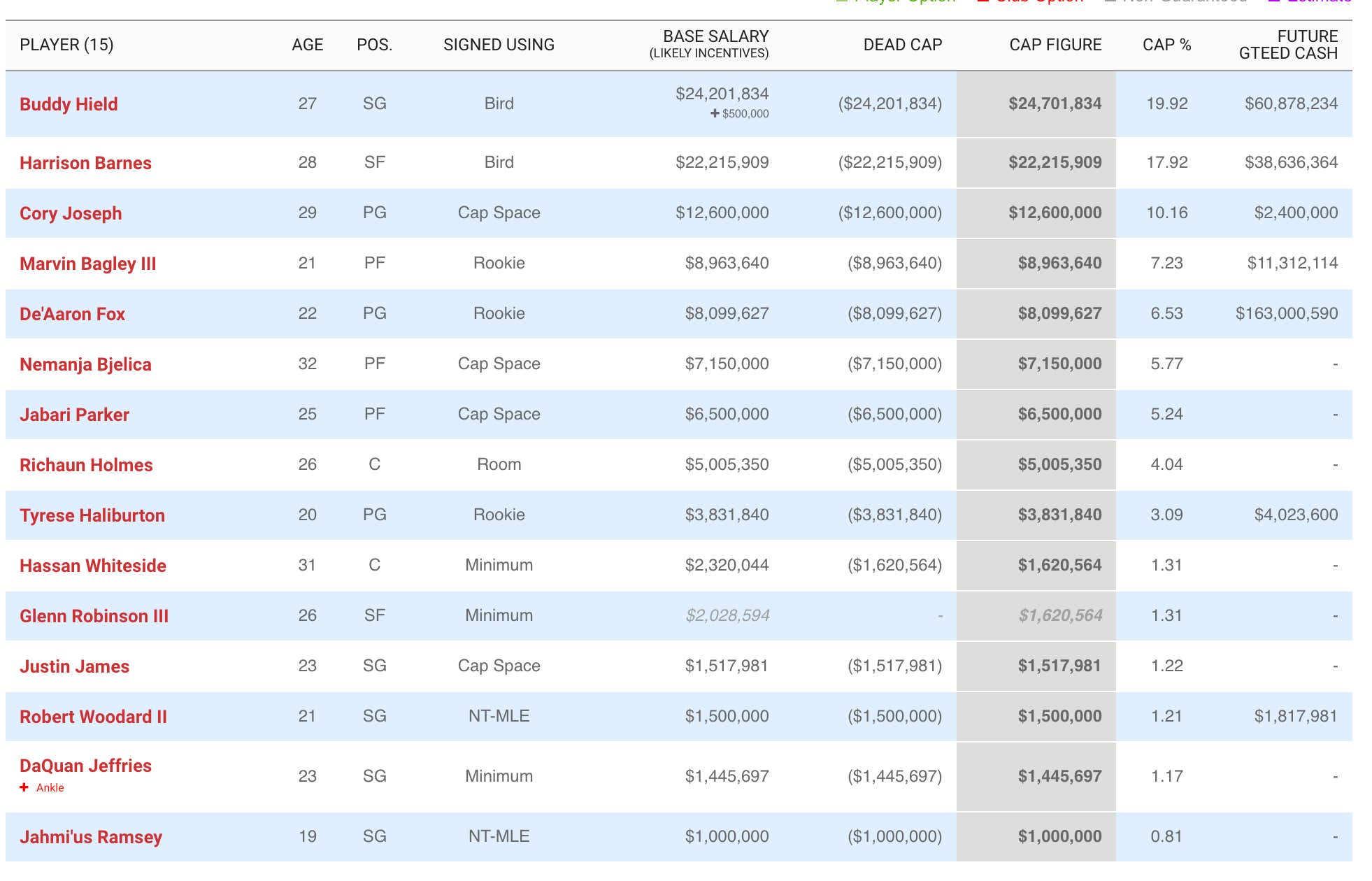 One big time reminder here for everyone. For any move done in season, the Celts actually DO NOT have the full $28M to use. Without sending any money out, they can only use around $19.6M. That's a very important detail I feel like people continue to forget. They also can't do that in the same deal. You're not allowed to pair players + TPE to generate more space. That means they have to move salary first for picks or some shit to create space, THEN use that higher TPE number. That's no big deal because to add anyone to this roster, someone has to lose their roster spot. They also only have to worry about that first year salary fitting into their hard cap. Anything after that doesn't really matter.

So if you look at the Kings cap sheet, right off the bat someone like Buddy Hield or Harrison Barnes is out unless there are separate deals in order to free up that money. For the sake of this blog, I'm just going to assume that happens if Ainge is actually going to use this TPE.

The next piece of the puzzle is which of these guys would the Kings even be willing to move if they were to be sellers at the deadline. The best place to look is guys that are coming up to the end of their current deals. For example, someone like Buddy Hield is going to be way more expensive in terms of player return because he has 3 more guaranteed years on his deal. They also just traded Bogdanovic to give Hield more of a role, so I can't imagine he's truly going to be on the market. If he is, it's going to cost you a good portion of your young talent in return plus more picks than Ainge probably wants to give.

A hot candidate you'll see float around Twitter is someone like Harrison Barnes. He's attractive for a few reasons. First, he has two guaranteed years left on his deal after this season, and his salary actually decreases in each of those two seasons. His age fits the timeline of the players on the current roster, and most importantly he has experience with being a supporting role player. He gives the Celts wing depth which they desperately need, and he can be that main scoring option on the second unit. Could it cost someone like Romeo? Probably. Look at that roster, it's not like the Kings are loaded at that position so if you want to upgrade the bench you're going to have to pay the price.

A name I was maybe interested in at the beginning of the season is someone I am now all set with. Nemanja Bjelica. He's a stretch four which this second unit could certainly use, but he's only shooting 21% from three this season. He barely plays and given his age the Kings will definitely try and shop him, but I'm not interested in blowing a chunk of the TPE on a player like this. He's a career 39% three point shooter and was over 40% in each of the last three years, but he so far hasn't been the same guy.

Now this might be a stretch, but if I'm Ainge, I ask about Marvin Bagley. Things are rocky with him and SAC, and while he has started to turn things around from a production standpoint, maybe this is their opportunity to get out of that contract before they have to make a decision on his RFA. He could absolutely be a guy who takes a leap once he gets a change in scenery. We all know the Celts should be looking for big help, and who knows maybe you can convince the Kings do to Kings things and flip Thompson's contract and other assets. Any GM with a brain doesn't do that, but these are the Kings we're talking about.

We've seen situations like this before when it comes to auditioning for the TPE. Most recently a guy like Thad Young and the Bulls comes to mind. Kelly Oubre was another one from last night (didn't look great!).

If the Celts are going to look to address their wing depth/shooting with this TPE and they plan to do it in season, they're going to get a great look at two potential options tonight on a team that has a real chance to be an actual seller in about 6 weeks. Make sure you pay attention.