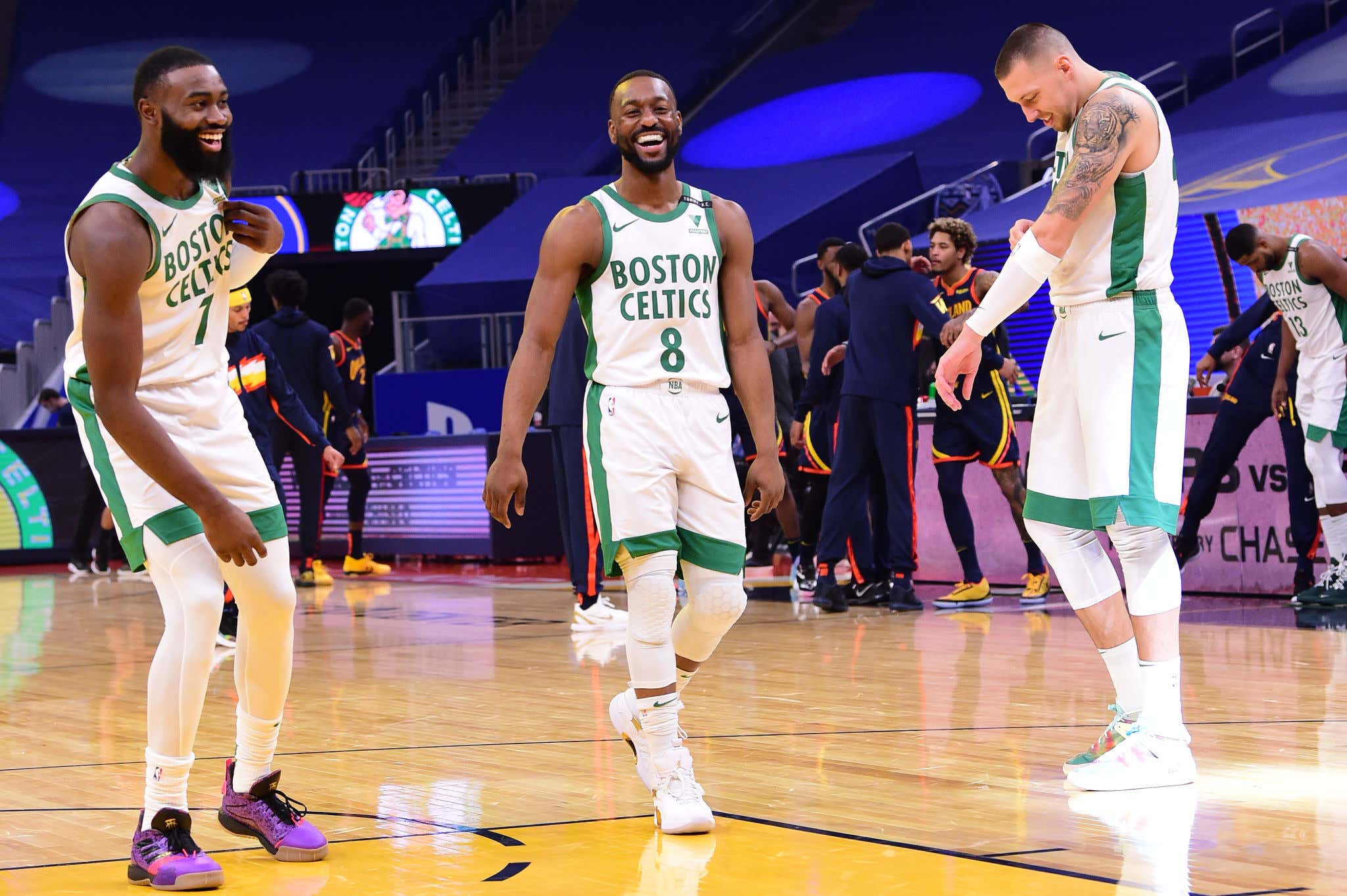 Heading out on a West Coast trip is always a challenge. Weird shit usually tends to happen, and I'm already preparing for it to rear its ugly head at some point over this 5 game trip. For the Celtics, a team coming off back to back heartbreaking collapses and now without Marcus Smart, this road trip is even more important. You look at their schedule (GS/SAC/LAC/UTA/PHX) and there aren't too many layups on the horizon. So the fact that they got things started with a nice win in the Bay in a game where Steph went kind of nuclear was a huge relief. Hard to kick things off better than that.

Was it perfect? Lord no. For crying out loud they almost blew it AGAIN in the fourth quarter, but finally, we saw this team hold on and do just enough to pull out a win. That's all I'm looking for at this point. Stack wins. I don't care how you get them. I don't care how they look, just find ways to win close winnable games that you should not be losing. With the likely reality that Kemba will sit tonight in Sacramento, last night was one this team had to have in order to get this trip off on the right foot. The hope is this momentum snowballs for the rest of the trip, and frankly I think this team can play even better than what we saw last night.

Now I know it was late for pretty much everyone, so let's catch you up on what you may have missed.

- You ever find yourself watching a Celtics game and thanking God that Jayson Tatum is in your life and playing for your favorite team? No? Just me? That's weird, you should try it. Give your thanks for this unstoppable basketball force. They don't come around too often

Add this game to the list of another team that had no player on the roster that could slow down or handle Jayson Tatum. Basically, the Warriors are like every other team in the league in that regard. We've yet to really see it from anyone. Not even the defending champs. The only thing that's been able to slow Tatum down this season was covid, and that's the reality.

How many times did we see this team have an awful offensive possession only for Tatum to have the ball at the end of the shot clock and bail them out with a big time make? The level of confidence I feel when I watch Tatum offensively is so high I can't even explain it. You never have to panic because it is clear he is able to get whatever shot he wants against any defender in the entire league. When it came time to close things out, it was Jayson Tatum who led the Celts with 8 fourth quarter points. On the defensive end, neither Wiggins nor Kelly Oubre had more than 2 points, and those were Tatum's primary assignments.

We all know that if the Celts are going to have a successful trip, Jayson Tatum needs to show up in a big way and that's what we got last night.

- And then there was Jaylen. You know what's crazy? The man had 18/10/4 and it wasn't even one of his better games of the season

Take a second and realize what that means for Jaylen's development. In years past we all would be over the moon with 18/10/4 from Jaylen. Now it's basically like….yeah…this is what he does. It's wonderful.

Now I won't lie to you, he started off the game by not being able to throw a pea in the ocean. It felt like he was going for the homerun play or make too often in the first half. But that flipped over the final 24 minutes, Jaylen was much more aggressive at attacking the basket and finished 5-10 for 11/6/3 in the second half. It was the version of Jaylen we were all accustomed to seeing. Much like Tatum, the Warriors didn't really have any defender that could stay in front of Jaylen, not even Draymond Green.

When fire and ice are both doing their thing in the same game, this team is very tough to beat. At the very least they'll always be in the game which is why this next guy is so important.

- I thought this was one of the few times since Kemba came back into the lineup that he looked like Kemba. The quickness, the burst, the types of shots he was making, he looked as good as he did at any point when he was fully healthy. The efficiency still hasn't come yet, and it very much needs to, but from the eye test alone this was a version of Kemba that should have you relieved.

We saw his patented step back, he showed the same quickness off the dribble, he was active on the glass (7 rebounds), and didn't have a turnover in his 30:30 of action. I don't want to make it seem like he was perfect, the 6-18 bullshit is not going to cut it, but I saw a player from a physical standpoint that is what this team needs.

- I still have no idea why people don't think Daniel Theis is good. What more do you want him to do exactly? Oh so he can't guard Joel Embiid by himself. Find me a big who can, they don't exist. Meanwhile, he was huge on the boards, was GREAT defensively, and is back to making his threes on a consistent basis. Did you know he's up to 38% from three on the season? Do people think that grows on trees and comes at his pricepoint?

What we learned is that against teams that play small like the Warriors were forced to do, Theis can thrive.

- You knw who else this is true for? Grant. Easily his best game of the season without question. Not just the big time threes he was making, but how he looked defensively, his rebounding on both ends, and then some clutch FTs late.

For a guy in and out of the rotation, it's hard to know what you're going to get from Grant. If it can be more of what we saw last night, Grant will play consistently. Did you know he's shooting 46% from three right now? If he's able to continue to be a consistent corner three point shooter, think of what that does for the offense. Especially now that Tatum has the improved vision to spot him in the corner while he posts up. That's a real weapon.

- Credit to where it's due, this was also Tristan Thompson's best game of the season with his 15/8 on 5-5 shooting. Again, a big part of that was the fact that GS had to play small, but I don't give a shit. Thompson has struggled so bad this season that I'll take whatever the hell I can get.

- I cannot stress enough how nice it was to see this team not blow another fourth quarter lead. They made it hard on themselves for sure, but in the end they made enough plays to pull it out. I'm not sure we were all confident that would happen as Curry started to cook in the fourth.

- A 51-36 rebounding difference is not something you see often, and it was a big reason why the Celts pulled away in the second half. You combine that with a 16-9 points in the paint difference and it was nice to see the Celts exploit a GS weakness since all their bigs were out.

- I don't know what the defensive plan to start this game was for Steph Curry, but the "leave him open for wide open threes" is something this team should never do again. Whoever came up with that one shouldn't be allowed to make gameplans. That was bad. You knew after his first make that this was going to be a problem. I will say they were much better in the second half, they doubled him early, they chipped him off screens, that third quarter was an entirely different approach, but I need that to be the plan from the start next time.

- The one thing that has me a little nervous on this trip is the carelessness this team still has with the basketball. It may not have hurt them last night, but I can promise you it will against some of the other teams on this trip. A total of 15 turnovers and nearly half coming from your best players (Tatum 4, Jaylen 3), that's a problem. With Smart out, the Jays are going to have to handle the ball way more and bump up their playmaking production. That's just a fact. Well, we can't suddenly have them turning it over 7 times a game with this new role. They have to be more careful with the basketball.

- Jeff Teague has me in a preztel right now. Blog after blog after blog I beg him to give me between 8-12 points on efficient splits. Well, he gave us 9 points on 3-6 shooting but I'm sorry if you watched it you know what I'm talking about. It was brutal. He simply does not look like an NBA caliber point guard. He certainly doesn't look so good that someone like Carsen is a DNP-CD. I just don't get it. How does someone forget to play basketball? I'm not even calling him washed. I'm saying he looks like a player that has never played the sport before. The same Jeff Tegaue that used to ruin our lives on the regular for years. Now he's on the Celts and he can barely dribble or effectively score on a 1 on 0 fast break. It's insane.

- I know Theis/Thompson played well, but only 8 minutes for Rob? Really? Wayyyyy too low. I was also sad we didn't get any Nesmith minutes against a team that went small. Why not try and find pockets to get these guys some burn and maybe find a rhythm for later in the trip?

- The only thing that really stands out is what happened from 4:00 to about 2:24 in the fourth quarter. Jaylen had an easy dunk to put the Celtics up 10 and you thought "OK nice, surely they'll be able to ride this lead out no problem". HA! You moron. Instead what happened is what always happened. They didn't score a point for a huge stretch of the quarter. Any points would have done, but instead it was turnovers and missed long jumpers. There was no aggression offensively and it nearly cost them another winnable game.

I'm starting to really hate the Celts offensive approach in the fourth quarter. It just feels like their quality of shots are always so bad. We're banking on Tatum making some ridiculous fadeaways or threes in order to score. I don't know what happens to their collective brains to make them play this way, I don't know why Brad can't fix it by calling actual plays, but it feels like once they get to the final 12 minutes their shot selection sucks dick.

- I find it comical that Jaylen Brown, someone who actually was aggressive, took 1 FTA. One. Then again, is anyone surprised?

It was not exactly what I would call a consistent whistle. That's the bullshit this team is going to have to play through on the road though. Keep your mental focus and execute. Don't go in a funk because you aren't getting obvious calls. Apparently you're allowed to dive into the legs of someone on a fast break. That's good to know!

All in all? Starting the trip 1-0 is all that matters. Coming back tonight in SAC and building off that win is the next step. We've seen weird shit happen in SAC for years now, so prepare yourself. Yes, Buddy Hield is going to make 7 3PM, be ready. I'm just happy this team finally won a game because holy shit had it felt like forever.