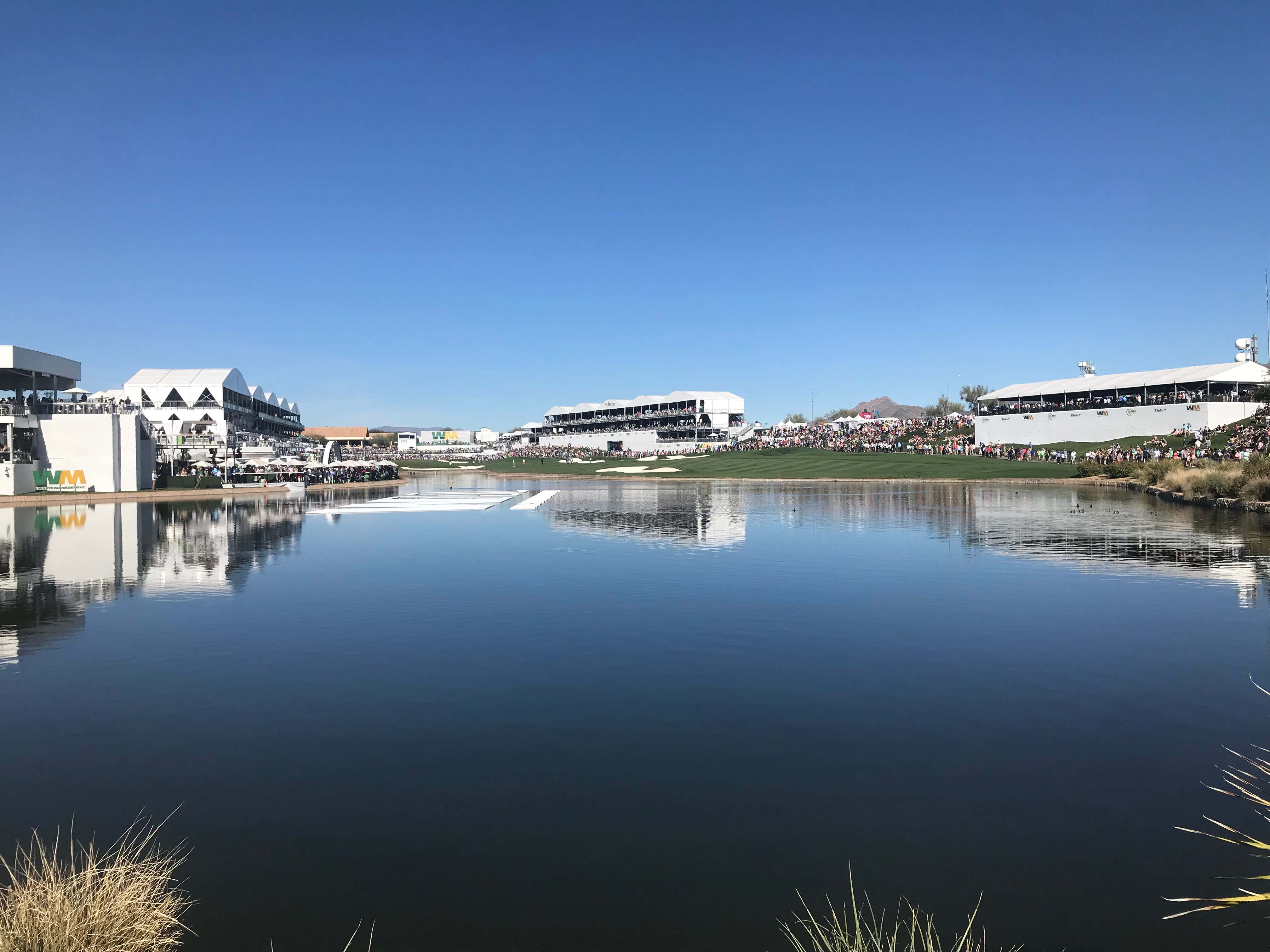 Damn. What an absolute shame that this whole rona thing is still running rampant. The Waste Management is renowned for being the People's Open. The tournament that attracts the most fans and the rowdiest crowds on the entire Tour. Anyone who's been will tell ya it's a blast. I'll second that notion, especially given that it was the last sporting event I went to before all of this.

The 16th hole has given us great entertainment and iconic moments as it's grown and grown over the years. There was no way this clip wasn't going to make it into this blog so I might as well throw it out there now.

The carnal yell from the entire crowd the exact instant he makes contact is what I probably love most. You just don't get that anywhere else. There will be less than 10% of the normal crowd there this week, so it'll be interesting how they control the numbers around #16 and how much noise those select few will make.

Regardless, there's a lot more to this tournament than just one par 3 and the massive crowds. TPC Scottsdale is a well respected course that generally draws a good field - and this just might be the Waste Management's best field yet. Jon Rahm, Justin Thomas, and Xander Schauffele have all made this a routine stop on their schedule, and Rory McIlroy actually makes his debut at TPC Scottsdale. All of them are looking to knock off world #9 Webb Simpson as he defends the title he won here last year.

The 2020 edition was a classic. It looked like it was Tony Finau's all the way, the tournament that would finally be his break-through and open the floodgates for him. Next thing you know Webb went birdie-birdie-birdie including a 17-footer on 18 to push it to a playoff.

Webb would go on to birdie the 18th again in a playoff and send Finau home without a trophy yet again. Tragic. Here's your final leaderboard from 2020:

The Stadium Course at TPC Scottsdale is a Par 71 measuring 7,261 yards. It was designed by Tom Wieskopf and Jay Morrish and built in 1987 and has hosted the Waste Management Phoenix Open ever since. It was built with the same idea as TPC Sawgrass in that it was built for spectators - there are large mounds surrounding nearly every green and you can virtually see the entire golf course from wherever you're standing. That's a huge part of how this tournament became the massive success that it is.

It's not a terribly long track and isn't terribly narrow either. If you go wayward off the tees you could find yourself in the desert waste area (or behind a boulder), but overall the rough is hardly punishing. It's your quintessential 2nd shot golf course that rewards ball-striking and positioning on approach. The large greens here run firm and fast and are protected by a lot of bumps and knobs and shelves. The Par 5 3rd green especially comes to mind when I think about how hitting the dancefloor here most definitely does not guarantee a 2-putt. There's also water lurking on 5 of the 18 holes, all of them on the back 9 which can make for a thrilling finish. The opportunities (like most courses on Tour) are on the par 5's. There's 3 of them and they are all extremely reachable for these guys. Gotta take advantage there and on the short par 4 17th. 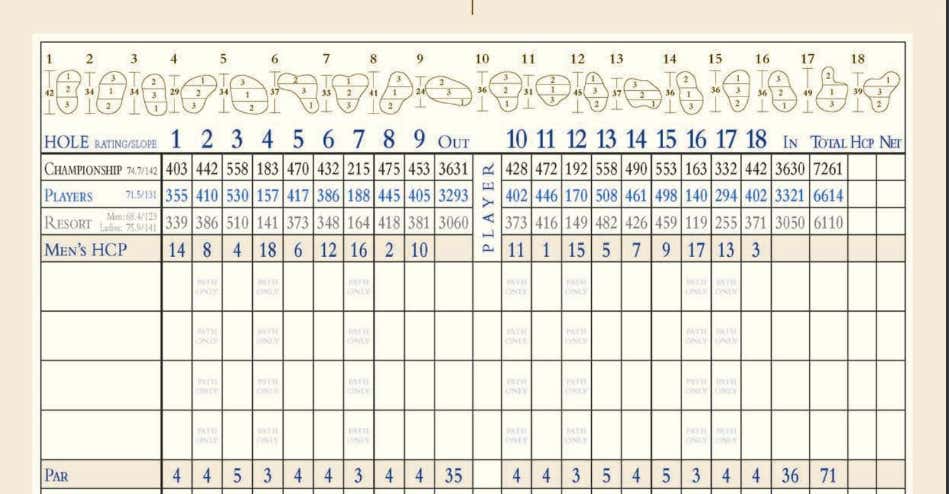 CBS is busy showing some football game on Sunday, so NBC has the weekend coverage.

Featured Groups on PGA Tour Live this week are excellent. Coverage starts at 9:15 AM on Thursday and Friday with these guys. 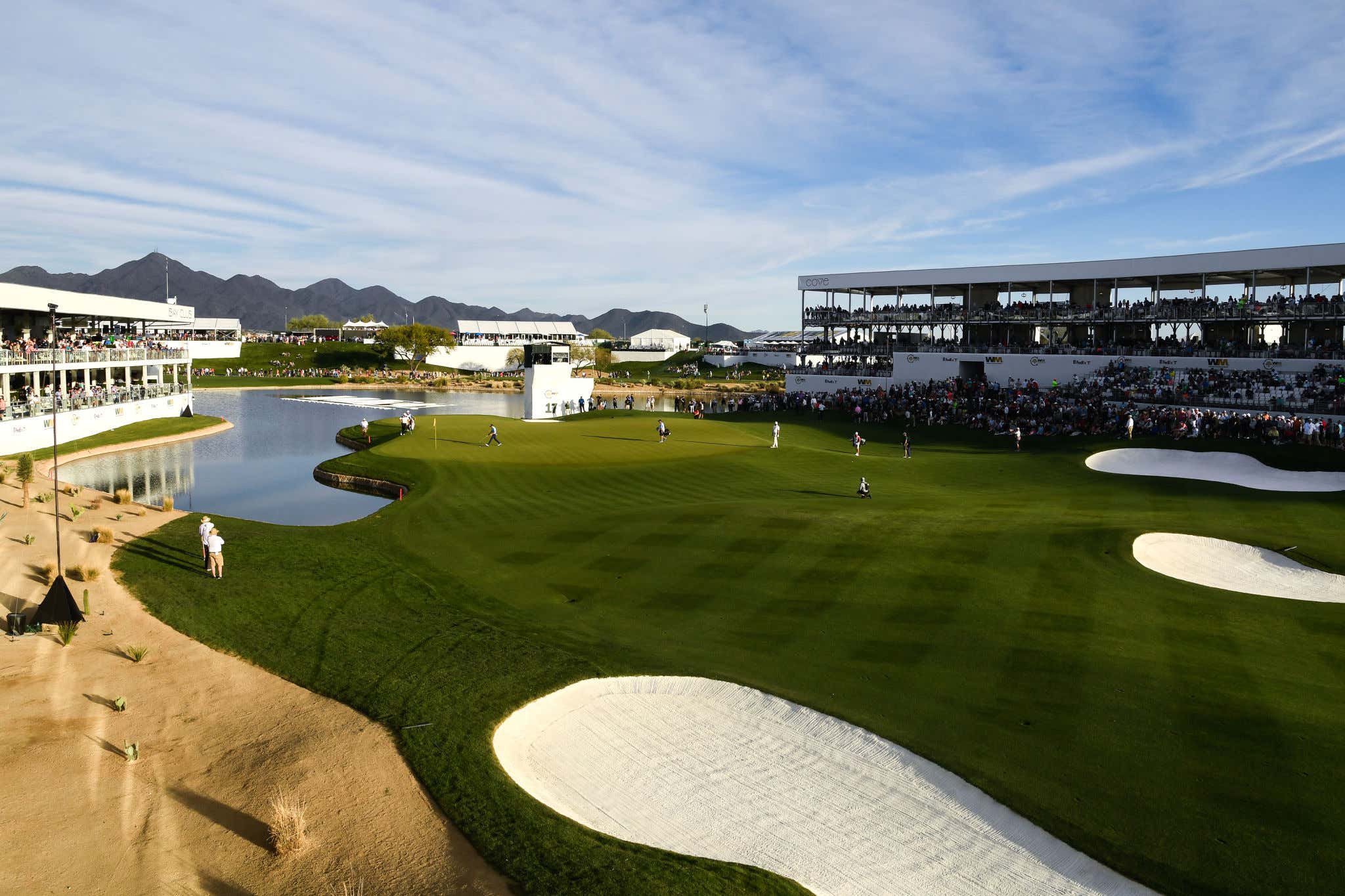 Yeah yeah, I know. The 16th hole is iconic. It's a giggle of laughs. It's chock full of great moments and there's no experience like it anywhere in this entire sport. All of those things are great and I love that hole for it. But it's also about as straightforward of a golf hole as there is. I know, blasphemous.

People don't appreciate what a gem the 17th hole is enough. They should build a BIGGER stadium around this bad boy. It's a short par 4 that's driveable for most with a fascinating green layout and water lurking left. It's extremely risky to go right at it because of the way the fairway slopes towards that water front left and the steep hill on the backside of the middle fairway bunker. But ultimately it's a fascinating opportunity for players to weigh risk/reward and try to pick up 2 strokes on their card. A lot of the field tends to bail out short right early in the week and leave themselves a good angle for a pitch. Especially when they put a pin in that back left peninsula, which they often do on Friday. Then you start to see guys take a rip at the green a little more on the weekend. I love a hole that can shake things up down the stretch in a tournament and this hole has it in spades. It even has the Tour's only hole-in-one on a Par 4 in history. Pretty wild story where it actually banked off the putter of one of the players in the group ahead on the green. Crazy stuff. All in all this is one of my favorite holes on the entire Tour and I wish it got more of its proper due. 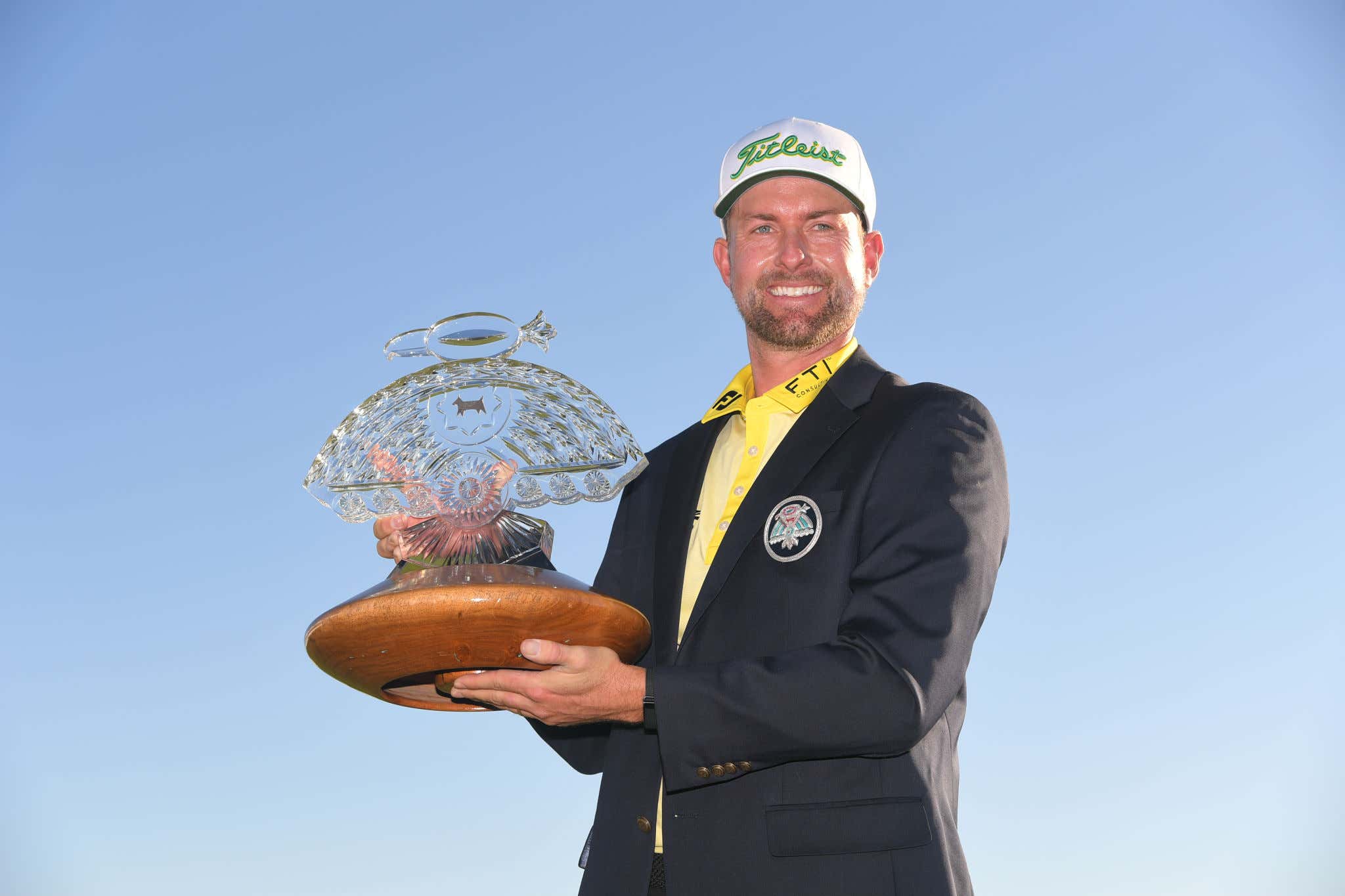 I'll be honest, I'm a little confused as to what I'm looking at. It's… it's like a bird? Like a mallard? Actually my quick research tells me it's a crystal Thunderbird in honor of the Phoenix Thunderbirds' convention, tourism, and charitable organization. They're basically the hosts of this event. Since they've done a helluva job with all of that (and the fact that they may have had some hand in creating the beauty that is Old Town Scottsdale, IYKYK) I'm going to take it easy on them and give this trophy a neutral 5/10. 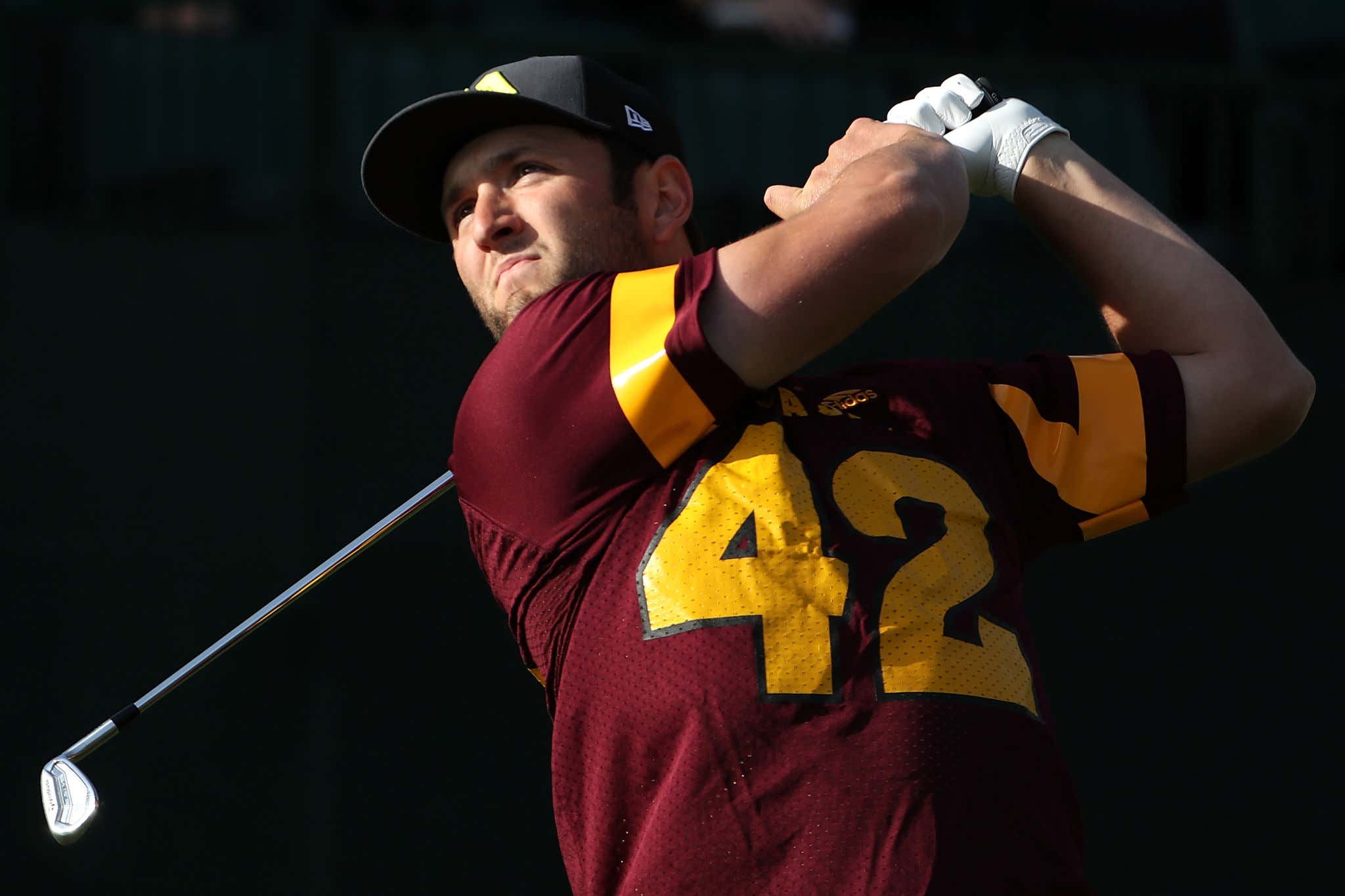 Jon Rahm is the favorite here at +600. He's an Arizona State alum, so this is as close to a home game as he's gonna get stateside. Handicappers are probably right to make him the favorite pretty regularly at this point, but +600 is a pretty steep price. He has very solid results here, but has never placed better than 5th. I imagine he'll be in contention but I just don't like that price enough.

JT and X are right behind him at +750 and +800 respectively. Both great golfers like Rahm, but this makes for a very top heavy betting board. It's uncommon to see 3 golfers well inside 10/1 at a full field event. For my pick I'm actually gonna roll the dice and take the debutant here, Rory McIlroy +1100. He's played some very solid golf the last two weeks between Abu Dhabi and Torrey Pines, but let one bad nine ruin his chances at each. I think it's only a matter of time before he puts 4 rounds together and wins. Plus if this course slightly favors a shot shape, it's a draw and Rory is one of the premier drawers of the golf ball on Tour. Guy is close and you're going to have a tough time finding him as the 4th favorite at any event. Midas whale cash in now.

Here is the rest of the top of the board:

Further down the board I'm going to ride with Bubba Watson +5000. Sneaky good results at this course and has finished 3rd and 4th here the last two years. He's also got two runner-up finishes within the last 7 years. Better yet, he's actually 9th on Tour this year in Strokes Gained Approach, averaging nearly a stroke a round. He, like Rory, shapes it right-to-left and I think +5000 is too good a value to pass up. Even if he doesn't win, all you need is him in contention to hedge and make yourself a nice little payday. I'd take him Top 5 and Top 10 +900 and +400 too.

Rickie Fowler Top 20 +180 - 2019 would kick my ass for not jumping at this. A little more reasonable than Spieth but I still don't understand how we got here.

Finish In A Playoff +350 - Might be a public pick but 4 out of 5 years this thing has gone to a playoff and leaked into the first quarter of the Super Bowl.

SPECIAL Tony Finau To Win The Saudi International +1400 - (WARNING: This is merely a FOMO pick. Been chasing that Tony win for like 4 fucking years and this time I'm chasing his ass all the way to the Middle East. There's just no way I'm going to miss the boat. This pick will be a mainstay here for the foreseeable future, ride or don't.)