According to Bandt.com (an online ad & media journal):

A study by Oracle has found that twice as many people will be watching the super bowl alone or with a virtual party this year.

While the study says people are just as excited for this year’s Super Bowl as in previous years, they won’t be spending the Big Game day with friends over piles of wings. Instead, 8% of respondents plan on attending a virtual party.

Twice as many people as in previous years will be watching the Super Bowl on their own, which perhaps explains why almost equal numbers (21%) of people will be wearing pyjamas as those in fan gear.

In a true testament to freedom, 6% of respondents plan to watch the Super Bowl nude or in their underwear.

Of the three best Super Bowl experiences I've had thus far only one of them involved a fair amount of nudity… There was 1997 when my neighbor made an incredible, enormous multi-flavored jello football that I ate until I dry heaved & got yelled at by my parents, then in 2014 attending the Seahawks/Broncos game here at Metlife (game turned out to be a snooze-fest but I had open bar access all day & had an absolute blasty-blast), & finally my trip to Atlanta with Barstool in 2019. That's the one that actually did have nudity, whether it was via strip clubs or constant use of that stupid party-tits shirt or a bunch of us sharing an attic bathroom. 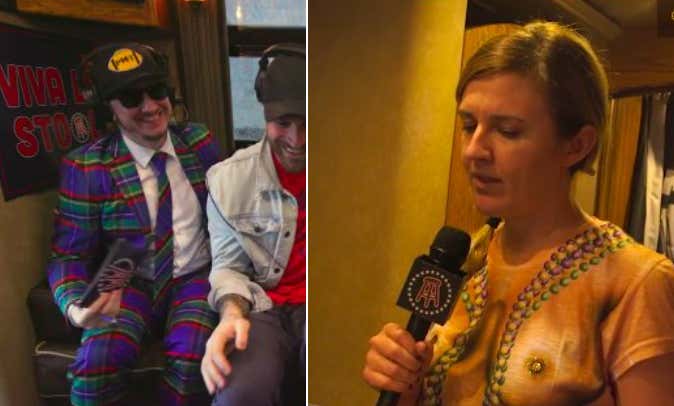 As for this year I'm not sure what the plan is. I can't drink right now which makes me vulnerable to becoming a designated driver for others, and for actually having to make eye contact and talk to people in a social setting fully sober. Neither of those things are my idea of a good time these days. Also, I'm at month 8 and don't want to catch COVID right before this kid is born & have to rip my taint alone with no one holding my hand, so laying low is probably for the best. Top case scenario, I fall into this sad 6%, try to make my own giant jello football & will indeed be in nothing but enormous Hanes & the party-tits shirt on the LaZBoy. Guess that study kind of checks out.

And is it just me trying to make myself feel better, or do a lot of Super Bowl parties have that same New Years or Bachelorette vibe where the gathering gets really, really hyped up but then it's just sort of ok and you wind up watching an acquaintance puke up a ton of dip and wish you stayed home anyway? Who knows.

If you thought that Oracle study was stupid or that I am stupid or you have plans for the Super Bowl that are actually fun but still also want to remind me that I'm stupid please drop a line in the comments.