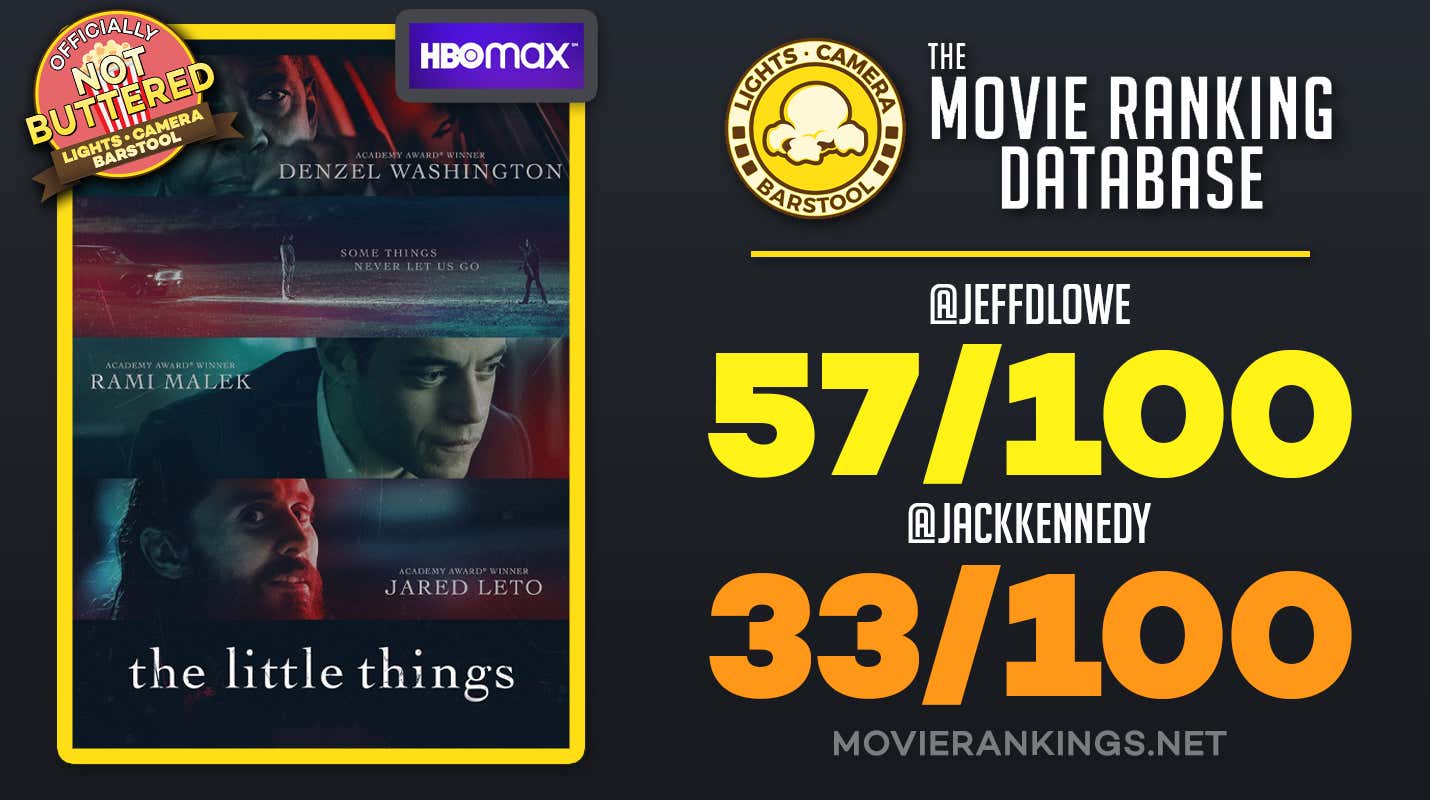 We reviewed this movie on our most recent episode...

...and went into good detail, but here is a quick written version of our thoughts. The movie is pretty much a bag of ass, but we elaborated on why we didn't enjoy it!

Deputy Sheriff Joe "Deke" Deacon joins forces with Sgt. Jim Baxter to search for a serial killer who's terrorizing Los Angeles. As they track the culprit, Baxter is unaware that the investigation is dredging up echoes of Deke's past, uncovering disturbing secrets that could threaten more than his case. (via Google)

JeffDLowe (57/100): With a star-studded cast, 'The Little Things' has all the makings for a classic, but ultimately amounts to nothing more than unfulfilled suspense, weird editing, and bizarre character development. Written all the way back in the 1990s, the movie feels dated and plays like a dollar store version of the notable mystery-crime releases from that era.

Calling this movie weird would be a complete understatement, and that's what I want to focus on right now. Yes, it has plenty of technical issues, especially in the department of writing, editing, pacing, and all of the other buzzwords I could use. But the characters being fucking bizarre, and how their stories play out is the real issue at hand.

Jared Leto's performance, and character, both don't really bother me all that much. But when you make a character this bizarre… he can't be less bizarre when compared to your "protagonist" detective character. What feels like a miscast, Rami Malek's role in this movie is incredibly confusing. He seems to be playing a completely different person than the one he is supposed to be portraying. From the facial expressions, down to the way he talks, and his mannerisms, it all comes off very odd. It also doesn't help that the turns his character makes in terms of development don't make much sense as the story plays out.

It's all just so fucking weird.

There are a fair amount of decent elements here with the movie, and I thought this was a nice Denzel Washington role. But too many major decisions derailed everything the movie offered. The beginning of 'The Little Things' offers some nice suspense, camerawork, and other elements that'll lock you in early. However, what plays out over the remaining chunk of the over two-hour movie will leave you either bored, disappointed or… both.

KenJac (33/100): “It’s the little things that get you caught”. That’s the line that Denzel Washington’s character repeats throughout the movie, pointing out that you have to focus as much on the minutia as the big picture. That might be fine and good for the world of crime, but in movies, maybe you should start by focusing on the big picture first.

From an acting perspective, Denzel Washington plays a boring version of his Equalizer character. He gives the best performance, but it’s not particularly interesting or challenging for him. Rami Malek is insanely miscast as a “Babyface rookie cop that plays by the rules”. He’s so naturally creepy that he makes Jared Leto, who is supposed to be the creepy character of the movie, completely redundant. Speaking of Leto, this was a very uninspired role for him. I might have liked it better if it wasn’t opposite Malek, but his role was just uninteresting and lacked any malice whatsoever.

From a technical aspect, I like the opening act of this movie a decent amount. It set the stage for something interesting to happen, but just never delivered. It boils down to being an archaic, formulaic cop drama that has nothing unique or interesting to offer. Even the “twist” at the end, if you want to call it that, is more or less telegraphed throughout the movie. The only thing saving this movie from being unwatchable is some solid set design and camera work.

--
The movie is Officially Not Buttered and is a gassy fart to start the year. You can head to Lights Camera Barstool right here to listen to our latest episode where we just went in-depth with reviewing this movie.