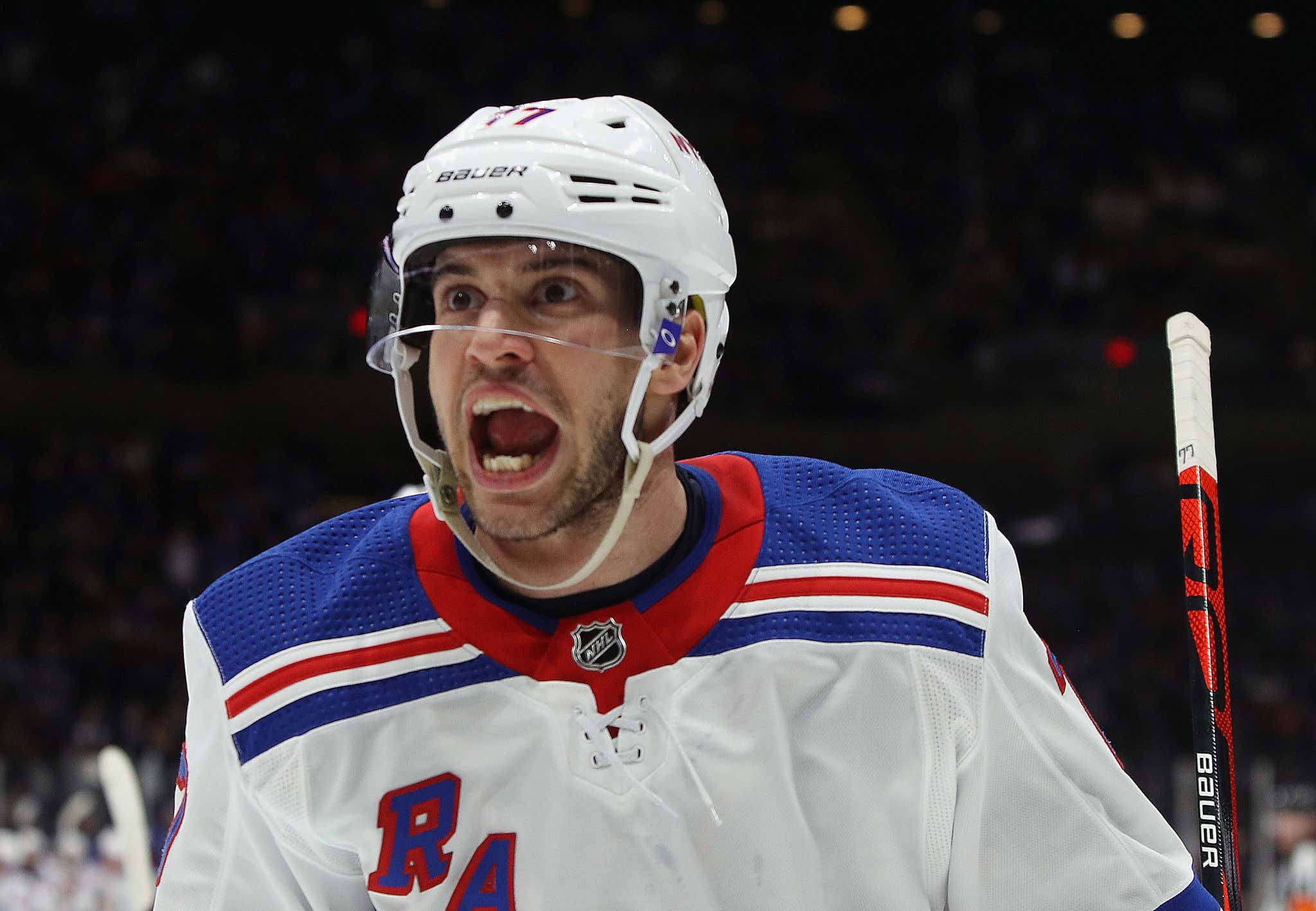 After Tony DeAngelo passed through waivers unclaimed, Blueshirts brass held a presser before tonight's tilt to address the situation. When asked if DeAngelo has played his last game donning a Rangers sweater, GM Jeff Gorton unequivocally answered "yes". He's had his run-ins in the past with Coach Quinn but apparently he couldn't move on from being scratched after taking an unsportsmanlike penalty near the end of their opening night throttling. In fact, tensions grew high enough to the point where Gorton flat out said if his name came up in anything else he'd find himself on waivers. A post-game altercation with your goalie certainly qualifies and Gorton stayed true to his word. He'll be assigned to the taxi squad but not permitted to be anywhere near the team as they look to trade him. They're not looking to terminate his contract.

Speaking of the altercation, the Rangers wouldn't go into detail other that to confirm "there was an incident" and Georgiev is fine. There's honestly no real reason they'd need to go into detail, address if there was a third man in (or who), etc. This surely isn't the first or last time teammates go at each other and when that stuff happens, teams usually don't come out with a play-by-play analysis. In this instance though it was the last straw for a player who'd been clearly warned he was on thin ice.

The other major point made to open the presser was when John Davidson flat out denied there were any issues at all involving rookie phenom K'Andre Miller. Rumors were swirling on Twitter last night after it was reported the Rangers organization was concerned with DeAngelo's treatment of Miller & several teammates were growing angry with it as well. This included an alleged incident with Tony keeping Miller's first-goal puck from him. Since those reports, Miller's agent and the Rangers have said there's zero truth to any of it. Interestingly enough, many of the people who first brought Miller into this storyline are sticking to their guns. Apparently their sources cannot possibly be infallible and anything to refute their unsubstantiated claims is simply PR rhetoric.

Listen, obviously organizations lie. That doesn't mean they lie all the time. Just like having reliable sources with a solid track record doesn't mean they're incapable of misinformation. Doesn't have to be on purpose. But continuing to involve K'Andre Miller in the crux of the DeAngelo drama is extremely unfair to K'Andre. We're well aware of what happened when he did a live Zoom with Rangers fans. I'll never forget the look on his face trying to ignore it and I can only imagine how often the color of his skin has been a topic of conversation throughout his hockey career. This didn't have to be one of those times. If the Rangers are truly burying racial issues within the organization then clearly that's a big deal - but it's also a big leap. And what are you saying about Miller's character (and his teammates watching) by insinuating he's sitting idly by like a good boy while being prodded by a teammate, unwilling to speak up? Who is being helped by this narrative being continuously pushed?

Now it's no surprise that, while they're looking to trade him, they're lauding DeAngelo as a well-liked teammate. I mean everyone said he was the funniest guy on the squad and class clowns are usually well-liked by peers but disruptive to the classroom. Regardless, when a team and player's relationship goes south, both sides usually don't go burying each other. They all say the same thing. "He was a great guy, it just didn't work out" and "I have nothing but respect for the organization for giving me a shot". This is common & doesn't mean there's some sort of coverup going on.

None of this meant to come off as me "protecting" Tony DeAngelo. Contrary to some belief, I promise he's not "my guy". He's gone and rightfully so. All I'm saying is, this situation is wild enough without having to conjure up some major conspiracy theory that affects an undeserving K'Andre Miller the most. Besides, if you truly believe it to be true without a shadow of a doubt - why the fuck are you even supporting the big, bad New York Rangers in the first place?