"I been callin' since YESTERDAY to get a salt truck up 'ere. The plow-trucker says they were up here, THEY WER'N. Public works #20 Salt Truck & Plow was parked at the bottom of this hill, under the trolley track, all day long, no one even innit. If you guys don't wanna drive it, give me the keys. Ah'll plah deez roads." - William Weichler, fed up resident of hilly, icy SW PIttsburgh.

Having watched the video a few times to truly appreciate this Yinzer King's aura (the fuzzy-flap hat, the cig with angry finger point, camoflage, high-speed reflective sunglasses, goatee/beard, perfect generic coffee cup hold also with angry finger point) I started to second guess if it was even real.. if he was too good to be true.. but you have to believe 'Dr. Farts, Sex Dwarf' here. If he says this guy is real, he's real. 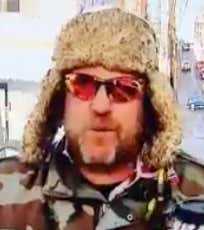 Mr. Weichler, I hope whoever's in charge of #20 Salt Truck & Plow sees your interview, knows you mean business and gets their ass, and their plow truck, in gear. Godspeed.