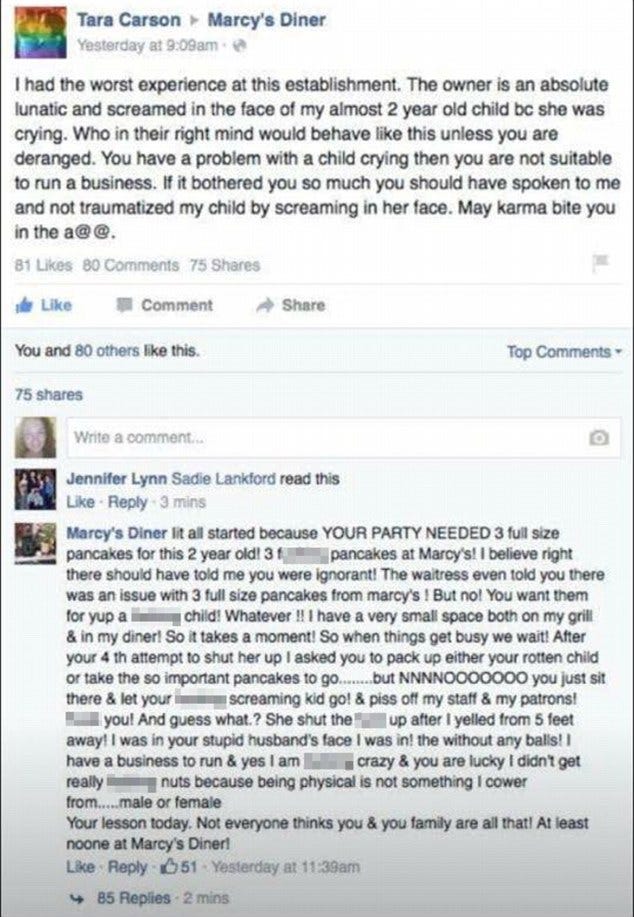 Daily Mail – A Maine diner owner under fire for yelling at some customers’ young daughter has hit back at her critics–and the mom and dad–who’ve helped put her restaurant in the national spotlight this week. Darla Neugebauer on Wednesday again refused to apologize for yelling at the 21-month-old daughter of Tara Carson, a New York City marketing professional who posted about her side of the story in a Washingtonpost.com rebuttal that same day. ‘Who knew calling out s****y parenting made you a bully,’ Neugebauer posted to her diner’s Facebook on Wednesday. ‘MY DINER….MY RULES The only thing I am sorry for is that child has to grow up with such terrible parents.’just feel sorry the child has such terrible parents! According to the Portland Press Herald, the local health authorities have also inserted themselves into the debate about how Neugebauer handled Carson’s noisy baby on Saturday morning. A post that had reportedly shown up on Facebook in which the diner owner threatened to spit in patrons’ food spurred the City of Portland investigation. City officials, meanwhile, acknowledged that the threats and accusations originated from out of state, and would take them with a grain of salt considering the diner’s spotless health inspection record. Carson on Wednesday also spoke out on the incident with Neugebauer. Carson was yelled at by the owner and claims: ‘I’ll never forget the look of fear on my baby’s face.’ The pair have been locked in a public row since Neugebauer told Carson’s two-year-old daughter to ‘shut the hell up’ after the girl had been crying for ’40 minutes’.

Welp I guess this is the life I have in front of me. So now I’m at a crossroads. Am I team parents or team diner owner here?

I mean first thing’s first you get in my 2 year old’s face and you’re getting Tombstoned. Straight up no matter what the circumstances are. But lets really dig into the situation here:

This dispute was over a 2 year old screaming for FORTY minutes because she wanted 3 pancakes. THREE! Three pancakes is a LOT of fucking food. Out of all the foods where your eyes are bigger than your stomach, pancakes takes the crown. You see a stack of like 7 p’cakes and you’re ready to devour all of them. You’re cutting out slivers that are 4, 5 pancakes deep. Eating every layer at a time. And you get about 1/12th of the way through and you’re full and its because you basically have like an entire 4 loaves of bread in your stomach. So the thought that a 2 year old would need 3 pancakes is flat out laughable. That kid is a cocky prick if he thinks he can eat 3 pancakes. Bare minimum we need to have a rule where its 1 pancake per year on this earth. And I’m even talking about silver dollar pancakes. Just get out of my face with that preposterous order.

Secondly, the kid screaming for 40 minutes seems outrageous too. I dont know how this works yet. I’m sure when you’re new parents and you first venture out to restaurants and your kid is noisy you’re very polite and take them outside and make sure they dont disturb anybody. And then I’m guessing by the 5,000th time you have to get up from the table to do that, you tune it out and just say “Fuck everyone in this restaurant, I’m sitting here and eating my food.” So I cant quite say these parents are assholes at this point. I know I dont give a SHIT about strangers, so maybe I’ll be like “Fuck your ears. You get up and go outside.” Who knows? Remains to be seen.

All I know is A) three pancakes for a 2 year old is absurd and B) Mae Young getting in the face of a toddler and screaming at them is equally absurd. All around assholes in this story.

PS – That part about Tombstoning is a total lie. You see that broad? That was one badass bitch. She was ready to choke out a 2 year old. She said shes gotten physical before. No way she couldnt beat my ass.