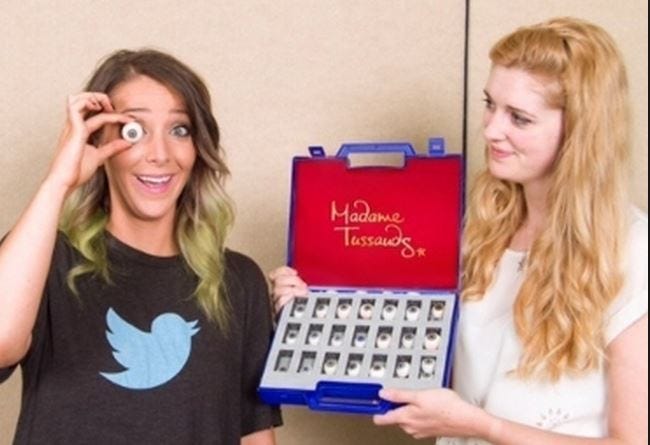 People’s Magazine – Next up: How to trick people into thinking your wax figure is good-looking? Madame Tussauds announced the first Internet sensation chosen to be a part of their iconic New York City attraction: Jenna Marbles. Marbles, whose real name is Jenna Mourey, has a whopping 1.8 billion views and over 15 million subscribers on her comedic YouTube channel. She also hosts a countdown on SiriusXM and a podcast with her boyfriend Julien Solomita.

“I can’t believe I’m getting my own figure,” she said in a press release. “Watching the studio’s team work so diligently to get every last detail of me was an interesting experience, and I can’t wait to see the finished result!”

Congrats to Jenna Marbles! A wax figure at Madame Tussauds is some big time stuff. No other way to look at it. She’s a fucking mega star. And nobody’s happier for her than me. I know people think I’m jealous or mad because I created her and she’d be working in a tanning salon without me and she never really thanked me, and all her most famous videos were when she was a Barstool employee, but that couldn’t be further from the truth.  The fact of the matter is I didn’t want a wax stature anyway.  I mean I don’t have time for that shit in my schedule. I’ve got like 6 spikeball games lined up vs. teenagers tomorrow and then after that I’m picking dead lobsters out of the ocean. Like I said I don’t have time for that petty wax statue shit. So don’t worry about your boy Davey Pageviews. I’m doing just fine.

PS – On the bright side at least Marbles is wearing a Twitter tshirt.  Let’s get all those 13 year old girls who worship her on Twitter.   Pump that stock through the fucking roof.   All will be forgiven.