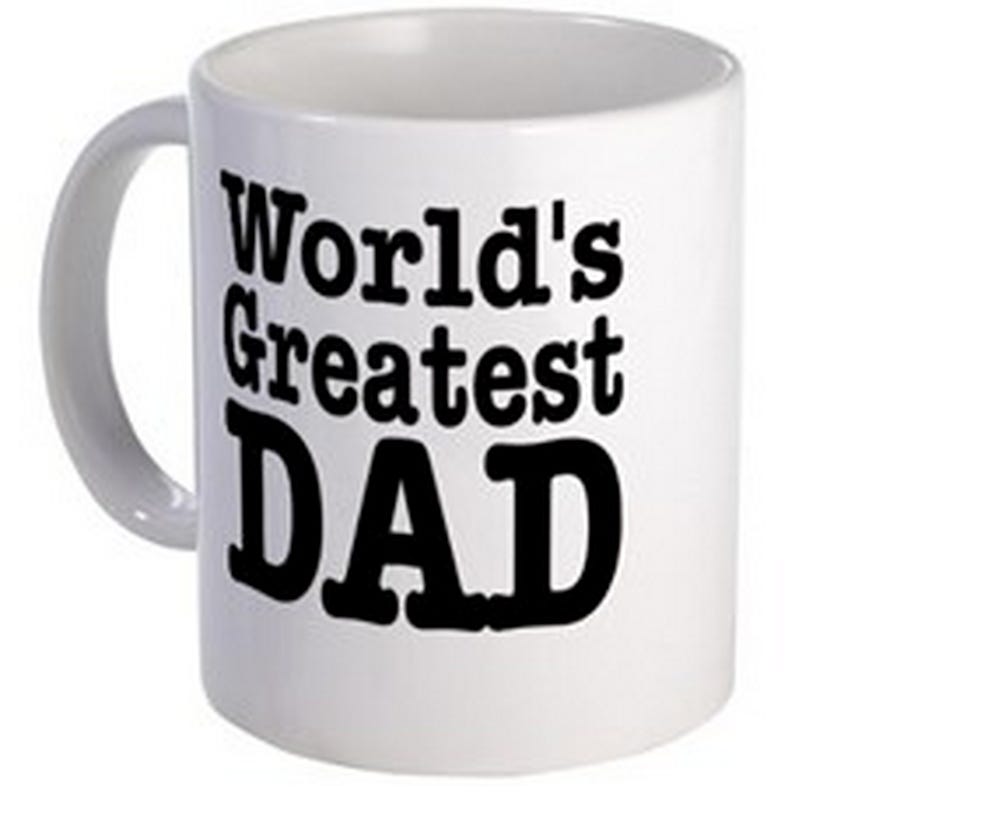 Look we’re an internet company. We’re cool. We’re hip. We’re on the cutting edge off all things. We’re technologically advanced. So that means we should be socially advanced too. So I’m expecting at least 90 days off when my kid arrives. I mean shit, Pres just took off 90 days for no reason. 90 day vacation to go find lobsters he planted in the ocean. I should get at least that many days to take care of another human life. As the official head of the Barstool Blogger Union this is my first order of business. Its 2015. Google gives 3 months. Facebook gives fucking 17 weeks. Bank of America 12. Hey Pageviews think about all the publicity you’ll get for giving like 20 weeks paternity leave. Beat Zuckerberg at his own game. There will articles written about you in the Wall Street Journal. Features in the New York Times: “Meet The Softer Side Of Pageviews: The Mogul Who Gives 20 Weeks Paternity Leave.” That will cancel out YEARS of Size 6 Skinny Jeans negativity. Jezebel won’t know what to do with themselves if Dave Portnoy is the single most progressive business owner on the planet when it comes to Paternity Leave. Think about it. That Next Level Brain of yours should already be ahead of me on this one. We can also sell Barstool Onesies. Get into the newborn t shirt game. The way I see it, this kid is gonna make you so much money I deserve a raise and a few months off.

But yea, your boy KFC is gonna be a dad come this winter. Baby Girl Clancy arriving around the holidays. Kinda funny when you’re at the age when you tell people you’re gonna have a kid and their reaction isnt “Oh FUCK.” When you do it on purpose the reaction is much different. Much more positive. Although these were my two favorite responses: 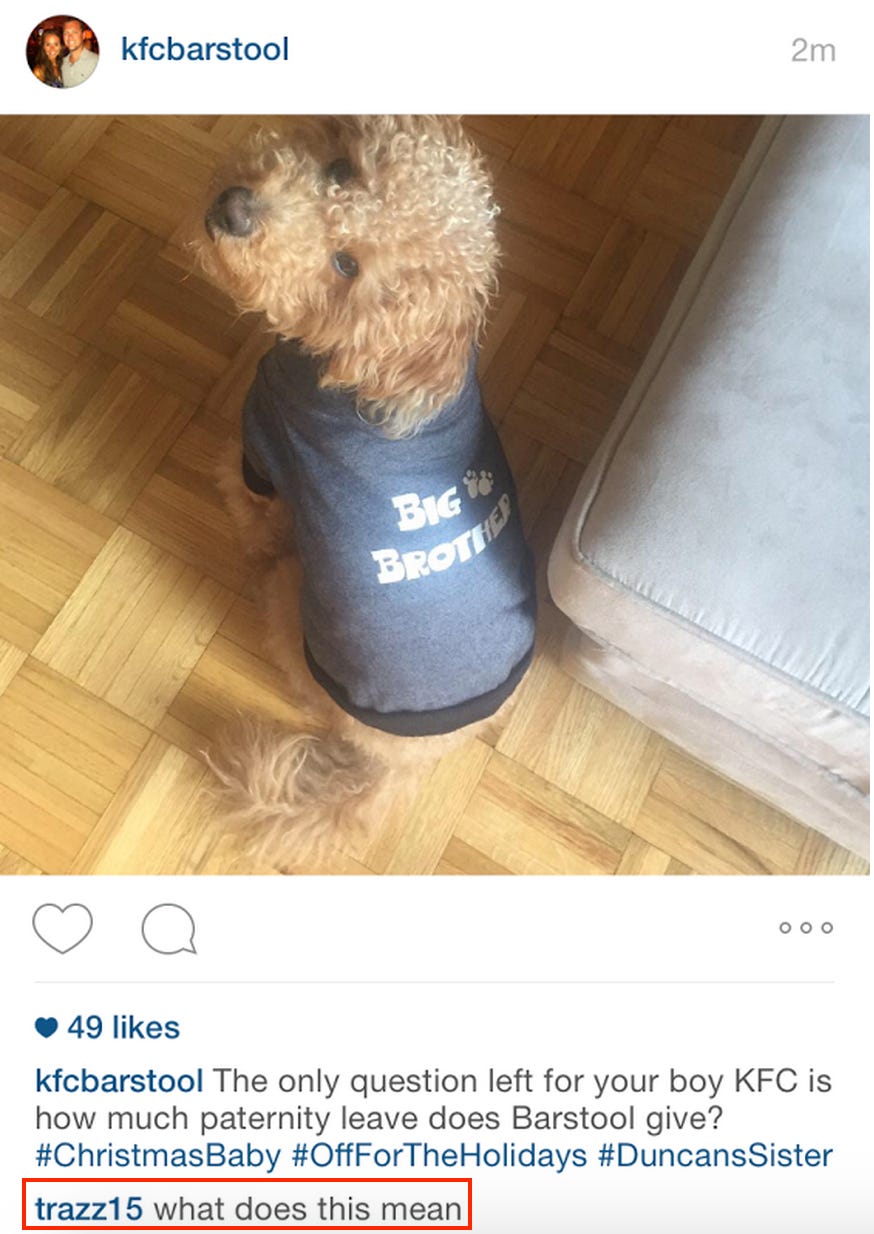 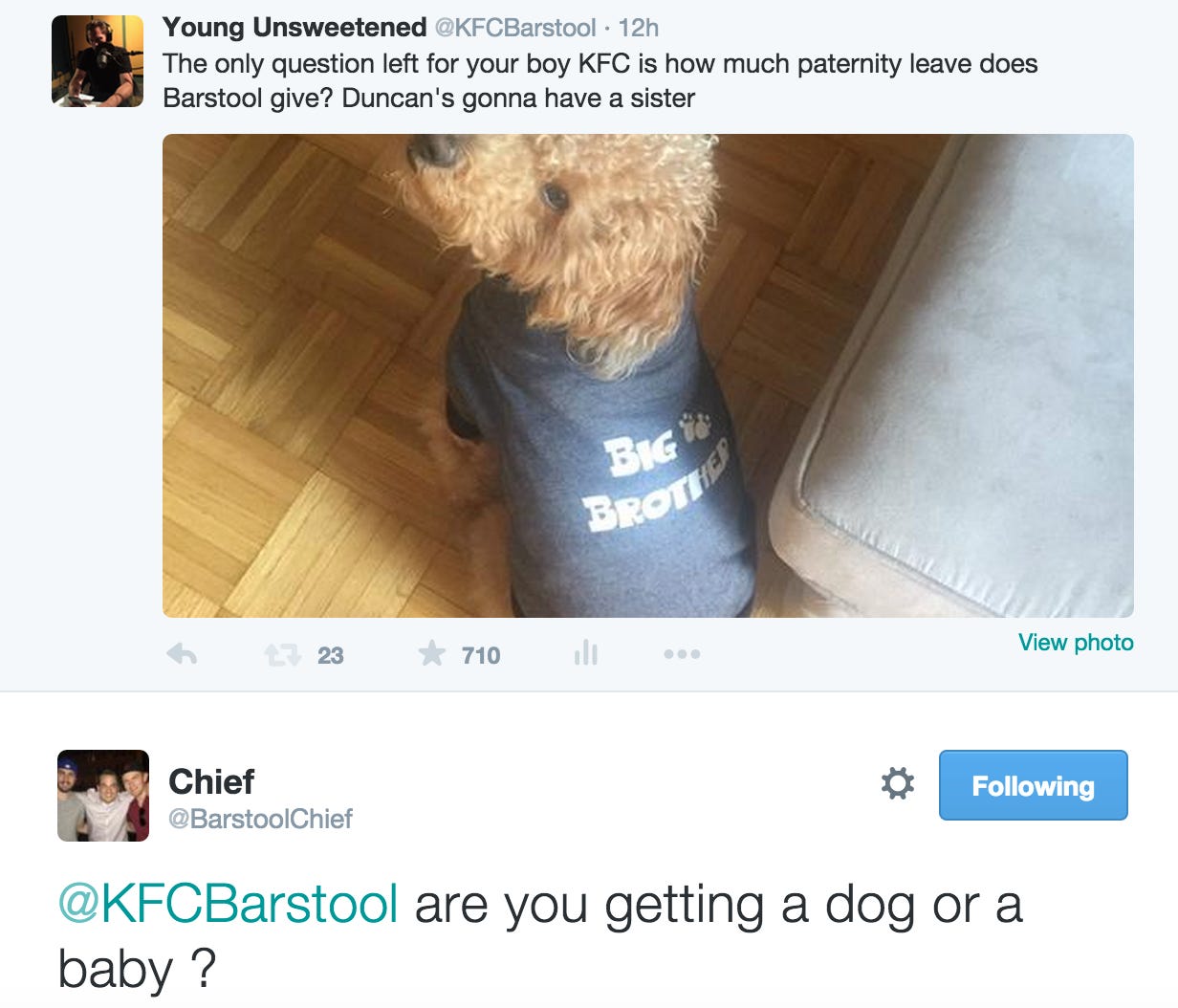 It was either pure confusion – like literally impossible for people to fathom the idea that bloggers are real humans that live real lives. Or people thought it was a dog announcement and I was asking for Paternity Leave for a new puppy. Either way I got some laugh out loud reactions.

Yea, of course you knew it was gonna be a daughter. I knew it, she knew it, God knew it. I know there’s been a million blogs and podcasts and Rundowns where I’ve joked about how having a daughter is every man’s worst fear, but the reality of the matter is when you go down this road your worst fear is something going wrong with the baby or the mother of your child and as long as they are both healthy and happy you really dont care at all. Plus little boys are assholes as soon as they pop out. A girl wont be a problem for the next like 14 years so until then I think I’m good. I’ll be like 45 years old. Everything in life will suck at that point no matter what, so whats another thing to worry about? I better be long gone from this joint by the time thats happening so whatever I’m all good.

Thats why I got that shoulder surgery and back surgery in the past like 4 months. Needed to get all my shit taken care of before I’m the one taking care of someone else. So, yea, first rapper to produce a hit record and a kid all in one year. Just kidding rappers have kids like every thirty seconds. But I am probably the first white blogger rapper to produce a knock out diss track and a baby in the same year so put me down in the record books. Just let it sink in that the entire time I was making that song as Young Unsweetened/White Zinfandel I already knew I was gonna be a dad. Every rundown, Mailtime, KFC Radio for months it was always in the back of my head. Wacky stuff.

Saw some people chirping like “This is the end of KFC!” FOH. You know how much a kid cost these days? Legit, kids cost like $25 million to raise. So if anything its just gonna be more podcasts to try to make as much money as I can to keep this thing alive. Shit, I might name this girl Naturebox Clancy just to pay for college. People said it was over for me when I got engaged and people said it was over once I was officially married and every time I always prove them wrong and I’m still here churning out content just like I used to. I’m aging along with the my fanbase who started reading with me in like 2009. And while I’ll definitely be keeping my daughter’s life private, the amount of material on being an absolutely terrified, clueless, stumbling, bumbling father will be absolutely endless. I promise not to be one of those “You just don’t get it. You don’t have kids of your own” people. I’m gonna be a straight shooter about fatherhood and I think its going to be an entire new, fresh chapter that has never been seen before on Barstool.

Now this last part, I was on the fence about. I had 2 different things in mind. The first thought was that I was going to ask you guys – specifically the commenters – to please be respectful of everything thats about to go down for me and my family. My other thought was that by saying something like that, it only entices you ever more to be even bigger assholes because its like a kid doing the exact opposite of what their parents tell them to do (Hey! Look at that! I already know the tricks of the trade!) and that I should just stay quiet. I’ve decided to go with Option number 1. Putting my faith in Stoolies on this one. I know there are gonna be a lot of commenters and twitter followers that hate my guts and are gonna say horrible mean cruel shit no matter what. I know there are gonna be cool people who say congrats and just laugh along with me as I butt fumble my way through this whole process. But I’m just asking for an ounce of class on this one. If you want to make fun of me and bust my balls about being an old dad now and shit like that, go ahead. But I’m truly, genuinely asking you guys, man to man, or man to woman if you’re one of those female Stoolies, please leave my Baby Mama and my daughter alone. There are about 500 billion other things to worry about without her having to read mean blog comments and stuff. Please dont make me regret this last paragraph. I’m putting a lot of faith in you guys.

Alright, enough with the mushy stuff. We’ll be recording a KFC Radio today and a Rundown and there will be a lot more laughs and shit like that about the First Father of Barstool.