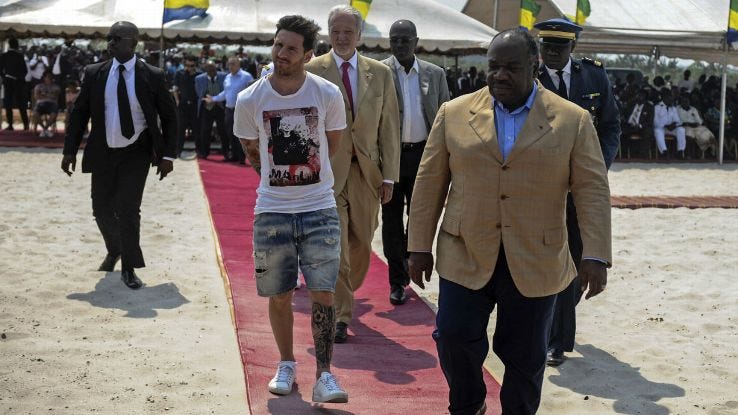 ESPN FC – Gabon’s political opposition have accused Lionel Messi of showing a “lack of respect for standards and principles” after the Barcelona star met the African nation’s president wearing denim shorts and a T-shirt.

A statement from the Union du Peuple Gabonais (UPG) party read: “The messiah of football arrived in Gabon like he were going to a zoo: dirty, unshaven and his hands in his pockets, looking for peanuts to throw to them!

“When you’re called Lionel Messi and you’re a multi-billionaire, you don’t have the right to present yourself to officials of a republic, even a banana one, with your hands in the pockets of a ripped, tattered pair of shorts.

“Gabon isn’t a zoo. We don’t know what the Argentine came to Gabon for, but we at least have the right to denounce his negligence and his lack of respect for standards and principles. We are uneasy with Messi’s attitude and his attire. Only for these reasons, linked to respect for the host country, do we condemn the footballer’s indelicateness, to say the least!”

First and foremost, congratulations to everyone. We all learned of a new country today and are now much more worldly and cultured because of it. Gabon. No fucking chance is that a real country but I’ll go with it anyway.

So yeah, Lionel Messi is over in Africa assumingly doing some sort of charity work, and on the first day he managed to piss off an entire African nation. And for what? For wearing a kick ass pair of jorts? Have just a little fashion sense one time for me, Gabon. And hey, losers. In case you forgot, you’re in the middle of goddamn Africa in the middle of goddamn July. It’s going to be hot as tits outside. So sorry if the Messiah didn’t realize his charity work was gonna turn into a black tie event and he’d have to sweat his dick off to meet the president of some banana republic. Take a look at those jorts, too. Those aren’t your dad’s Levi’s that Messi is strutting around in. Those are some hot ass jorts. If anything, he’s the best dressed in this picture. I may not know a ton about fashion and I try my best to not pretend like I do. But if there’s one thing that I know for sure, it’s that jorts will never in a million years go out of style. It’s a classic look for a classic man. So how about you show a little respect, Gabon? One swift kick of Messi’s left foot can wipe you bozos clean off the map.

Also, I really think Messi could benefit from a trip to Milton’s once in his life. 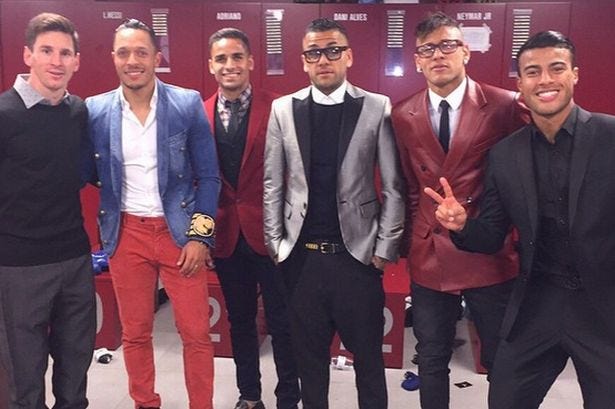