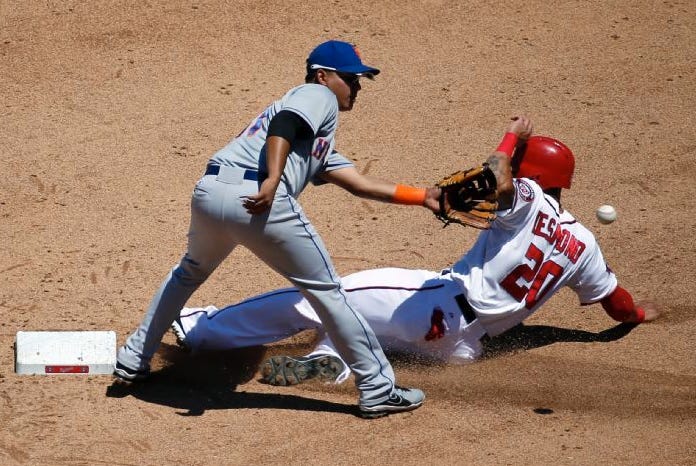 Desmond has a good game after my blog on him

The Nationals finished off their 3 game series with the New York Mets by winning twice and extending their lead to 3 games in the NL East. There’s a lot of baseball left but one has to feel pretty great about the Nats position – they are clearly the superior team on paper to the Mets and they showed their skill on the field this series.

The game one matchup pitted Mets ace Matt Harvey against Gio Gonzalez and Gio rose to the occasion to hurl a quality start and win his 7th game. Harvey struggled mightily in the beginning and appeared to be down-right frightened of Bryce Harper (despite Harper failing to knock a base hit against him in 13 at bats) by walking him twice. In fact, Harvey surrendered 4 total walks and now has 13 walks to 16 ks in July – not very ace-like. Desmond homered in this one to kick off what was really his first good series in some time. The Nationals kept the game close in game 2 thanks to some excellent starting pitching by rookie standout Joe Ross (6.1IP, 2 ER) and a 2 run bomb by Wilson Ramos but imploded in the top of the 9th and finally lost 7-2.

Game 3 was one of the more important games of the entire season. A loss and Washington is only 1 up on the Mets but a win and the Nationals win the series, prove their bats can handle the Mets’ arms, and extend their division lead to a comfortable but not necessarily cozy 3 games.

Zimmermann ran into some trouble in the 4th but it was smooth sailing aside from some two-out trouble that gifted the Mets 3 runs. One of the Mets’ other ‘aces’ ran into some control trouble during this game and threw just 5 innings while walking 5 but avoided any serious damage by allowing just one run on Michael Taylor’s 4th inning single.

The Nats showed why they should be the favorites to win the World Series with a resilient 8th inning to come from behind. This team was down 2 with their 6-7-8 batters up. Ramos struck out but then Desmond, who is responding well to my blog bashing him, drew his 2nd walk of the game (his first multi-walk game since May; he also had 2 hits), Matt den Dekker singled and advanced Desmond to second. Tyler Moore made the 2nd out of the inning but the fun was just beginning: rookie standout Michael Taylor induced a wild pitch which advanced Desmond and den Dekker to 2nd and 3rd, worked the count full, and then singled to score both baserunners and knock in his MLB record 35th batter before developing the capacity to grow facial hair. Danny Espinosa, who has shown A+ ability to grow facial hair, knocked in the leading run on a liner to left, Bryce Harper was intentionally walked because the Mets know not to mess with him, then Dan Uggla ruined it like he so often does.

The only negative from the Nats’ 51st victory of the season was Yunel Escobar and his 4th in NL .321 average was murdered on this Syndergaard pitch:

The X-Rays came back negative but that was to be expected and he’ll take an MRI soon which would reveal whether anything is wrong with his tendons and ligaments. Fingers crossed that he’s fine because the Nats are just now starting to get their injured stars out on Minor League rehab assignments and Escobar has been an incredibly valuable asset for the team this year. The silver lining if Escobar does need a DL stint is that everyone’s favorite prospect, Trea Turner, may be the man to be called up. Also, Uggla really fucking sucks. He has one hit since June and is really good at striking out and grounding into double plays. Not the guy we want being the first bat off the bench.

All in all, a very encouraging series for DC as they extend their division lead to 3 games and prove they can handle All Star caliber pitchers in Harvey and Syndergaard. Throw in the fact that the Nationals are actually more likely to make a move at the deadline than the cash-strapped Mets and it’s pretty easy to be confident that the Nats will win the division.