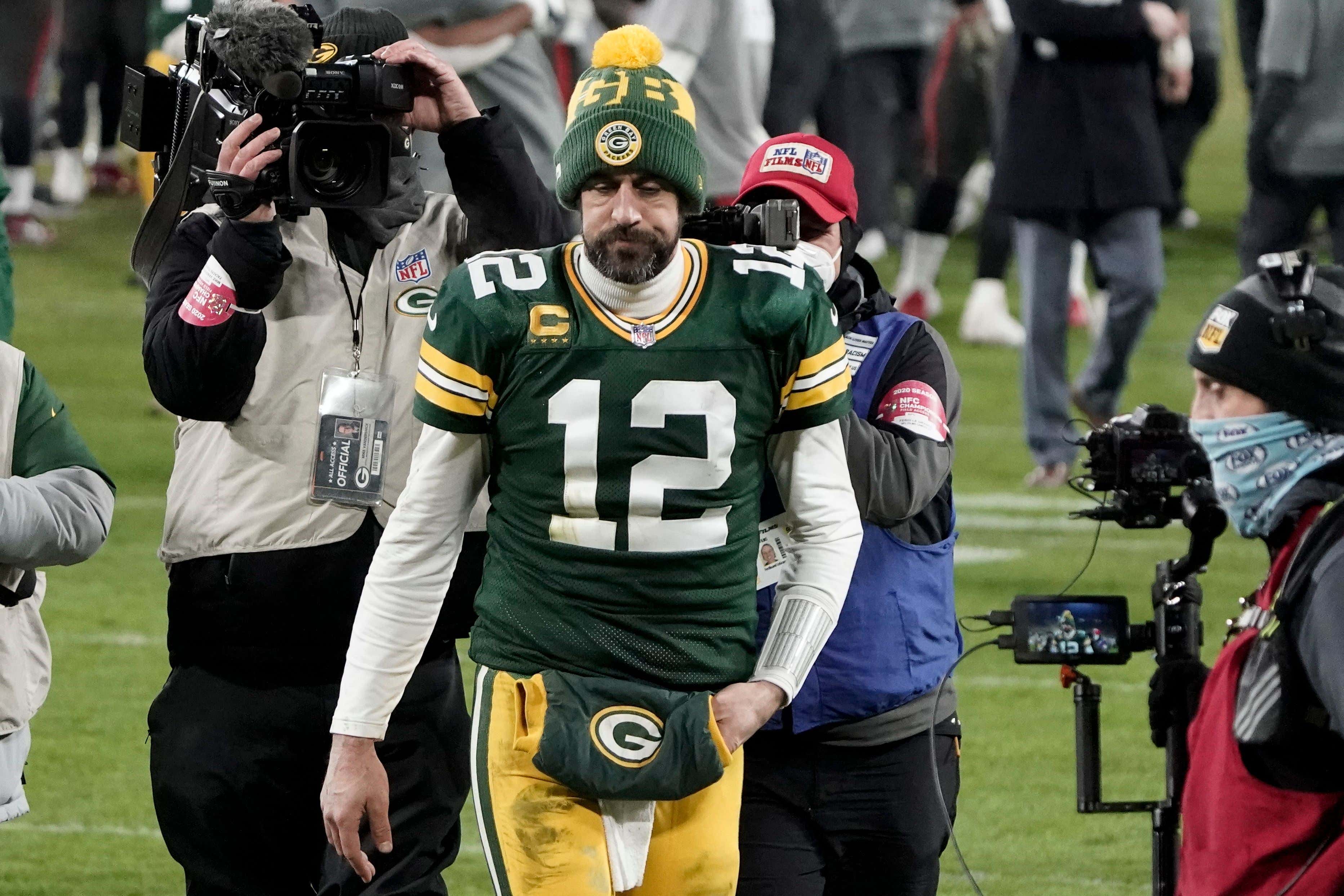 In case you missed it or my tears, after the NFC Championship game on Sunday, Aaron Rodgers said the following:

"[There are] a lot of guys' futures that are uncertain, myself included. That's what's sad about it most… getting this far. Obviously there's going to be an end to it at some point, whether we make it past this one or not. Just the uncertainties, (it) is tough, and the finality of it." (credit NFL)

Did he say he was leaving? That it was time to move on from the only team he's ever known? No. But ever since the Packers made the massive mistake of moving up in the first round to draft a quarterback instead of getting him the receiver he desperately needed, his future in Green Bay has been one giant question mark.

"My sincere desire to start and finish with the organization… may not be a reality at this point. And as much as I understand the organization's future outlook, and I respect that, at the same time, I still believe in myself and have a strong desire to play into my 40s, I'm just not sure how that all works together at this point."

In fact, the exact situation he's currently in was already been presented to him and his answer was pretty damn clear.

KyleBrandt: "If you're just you and you can stay healthy and the team either has to choose 'we're going to move on from Aaron Rodgers' which sounds nuts, or 'we're just not going to play our 1st-round draft pick'… how does this end?"

AR: "I think probably the first. The former. I think that's probably what happens, based on just the circumstances around everything. Just look at the facts: they traded up, they drafted him - I would say they like him, they want to play him."

He believed, given the situation he's in now, the team would move on from him. Naturally, when he dropped a "there are lot of guys' futures that are uncertain, myself included" just moments after losing the NFC Championship, my mind immediately went to that interview. And to the quarterback he replaced who played his last game as a Packer at Lambeau, in the NFC Championship game, also during his 16th season. I wish I had known then that game would be the last time I saw #4 in green and gold, but I didn't. And because I was swept away by the season, I also didn't think that might be the case with 12 this year. So yeah, those words struck a cord.

I don't think people are used to hearing the truth from athletes, so when they hear the truth, it's so, like, surprising at times. …That's all I said after the game. It was like, obviously, I'm 15 minutes from crying in the locker room with some of my teammates, I come and sit down to do this interview and they ask me questions, I give real answers…

To me, a reality - not a certainty or an absolute - is that my future is not in my hands."

If he gave us the truth, then the truth is his future, at least in that moment, was uncertain and he wasn't sure if he was going to make it past this one or not. And if that's true, why wouldn't the organization have already let him know he's their guy for 2021? Not only did he sign a four-year deal back in 2018, but he's the future league MVP who just took your team to the NFC Championship game for the second year in a row. Why would there be any uncertainty about his next season at that point? Lock that shit up!

"Obviously, after the season that I had, and potentially winning MVP and we obviously made another good run, I don't think that there's any reason why I wouldn't be back."

Reason? Who said anything about reason? Of course there's no reason for the team to not bring Rodgers back. Just like there was no reason for the organization to use a 1st and 4th round pick to move up, draft his replacement, and create this drama to begin with. This has never been a conversation about logic and reasoning.

"There's no way in heck Aaron is not gonna be on the Packers," Murphy said Monday during an appearance on WNFL in Green Bay. "He's going to be the MVP of the league, might have had his best year ever, he's our unquestioned leader, and we're not idiots."