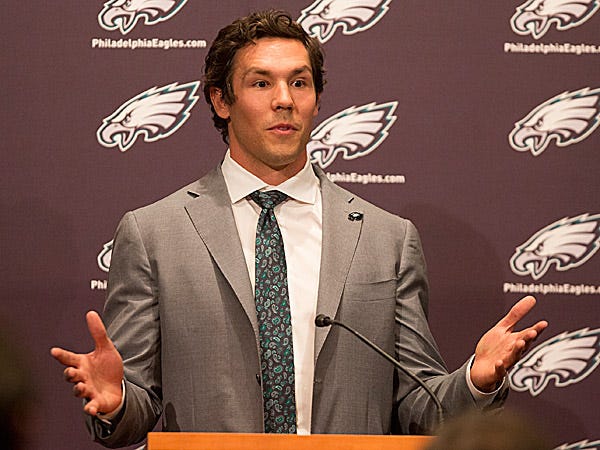 NFL - The Philadelphia Eagles took a chance on Sam Bradford by trading for him and choosing to pay him $12.985 million this season. But there’s no telling where he’ll play in 2016. NFL Media Insider Ian Rapoport reported on NFL Network’s NFL Total Access on Monday that Bradford plans to play out the final year of his contract, according to a source informed of his thinking. Bradford is essentially betting on himself by not signing an extension now. If he stays healthy and plays well, he could maximize dollars later.

Nice. This is an absolute win for both sides, but especially for the Eagles. Bradford gets to test out the waters in Chip Kelly’s offense and if it works out, great. If not, then he’ll surely get a shot somewhere else. It’s a GREAT move for the Birds as they don’t have to worry about having Sammy on the hook if his ACL’s explode. If Bradford shines and the Eagles have to pay the man his money, even better. I don’t think anyone has an issue with paying a franchise QB some straight cash homie. So, like I said, Bradford playing out his final year of his ABSURD rookie contract is a win for both sides.

In all seriousness Bradford probably wanted an extension and Chip suffocated him into submission in between his massive nuts. Follow the man to freedom, Sam.