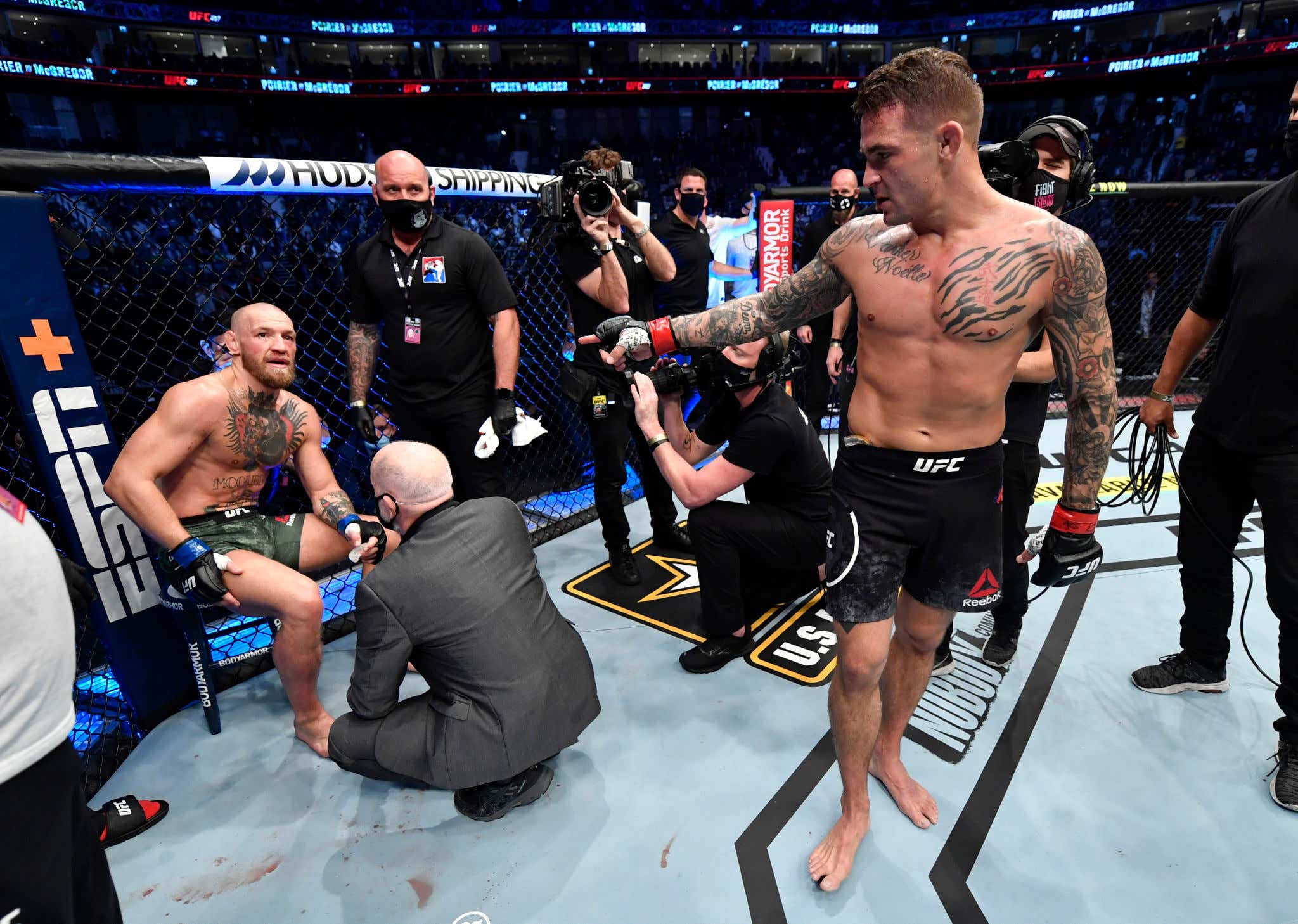 Well - that sucked. No two ways about it.

Truthfully, I was so busy/anxious on Fight Island all week that I didn't even consider the possibility of McGregor losing that fight until he was lying on his back, lookin up at the lights, gettin meme'd unknowingly, but hey - that's the fight game for ya. Unpredictable shit happens all the time.

We saw it in the co-main event, when former Bellator Champion Michael Chandler (+145 ML, +650 via KO/TKO) knocked out Dan Hooker in his UFC debut….

….and obviously, we saw it in the main event, when Dustin Poirier (+240 ML, +450 via KO/TKO) chopped down the lead leg of Conor McGregor with some vicious calf kicks, backed him up against the cage, and put him away with strikes in the second round - RIGHT in front of my face.

It was a perfectly executed gameplan by Poirier - laid out by the brilliant American Top Team coach Mike Brown - to attack the front leg of McGregor fast and early, and those kicks were even something Dan Hardy focused on heavily in The War Room during the lead-up to this fight:

Conor seemed to have a hard time checking those kicks from the start (or even just getting out of the way of them - did they not expect them?), and by the time he started catching a few of 'em towards the end of the fight, it was too late - the leg was already compromised.

Watching it back, you could see him slow down noticeably in the second, and start missing shots by wider and wider margins (which is obviously unlike Conor), and from there, Poirier was able to put McGregor's up against the cage and unleash a SICKENING flurry of blows that dropped and TKO'd the former two-weight world champion for the first time in his mixed martial arts career. It happened sooooo fast.

For what it's worth, I thought McGregor looked pretty damn good in the first round of the fight (aside from not checking those kicks). He was able to spring right back up after being taken down, controlled the clinch well, hit a few of those now-signature shoulder strikes, and landed much heavier shots overall - Dustin even admitted to getting rocked with a left hand to the media later on - but that don't mean much if you don't come away with the victory.

Conor McGregor's post-fight presser was very reminiscent of the one he put on right after his first loss in the UFC, to Nate Diaz, where he basically gave young fighters a masterclass on how to deal with defeat with grace.

There were zero excuses made - just tons of praise and respect for Poirier and the performance he put on….

It certainly seemed like he wanted to get back into the octagon rather soon in his interview with Jon Anik post-fight….

….but obviously, the big question is who the opponent would be if that holds true.

Do you run this fight back right away, being Poirier/McGregor are now one-a-piece? Do you instead opt for the OTHER McGregor trilogy fight - the one with Nate Diaz? What about Tony Ferguson? He's coming off a loss, and there's a little storyline built into that one, right? Maybe Dan Hooker - another guy who lost in devastating fashion tonight? What about that supposed boxing match with Manny Pacquiao? That still happening?

LOLjk. I'm kidding about Jake Paul. Never in a billion years. What an insufferable douche he is, huh? I don't think Conor will ever even acknowledge him - media were told no questions about him last week for that very reason, I believe. Can't feed the trolls.

For my money tho, McGregor/Diaz III is the most appealing fight you could make for The Notorious right now. Everyone loved the first couple fights (and the whole build), and the time has never been better to book the third. Diaz hasn't competed since November of 2019 (vs Masvidal at MSG) and what better fight to bring him back in than the trilogy with Conor?

You wanna see flashes of the old McGregor? The not-so-respectful McGregor? Put him in a room with ol' Nathan Diaz again. I'm sure the Stockton native will be glad to instigate some shit-talking…..and maybe even some bottle throwing:

If not Diaz, I certainly wouldn't mind them running this Poirier fight back immediately. There's obviously a lot of intrigue in Dustin from all over the world now, and in his post-fight presser, he said the trilogy with McGregor is already in his mind as one of the few fights that intrigues him at the moment.

Tony Ferguson would be my third man up, and probably who I think McGregor would have the easiest go against at this stage in his career - he's incredibly hittable, and I believe all of the WARS El Cucuy has been through are finally catching up to him as of late.

We're gonna have to wait and see, tho - it could be another friggin' year before Conor McGregor steps back into the octagon.

Mark my words tho: he will be back. We have NOT seen the last of McGregor.