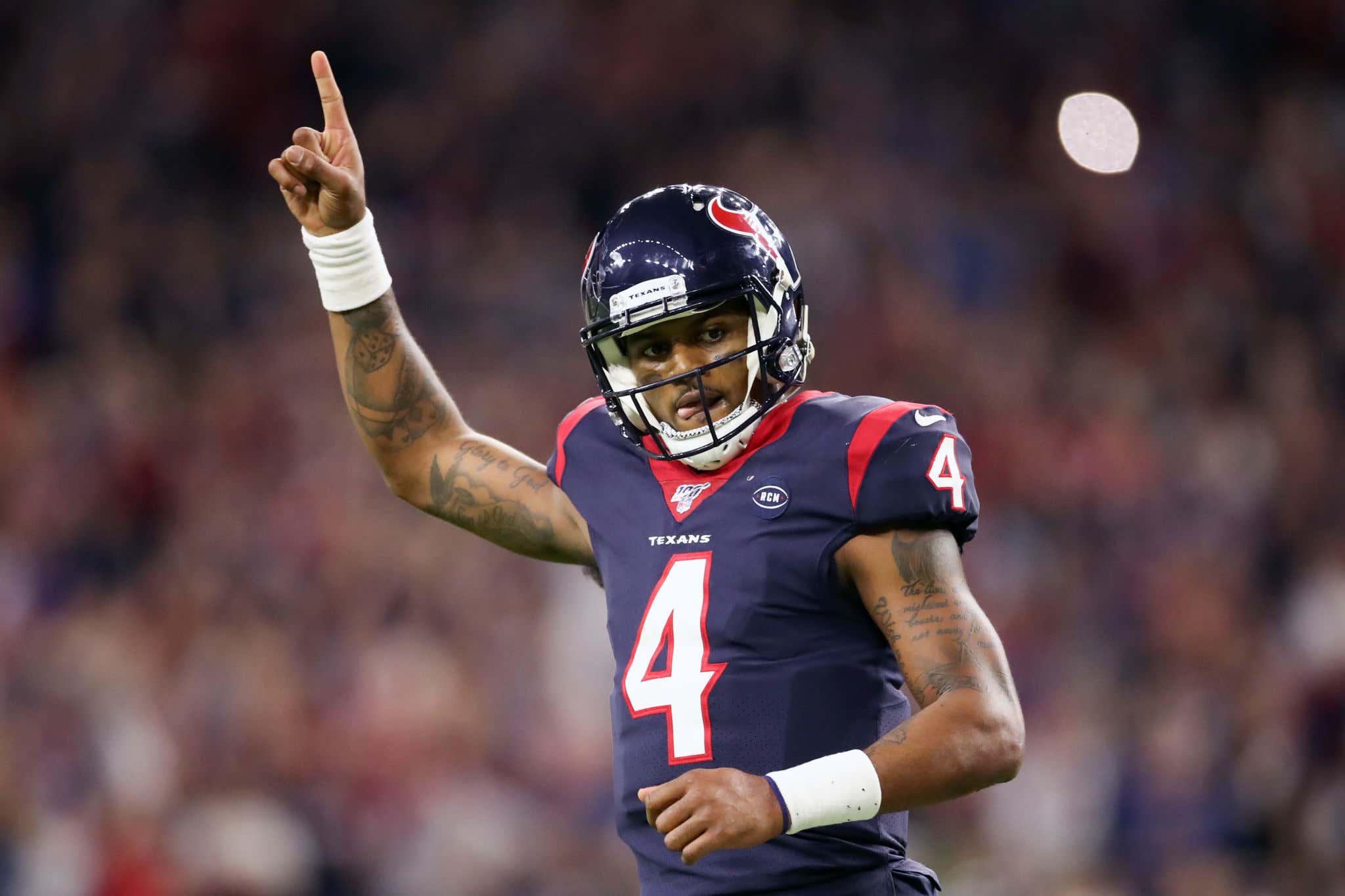 In a sports landscape that gets more crowded and noisier seemingly by the week, I get that it becomes increasingly necessary to heat up your takes. Even if means baking them in a kiln, then popping them in a microwave for three or four hours before finishing them off in the core of a nuclear reactor until they're done in the middle. And to do so often requires a ridiculous overuse of superlatives. Where you have to drop qualifying phrases like "one of" or "among the" and make sure every utterance you make is about THE best and THE worst. Not just lately, not just of the moment, but of all time. When you're looking for clicks and viewers, subtlety and nuance are the enemies that will destroy you.

Which brings us to Deshaun Watson. In know way is it a stretch to say his immediate future should be the biggest story line of the 2021 offseason. He is probably on the trading market (no one in Houston is confirming that). 25-year-old quarterbacks of his caliber become available maybe once a generation. Any bad team that gets him becomes instantly respectable and any average team with good coaching and a decent defense/supporting cast becomes a contender. Those are facts not in dispute.

But just the fact that he's the story of the offseason is enough to push otherwise stable people over the edge into full blown insanity. Skip to the 5:00 mark where Mike Greenberg says a deal involving Watson "will be the biggest deal in NFL history." Or don't. I'm not the boss of you.

Or, if you so choose, consider this report out of Houston:

Just so we're defining our terms, here's a brief history lesson for you children of the 90s. While you were busy feeding your Tamagotchis and Levar Burton was teaching you to read, the Cowboys were enjoying one of the NFL's great, if short-lived, dynasties. Which was built in large part by the Herschel Walker trade.

In 1989, Dallas rookie head coach Jimmy Johnson was almost halfway to a 1-15 season. While on a jog in October, the Pork Faced Satan (Notre Dame's name for him, not mine. I would take a bullet for Jimmy Johnson.) claimed he got the inspiration to flip his biggest bargaining chip. Later he found a willing partner in the Vikings, who within days were backing a Brink's truck filled with draft capital to Jimmuh's loading dock. In a complicated deal that also involved the Chargers, the Cowboys sent Minnesota Walker, two 3rds, a 5th and a 10th. In exchange they got four players, three 1sts, three 2nds, a 3rd and a 6th, spread out over the subsequent three drafts.

As a result, the Vikings went from 10-6 in 1989 to 6-10 in '90 and 8-8 in '91. In '92, the Cowboys won their first of three Super Bowls  in the next four years. They even had the draft capital to secure the No. 1 overall pick in the '91 draft, which they got from the dumbasses who were running the Patriots at the time for a handful of magic beans. They then used that one to add Russell Maryland.

And there's a case to be made that's not even the biggest trade in NFL history. You might give that one to Mike Ditka when he was with the Saints in 1999, when he got the fifth overall pick from from Washington so he could take Ricky Williams. Just as the rules were being changed so the passing game would be guaranteed to take over pro football, Dikta tried to build his team around a running back with a penchant for touch, inside running and smoking the Sticky Green Nasty. To do so, he sent Washington his entire draft. Specifically picks 12, 71, 107, 144, 179 and 218, and his 2nd and 3rd round picks in 2000.

The result? Ditka was fired after the season. Only the fact that the R-words were as mismanaged then as they've been ever since prevented them from building an empire on the ashes of Ditka's failure.

Anyone who thinks that Watson, good as he is, will command anything close to these hauls is deranged. I know it only takes one desperate team to make it happen. But even the stupidest GM and the most naive, Lucky Spermer owner have to be able to look at history, don't they? Teams that pay this high a price to get one guy end up with a great player and nothing with which to build around him. Careers are lost on irresponsible gambles like this. A trade for Watson will be big. Huge, even. But any notion of "the biggest trade in history" or anything approaching the deals for Walker or Williams is the product of a delusional mind. Or someone desperate to get attention. Or, more likely, the Texans are putting this nonsense out there hoping to get a better return.

P.S. If Bill Belichick makes a deal like these for Watson, disregard everything I've just said. Please and thank you.