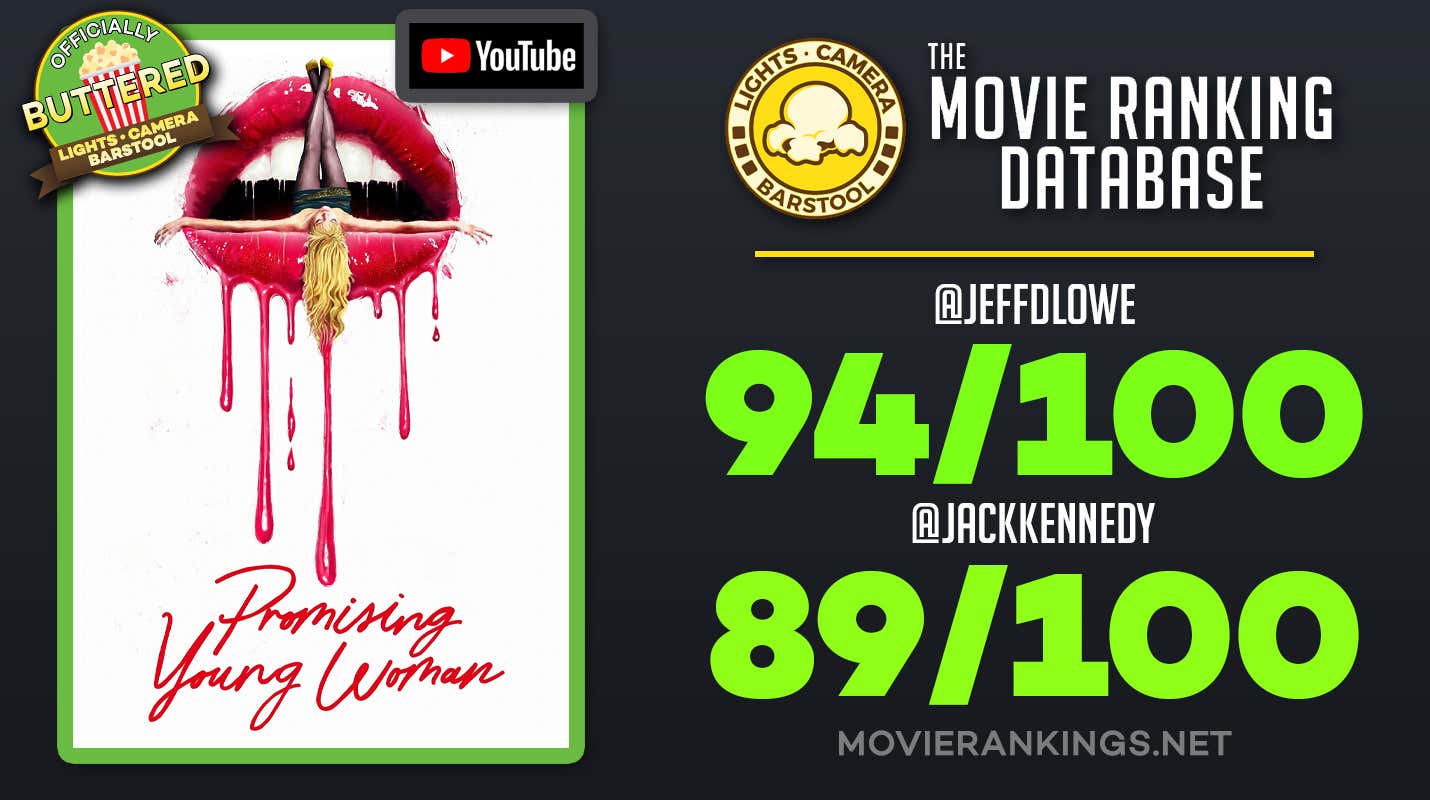 We reviewed this movie on our most recent episode…

…and went into good detail, but here is a quick written version of our thoughts. This is one insane movie!

Nothing in Cassie's life is what it appears to be -- she's wickedly smart, tantalizingly cunning, and she's living a secret double life by night. Now, an unexpected encounter is about to give Cassie a chance to right the wrongs from the past. (via Google)

JeffDLowe (94/100): One of the year's best movies, 'Promising Young Woman' has crazy shifts in tone and genre that work wonders as it takes you on an absolute thrill ride in what can best be described as a dark-comedy-crime-revenge-thriller. Then, to top things off, Carey Mulligan's performance in the lead role should land her at the top of the list for all major acting awards, including the Oscars.

Talking about 'Promising Young Woman' is difficult when it comes to avoiding spoilers because so many things happen in the movie that you just won't see coming. Part of what makes the movie work so well is the crafting of the story, it will truly leave most audience members with their jaws dropped to the floor. The emotion and experience of a movie are two of the most important things to me when I sit down and watch something. I will almost always put more weight into the experience I have with a movie, over everything else. It's a large reason why I truly loved 'Uncut Gems'. It was a good movie, but it also made me feel something when the credits rolled.

That's the exact same thing I can say about 'Promising Young Woman'. There are so many moments in this movie that will hit you with a slew of different emotions, that when the movie finally ends, it feels like you were on a thrill ride.

The script snaps, the movie looks fucking excellent, and the story is incredibly engaging, but it is hard to not call Carey Mulligan the best part of the movie. I can't say I have always been a huge fan of Mulligan's performances. There are a few movies of hers that I enjoy, but, fair or not, I always think of that shitty 'Wall Street' sequel. But 'Promising Young Woman' has completely shifted my thought process. She has to wear so many emotional hats in this movie, and seamlessly finds a way to portray this character in different ways along with the tonal shifts of the story. There is an impressive nuance to her performance and it lifts the movie to the fantastic heights it reaches.

There is no doubt that the story, premise, and how it all plays out might be a bit of a turn off for some people. It's a fucking insane ride, with twists and turns that can stand up to any release from the last few years. But my word this is a great example as to why I love movies. It's original, fresh, different, and a fucking dynamite experience. 'Promising Young Woman' is a movie you should rent and watch as soon as possible.

KenJac (89/100): I like this movie because it’s hard to nail it down into a particular genre. It’s equal parts revenge thriller, black comedy, social commentary, Drama, Romance. It’s got a little of everything. It’s also visually gorgeous, has very solid dialogue and I think a cool concept as far as it is a sort of bloodless revenge story.

From an acting standpoint, Mulligan is obviously the standout. Acting drunk is a lot harder than it looks, so props to that. But also props for being so menacing, like bone-chilling. And she hits the emotional marks too which we knew she could handle. I think Bo Burnham was good, but he was just playing Dr. Bo Burnham.

From an artistic standpoint, I think they nailed the vibe they were going for perfectly. Neon and gritty at night dulled matte colors during the day. There was a lot of great framing, everyone talked about the mary halo shot, but I think my favorite one was in the CMP scene. It’s a very wide shot of the entire couch. There is so much room but he is basically pushing her into the end of the couch and the end of the frame. It helps you feel the claustrophobia that she is feeling in that moment and that women in that position feel. The script was also great in that it really lacks subtlety in how the men talk and excuse their actions. They all follow the same script which is obviously with purpose and pays off big time.

On the technical end, I think there was some fat that could be trimmed. It’s weird because I felt like Cassandra's relationship with Ryan had time to be developed but still felt sort of rushed. And I think I just would have liked better performances from the people not named Carey Mulligan. That’s really the only place I have criticism. Other than that, I like how they twisted the tension and built the suspense up. Like I said before, making a bloodless thriller seems nearly impossible, but this has more suspense than some of the best I’ve ever seen and it has a killer ending to boot.

--
The movie is Officially Buttered, and easily one of the most intriguing releases of the 2020 schedule. You can head to Lights Camera Barstool right here to listen to our latest episode where we just went in-depth with reviewing this movie.