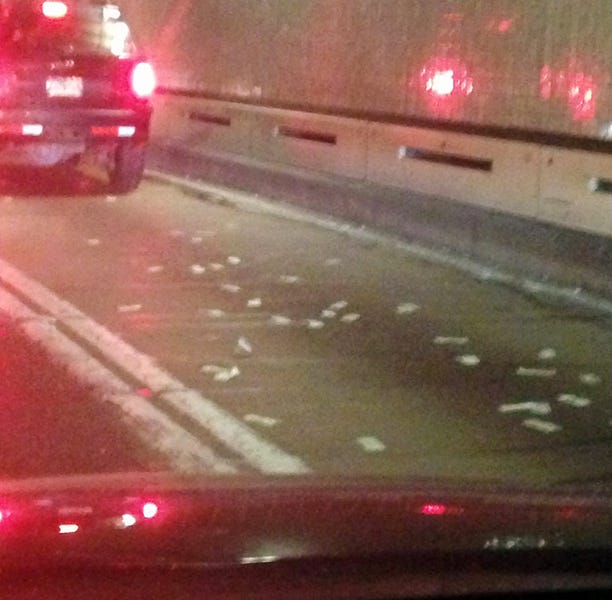 WaPo - Motorists who pocketed cash that fell from an armored truck in the Baltimore Harbor Tunnel this week have until 5 p.m. Saturday to return it without fear of facing charges, officials said. The money spilled Wednesday night from a Brink’s truck after the rear doors opened, Maryland Transportation Authority police said. Apparently, the money came tumbling out when “door security malfunctioned,” the police said. The southbound lanes of the tunnel were closed for about eight hours. About 35,000 vehicles a day use those lanes, which provide an important link in the highway system that connects major east coast cities.  Authorities said that some of the money is apparently still unaccounted for. This was so despite a thorough search and led to scrutiny of an array of relatively inconspicuous nooks, crannies and crevices. The amount still missing could not be released “due to the ongoing investigation,” the police said.

Why was I not in this tunnel last week? We see stories like this every so often, an armored car flies open, cash goes flying, motorists scramble like crackheads trying to scoop up the cash. And they always say the same thing- “better return the money or face charges”. HAH! Talk about a gold mine. It’s like being in one of those money machines where you’re trying to catch all the bills flying around. If you give back money when it’s scattered all over the road you are a Grade A, good for nothing jabroni of the highest order. It’s a free for all. And for it to happen in Baltimore? That’s like every Baltimorean’s wet dream. I’m pretty sure Banks didn’t blog it last week because he hasn’t stopped cumming from this story yet.

The only time I think I would have given anything back is when that spaceship exploded and pieces were falling from the heavens onto people’s lawns. I think you have to give the spaceship pieces back..but maybe you just keep a piece or two for yourself. I mean they don’t need all the pieces back anyway.

PS: If you ever find a briefcase with like 30k cash in it though, you obviously return it to the police. But if it just so happens when you found it there was only 20k in it, so be it. Guess someone came across it before you.