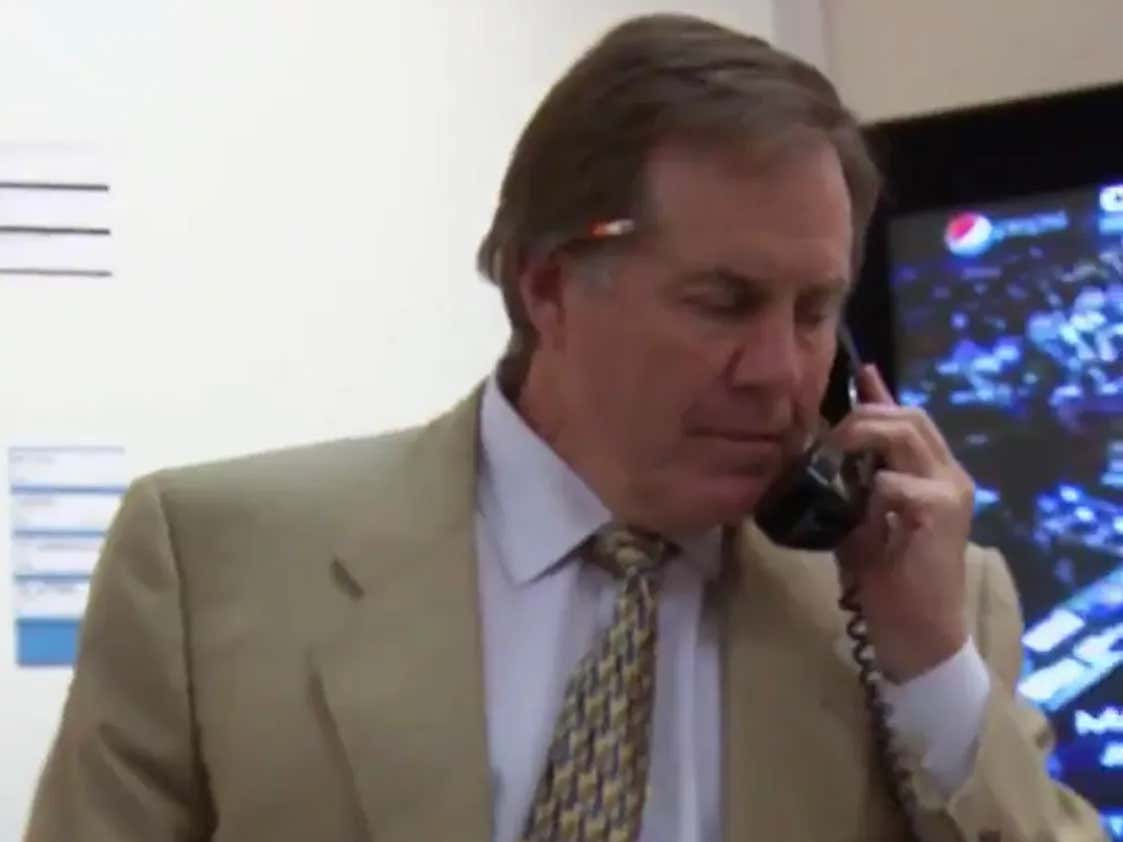 If there's been one steady, consistent drumbeat of criticism directed toward Bill Belichick the GM every offseason, even as the successes and the victories and the wins and the championships and the other synonyms have been piled into a mountain of triumphs, it's that he's not aggressive enough. That he's content to sit in his car while all the other Black Friday shoppers rush through the doors to fill their carriages and then go in later and go through the picked over, unwanted remainders left on the shelves. Then on draft day, he'll move down the board a lot more often then he'll stay put or move up. Opting to trade a buck for $1.05 in change any time he can.

While not entirely true, those are not the most unfair assessments of how he's traditionally done business and built his team. There have been years when he's been aggressive. If not by the ridiculous, irresponsible standards of, say, Dan Synder, at least by his standards.

The 2003 offseason comes to mind. That's the year he surprised everyone by signing Roosevelt Colvin almost immediately at the of the free agent market business day. He then landed Rodney Harrison, one of only two GMs in the league who showed much interest. He added Tyrone Poole, who went on to start all 16 games at right corner that season. And in the draft, sitting on the 14th pick thanks to the Drew Bledsoe deal the year before, he traded up one spot in order to guarantee he'd get DT Ty Warren. Granted, he did trade his own pick, 19th overall, to Baltimore for their 2nd rounder and their 1st the following year. But since that 2004 pick landed him Vince Wilfork, no one would have any reason to complain. Besides the two seasons that followed were the most successful back-to-back years in NFL history, with a combined 34-4 record and two championships.

The more commonly use example is 2007, when he famously traded for Randy Moss and the undervalued asset that was Wes Welker (100 catches in three seasons with Miami) and signed both Donte Stallworth and Adalius Thomas, who was rated the No. 1 available defensive player in free agency. In the draft, he stayed at No. 24 to take Brandon Meriweather with a pick he'd gotten in the trade of Deion Branch before flipping his own pick at 28 for package of that would get him Jerod Mayo with the 10th pick the following year.

I mention all this because I and you and the entire football world should expect this is going to be one of those types of offseasons for GM Bill. Thanks to something that has been his competition's greatest nemesis and his secret stealth weapon: The salary cap.

Source - Every December, the NFL gives the 32 teams an idea regarding the expected salary cap for the coming league year. This year, that didn’t happen.

It didn’t happen because the pandemic has caused revenue to crater, by dramatically reducing attendance at games. The NFL and NFL Players Association agreed in July that the cap for 2021 will go no lower than $175 million.

A league source with knowledge of the situation suggests that the salary cap could be in the range of $180 million.

At that amount, things could get very ugly for plenty of teams and players. … Plenty of players will be cut or not re-signed. …

The problem is that contracts always are negotiated with the understanding that the cap will keep going up by five to 10 percent. If it drops by roughly 15 percent this year, multiple teams will have major issues because they haven’t built their rosters with the possibility of a shrunken cap in mind.

I won't get too bogged down in numbers. But the source on the Patriots cap that has been the most consistently accurate on this stuff for years insists the suggestion of $180 million is just league spin. And he's standing by the $175 million figure. Which would give the Patriots almost $60 million as it stands:

That would, according to most of the experts in this arcane and complicated specialty, give GM Bill the fourth most cap space in the league, behind only Jacksonville, the Jets and Indy. Two of those teams are going into major rebuilds, with new coaches and presumably new quarterbacks. Among the rest of the league, even if that higher number of $180 million stands, at least half if not more will have to make drastic roster cuts just to get to the cap. And major contenders in 2020 like the Saints, Packers, Steelers and Chiefs will be forced to jettison precious cargo.

In short, it's going to be a buyer's market and the savviest trader in the business has as much to spend as anyone. Covid has kicked the NFL's financial ass in such a way that if you don't win this year, you likely won't have anything left in your account to help you win next year. And those who have managed their money right will be scooping up bargains.

It's like Baron Rothschild put it, when there's blood on the streets, that's the time to buy property. Even if the blood is your own. Or as that other great power broker George Bailey put it when there was a run on the bank, "Don't ya see? Potter isn't selling. Potter's buying. And you know why? Because we're panicking and he's not."

As bad as New England's 2020 was, its 2021 offseason is shaping up to be one of the most crucial, historic and best in recent memory. And every time the worse the news gets for the other 31 franchises, the better it gets for us.