UNILAD – A video is doing the rounds online at the moment that allegedly shows a man leading his blindfolded (well, towel over the eyes blindfolded) girlfriend through their home in order to provide her with a ‘birthday surprise’.

However, what she seems to be unaware of is that the surprise is actually all of her belongings, packed up and ready to leave along with her.

Say what you will about the kind of guy who’d do this to a girl — being screwed over in any of an aspect of a relationship sucks but I’m inclined to see anyone putting this much effort into revenge is a bit fucked in the head — but the man has a flair for the dramatic. A minute of building it up, putting on his sweetest “Here comes a surprise” voice while telling her to make sure she keeps her eyes closed, and the slightly menacing singing of “Happy birthday” before she starts to open her eyes, it’s all a tour de force of revenge most people in the same situation wish they could have but don’t have the sociopathic DNA in them to attempt.

BUT WITH ALL THAT SAID, how do you not keep the video rolling for the punchline of her losing her damn mind??? This face when she put it all together in her head was great and all: 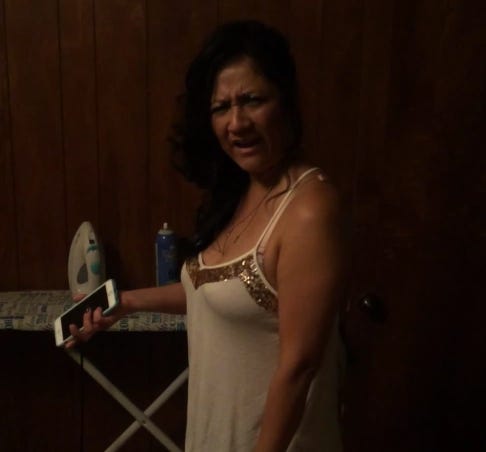 But all that Hitchcockian setup with only a second of her reacting was the biggest just the tip situation I’ve ever seen in a video like this. Unless the video was edited to prevent showing the murder that happened in the ensuing few seconds, there’s no excuse for not giving us more aftermath. Then again, if any girl has ever been walked through an entirely wood paneled and windowless house with her eyes covered and hasn’t been murdered, that’s probably a massive upset all things considered. When searching Apartment Therapy for ways to decorate your home, settling on Texas Chainsaw Massacre chic should not be your first and only choice.