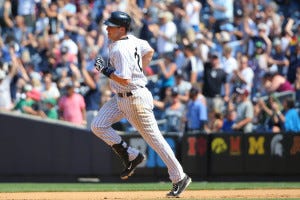 Big start to the 2nd half taking 2 of 3 from the Mariners in a series we were supposed to win. The first half of the season was shocking, so you naturally worry about the guys getting a few days off and not keeping the momentum up when they come back. Luckily it looks like we’re in good shape.

If it wasn’t for Cano having flashbacks to happier times on Saturday, this would have been a sweep. At the same time though, as long as we don’t miss the playoffs by 1 game, having Cano hit comfortably at Yankee stadium just rubs it in that he made the wrong decision taking the money and walking away from pinstripes.

Another great thing to see out of these 3 games, is that our starting pitchers looked pretty good. Tanaka was his usual self, making a few mistakes but giving us a 7 solid innings, while Pineda really only made 2 mistakes to the same guy. This should give everyone comfort in the front end of our rotation in a 5 game series to start the playoffs. CC on the other hand, while not losing, has shown that he really would be best suited as a long reliever. No longer a dominant starter, every watching that game thought the whole time, “Is this the inning he blows it?”. Which is no way to go through life.

The biggest development to come out of the weekend is that Refsnyder was sent back to the minors Sunday morning so that Beltran could come off the DL. No one understands the move because it would be much easier to just release Chris Capuano or Brendan Ryan, who both haven’t been productive at all this year. It seems like instead of that move, Cashman is trying to hold onto every possible trade chip he has. While we all want Refsnyder in and Drew out on a permanent basis, it looks like their are bigger plans that will come together over the next 2 weeks to improve this team. Whether that involve Refsnyder being a trade chip in the process, I don’t know, but the pressure is on for Cashman to make some moves and take this division.