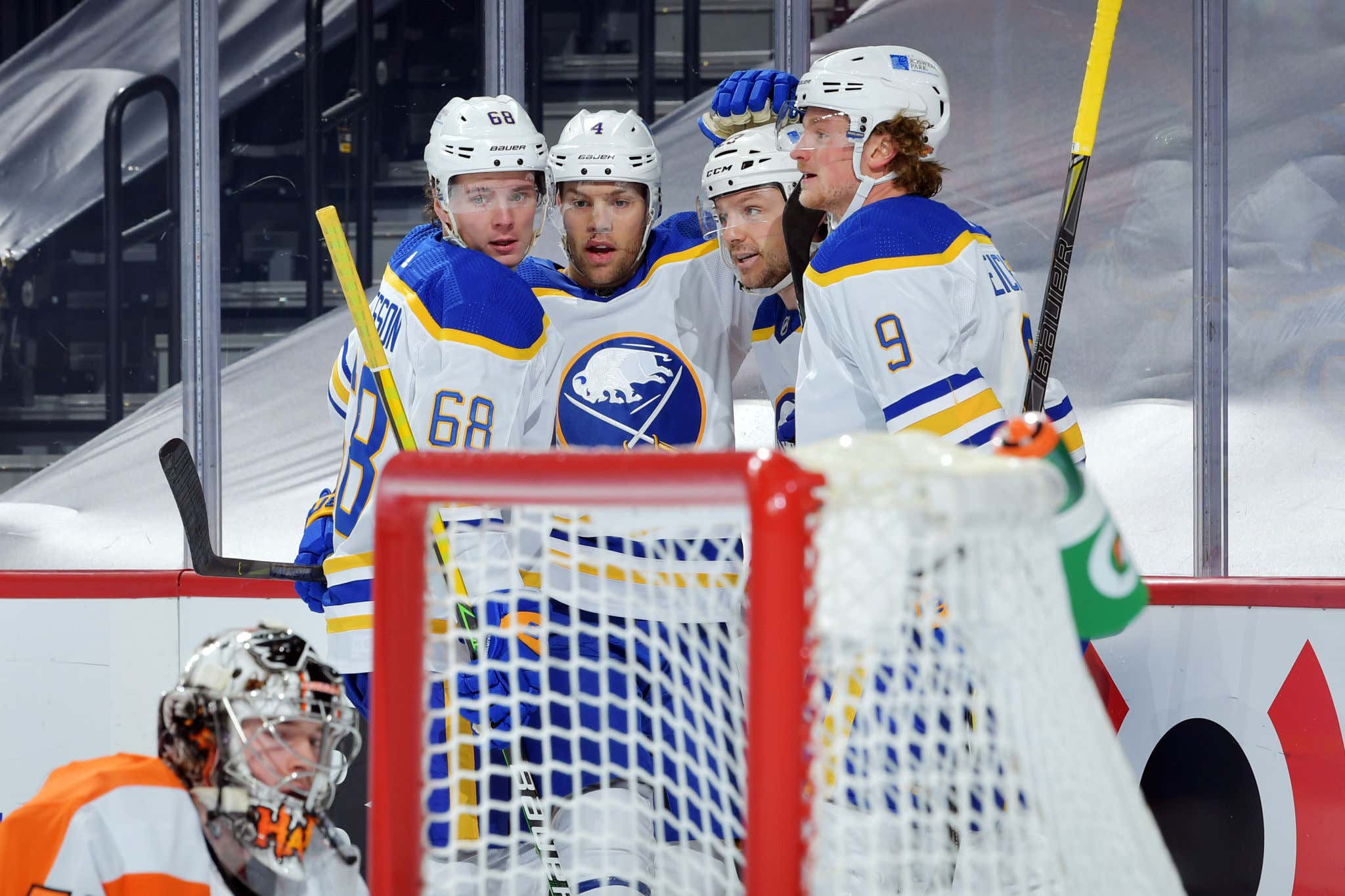 The Philadelphia Flyers men's professional ice hockey team went out last night and got their dicks kicked in. No other way around it. This team looked like white dog shit for roughly 57 out of the 60 minutes played last night. And it's not because the Sabres are a vastly superior team or anything. But I'd have to imagine that what we've got here is failure to communicate. Failure to communicate the fact that Buffalo is buzzing right now, and the Flyers were going to need a helluva lot more of an effort last night if they were going to put up any resistance to that city.

The Sabres landed Taylor Hall and Eric Stall in the offseason. The Bills are heading to the AFC Championship Game for the first time since 1993. For the longest time, Buffalo has been the lovable loser of sports towns in America. But that's not the case anymore. The city is a wagon, but nobody told the Flyers. So they went out there last night thinking they were taking on the same old Buffalo that they've known since Danny Briere and Ryan Miller left.

Good news for the Flyers is that quite literally everybody sucked last night. So at least nobody had to go into the locker room taking on the majority of the blame. They could all share an equal amount of shame. Every single facet of that game was putrid, so let's talk about it real quick before we forget this game ever happened.

Carter Hart, Please For The Love Of God Stop Playing The Puck

I love Carter Hart. You love Carter Hart. We all love Carter Hart and have all the faith in the world that he's going to be the best goaltender in the NHL one day. But for right now? There are 2 areas of his game that are disastrous. 1) I think his rebound control has been shaky at best so far this season. But I'm sure he'll start to dial that in the longer the season goes on. And 2) playing the puck behind the net.

He already gave up that goal to Crosby in the first game of the season after he tried to clear the puck from below the goalline and Crosby deflected it into the net. Then there was this 2nd Reinhart goal from last night. He tries to stop the puck from rimming around the boards, it hops over his stick, and then before he has a chance to get himself settled back between the pipes he gives up a soft one to Reinhart less than 2 minutes after the last goal. And sure, Myers lost a puck battle in the corner to Hall. Aube-Kubel did nothing to help. Sanheim left the front of the net to try to break up the Hall pass but couldn't get a stick on it. And then Scott Laughton was nowhere to be found to cover Reinhart in the slot. So it was a breakdown by everybody on the ice right there. But it starts and ends with Carter Hart not being able to handle the puck. It jumps over his stick and then he's so discombobulated that he gives up a reallllll soft one to Reinhart. Again, I love Carter Hart but if he wants to be the best goalie in the league? Well he's gotta be better than that.

The Blue Line? More Like The Blew Line, Since Those Guys Sucked

I know it's only one game but the defense on this team can't be ignored for much longer. I thought the forwards sucked last night, too, but there is enough talent and depth at that position that I don't see it being a permanent issue. The blueline, however? Well that's clearly the weak link of this roster. Outside of Provorov, there's not one defenseman on this team who you can rely on to be consistently solid. Sanheim and Myers will show flashes but on a regular basis? They haven't proven it yet.

Which is why Chuck Fletcher needs to start thinking about the trade market here. Unless Ghost has managed to find a way to completely reinvent his game or something. Because this team has a chance of opening that contender window right now, but the amount of turnovers from the defense failing to clear the puck out of the zone every night could fuck that whole thing up come playoffs.

Help Us, Sean Couturier. You're Our Only Hope

So the goalie had a rough night. The defense looked rather putrid. And the forwards? Well for the most part, the forwards were totally irrelevant last night. Now there are 2 possibilities here. One is bad, but the other is horrible. The "bad" is that this was just the first game the team has had to play without Sean Couturier in the lineup and they just need some time for all the lines to adjust to their new roles now without their main shutdown and possession center in the lineup. Tough to watch last night, but hopefully all 4 lines will have a better idea of what they need to do tonight in order to make up for Coots not being out there.

The "horrible" is that this team simply cannot play without Sean Couturier in the lineup. I know this is one of the deepest forward groups in the league, but Couturier is the plug that keeps all that depth together. My guess is that AV makes some line adjustments tonight and hopefully we'll get a better idea of if this team can handle these next 2 weeks. But in order for that to happen, then guys like Giroux and Voracek really need to step up to make things happen. Can't be getting paid like superstars and then be invisible when the best player is out of the lineup.

- That first powerplay of the night for the Flyers was the turning point in that game. As soon as they wasted 90 seconds of that PP not being able to even enter the zone, you knew it was going to be a long night. The Flyers haven't been able to figure out a powerplay zone entry for the past 10 years, but last night was some of the worst its been in a while.

- I thought Morgan Frost actually looked pretty decent, all things considered. He made a few nice plays early and didn't seem to be lacking any confidence. Maybe the only positive to take out of last night.

- NAK should probably get ready to drop the gloves at some point tonight after that hit on Dahlin.

- Whatever the response is for tonight should be able to tell us a lot about this team moving forward. I think this team has done enough to prove to us that we can be optimistic when it comes to the Flyers, so I'm feeling confident in a strong bounce back. Don't let your hatred of the Eagles spill over into the Flyers season.