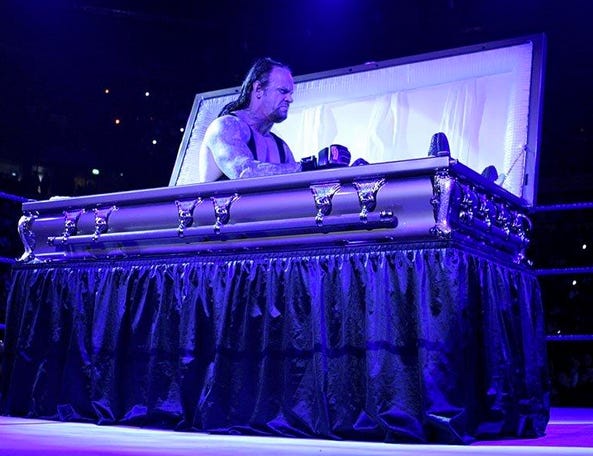 Inquisitr - Huge rumors are flying around right now, and they are making a stir in WWE that is usually only felt around WrestleMania. Both The Undertaker and Sting are rumored to return and have a match at SummerSlam in August, but is it all just talk? Well, now it appears as if some things are confirmed and a backstage update even says when fans can expect to see them both back on TV. WrestleZone is reporting that Undertaker will definitely be on Monday Night Raw next week, and that is set to be his official return. Some have thought he would show up on Sunday at Battleground, but looks like they will hold off one more night.

Jared Carrabis (@JaredRedSox) has been freaking out about this and wanted me to blog it, and for good reason. For the last few years, we’ve seen Undertaker once a year- at Mania. He shows up, does his match, and is gone for 364 days. But now, things look to be changing:

Looks like Undertaker will be part of the programming from this Sunday/Monday until Mania in April, including a match at SummerSlam. That’s big. Even though he’s old, he’s still a big draw. And especially if Sting is involved in it too:

On another note, SummerSlam is looking to be even bigger as F4WOnline is indeed reporting that Sting, along with Undertaker, is a part of the advertising already cut for the August Pay-Per-View.

Well hot damn. We saw Sting lose at Mania to HHH, and then he fell off the Earth. People have been clamoring for Sting vs Undertaker for fucking years, and now it’s becoming more and more of a possibility. I’d like to see Undertaker beat Sting at Summerslam, and then lose…yes lose…at Mania. Legends like Undertaker believe in “going out on their backs” aka losing their last match. A loss to someone like Seth Rollins at Mania would cement Rollins as a huge name and big time heel in WWE. Of course Lesnar could always beat Taker again, but people can’t help but cheer for Lesnar because he’s such a beast, so I’m not sure that will happen.

There’s a lot of different ways they can go with this. All we really know is Mania at Jerry World is going to be massive. 100k people, all the legends like Stone Cold and Hogan will be involved, and they are going to make the card as insane and the matches as great as possible. The road to Mania usually starts at the Rumble in January, but it looks to be starting a bit early this year. Definitely a good idea to get people interested in it a bit early.