With James Harden gone, basically all the focus now shifts to what the Rockets are going to do with PJ Tucker. There's no reason they need to hold onto him, and if they are entering a rebuilding phase then this is where you cash in your veteran player for picks. You see that price? He's practically free. That's why you're going to see a ton of contenders be tied to Tucker.

Now maybe you don't really watch the Rockets and aren't even sure what type of player PJ Tucker even is. Good on you for clicking this blog because I'm going to tell you. I'm going to go so far to say he's the perfect fit for the Celts roster right now. Allow me to explain

No, I'm not suggesting that those averages should make your dick hard. But what I do see is a player that checks basically every single box I'm looking for when it comes to Danny Ainge using that Hayward TPE.

His salary is $7M. That means they can't use the Kanter TPE (5M), but he more than fits into the Hayward TPE and would still allow the Celts to add a big salary player as well, if that guy exists. That's a factor, but it's certainly not the most important piece. Let's look at how he even fits with this roster.

The two big lineup has to go. It just has to. The numbers we're seeing with the Theis/Thompson pairing are comically bad. See for yourself 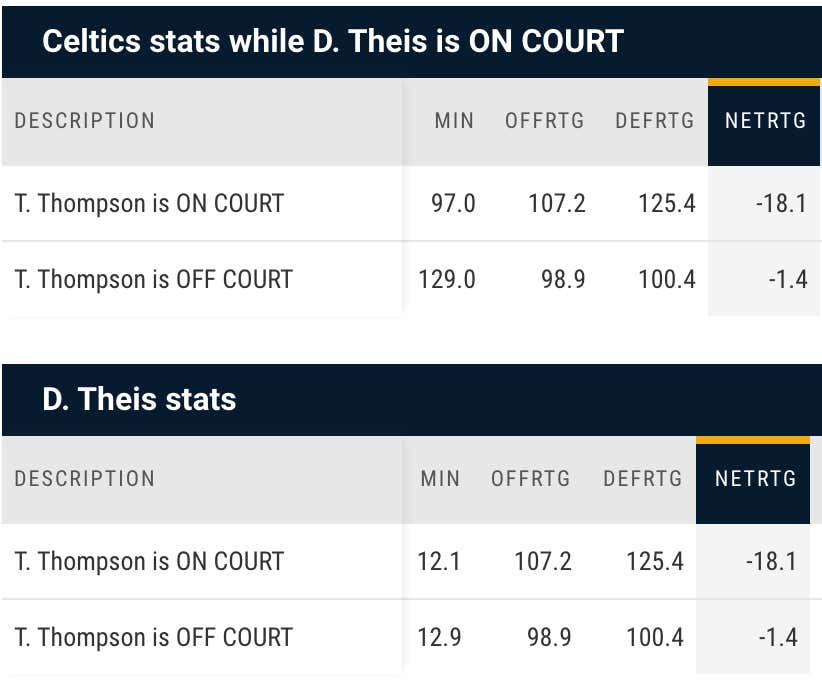 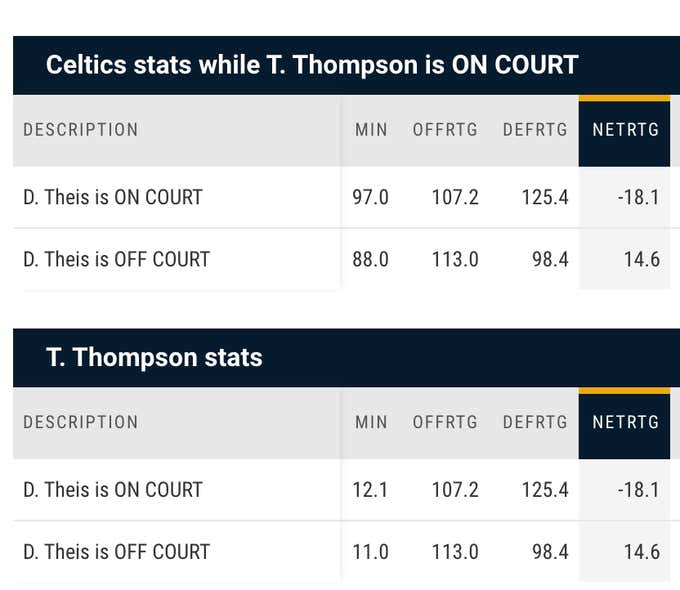 This tells us that eventually, Brad is going to move away from this disaster and it's my guess that he starts Tristan Thompson. That means this team is going to need to find a PF. My guess is that when Kemba is back Smart will slide back to the second unit, so unless the team is going to slide Tatum to the four, they need a PF. Given there's no Gordon Hayward type wing to fill that three spot, I'm under the impression that Tatum is going to stay at the three.

In today's NBA, your four needs to be able to shoot threes. That's part of the reason the Thompson/Theis pairing doesn't work. Theis is not a good or consistent enough three point shooter. You could potentially slide Grant into that role, but why not bring in a proven player who is basically a better Grant? Try this production on for size

This season, PJ Tucker ranks in the 93rd percentile as a spot up shooter. He's averaging 1.48 ppp while shooting 61.9%. Now I know what you want to say. Small sample size blah blah blah. Well, last season he shot 41% from the left corner and 35% from the right. The season before it was 34/43%. In 2017-18 it was 43/37%. Get the idea? PJ Tucker is an above league average shooter from the corners. Now think of how the Celtics play. A big part of their offense is running the high P&R with either Kemba/Jays and attacking the rim, leaving the corner open for threes. It's a huge reason why Jaylen/Semi are taking their leaps, because this shot is important to how the Celtics play.

You're adding a proven commodity when it comes to PJ Tucker. If teams want to cheat and clog the lane to prevent the Jays/Kemba from attacking, well then he's going to knock down open looks. It opens everything up for your best players. This was a role that Hayward never really thrived in. It's literally ALL PJ Tucker does offensively. It's a great system fit.

Yes, AD got the last laugh, but this is also a thing that happened

Tucker might be undersized, but defensively he can still bring it. He's versatile when it comes to guarding multiple positions. Sounds like a Danny Ainge guy right? That's basically all he and Brad care about. Can you guard multiple positions at a high level? Can you be trusted in a playoff series. If you throw out a defensive group of Smart/Jaylen/Tatum/Tucker/Thompson I mean….that fucks. You have good switchability at ALL FIVE positions. You can handle smaller quicker lineups (swap Theis for TT), or bigger lineups because PJ Tucker can handle it.

It's like having an older version of Smart on your team. The guy is not afraid of shit and brings it on that end every night.

Doesn't steal shots from the Jays

This is a big thing people need to remember when thinking of TPE options. There are sexier names out there, you can dream about Zach LaVine, Harrison Barnes, Aaron Gordon etc. The only problem is those players are young enough to where they are still going to want their looks. The whole idea should be adding pieces to this core that fit the idea of the two Jays being your two primary offensive options. Then Kemba is going to have to eat. You know what Tucker doesn't demand? Shots. He can get his looks within the flow of the offense and be cool with it. You don't have to worry about any of that usage drama that has been an issue for this team at times.

It goes without saying that Grant's NBA path is to essentially become the next PJ Tucker. That's a realistic comp for him while I think he'll be a better passer. Well what better way to make that a reality than to bring in the real PJ Tucker and have him in Grant's ear every single day. That's going to help you down the road if this team is committed to Grant's development as the next small ball four on this team.

I think it's maybe unrealistic for this team to think they can rely on all these young and unproven players come a playoff series. We saw what limitations that bench had last year. Well, PJ Tucker is a postseason career 43/41% shooter. In his three postseasons in HOU he shot 43% from three in 40 games while also shooting 44% from the floor. You can trust him. How many guys fit that description that can be had for 2nd round picks and only $7M of salary? Not many.

So as you can see, no matter how you want to slice it, PJ Tucker is a perfect fit. He's my #1 wish at the moment for the Hayward TPE. Not just because he can help right away, but he's realistic. I will keep stressing that point. We need to be realistic of what Ainge can bring with that asset that will help improve this team. PJ Tucker does just that.

I'm at the point where I would almost be willing to deal an end of 1st pick in order to separate the Celts from other contenders. Or maybe see if HOU likes any of the end of bench guys. The point is, this is the exact player I want Ainge to be aggressive with. You have a chance to add a valuable piece without gutting key rotation players or overpaying in terms of salary. It makes so much sense it hurts.