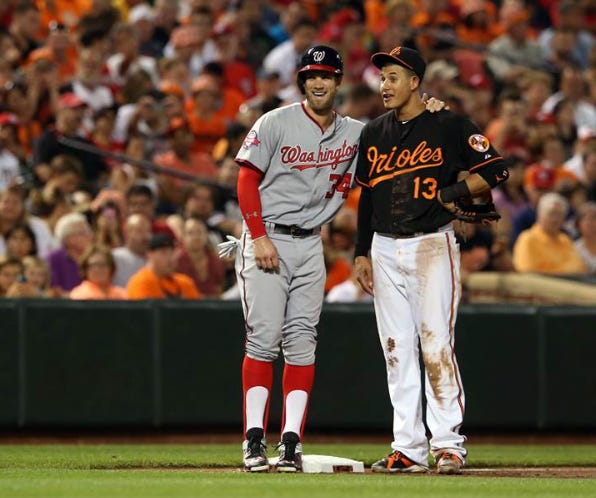 74 games left, thats it for the Orioles. Gotta start winning some games before another team starts running away with the division. In third place with a 44-44 record, yet only four games back. It’s still an open AL East, so if the O’s play marginally better than they did in the first half, which isn’t asking much, they can win the division.

Their series loss to the Nats last week was rough, but it was the first time that’s happened since 2007, so lets put that behind us. With a series against NY coming up, they can jump right back into the driver’s seat. They start off the second half with a nine game road trip and need to start fast. Before we dive into the second half, lets take a look back at some highlights of the first half from the Birds. 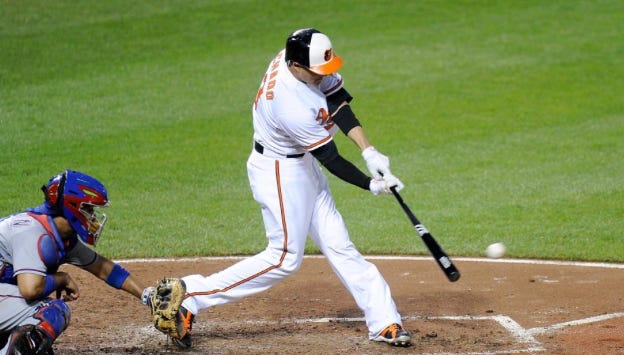 Without a doubt, Manny Machado has been the Most Valuable Oriole in the first half. Named an All-Star for the second time, Machado showed off what got him there during the All-Star Game. 12 dingers in Round 1 of the Derby, 1-2 with an RBI in the All-Star Game, and flashed that leather we’ve grown to love.

Coming off another knee surgery, we were all worried if Manny could ever get back to his old ways, boy were we wrong. Manny has proved that he is now a superstar in this league, and belongs in the same sentence as Trout, Harper, and Bryant. Just look at his numbers- .298/19 home runs/48 RBI, tied for fifth in the AL in hits with 101, career high in stolen bases with 13, and is well on his way to a 30/30 season, plus another Gold Glove. With Adam Jones going through a cold streak and being hurt, Wieters, Hardy and Schoop out, and Davis striking out a lot, Manny has put the team on his back and is carrying them. This is just the tip of the iceberg for Manny. 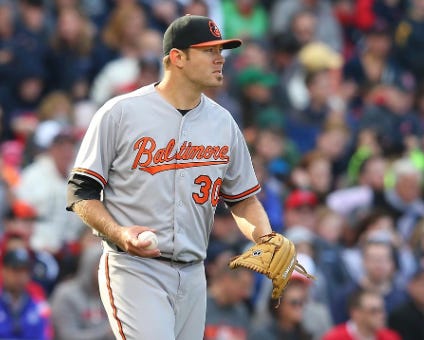 Chris Tillman came into the season as the Orioles “Ace.” Couldn’t be farther from the truth. Tillman came into Spring Training overweight, and his stats are ugly- a 6-7 record with a 5.40 ERA. Only 66 strikeouts with 38 walks in 90 innings. He just isn’t getting it done. Too many walks, not lasting long enough into games, not being able to hold leads. Very frustrating for a guy who they talked about extending in the offseason, I hope to god they don’t toss him a Rick Porcello type deal. Tillman wasn’t bad the last few seasons (44 wins since 2012) and he still has time to turn it around. Maybe a stint on the DL can help him, or maybe he fooled us the past few years and just isn’t that good. Turn it around Tilly, prove me wrong. 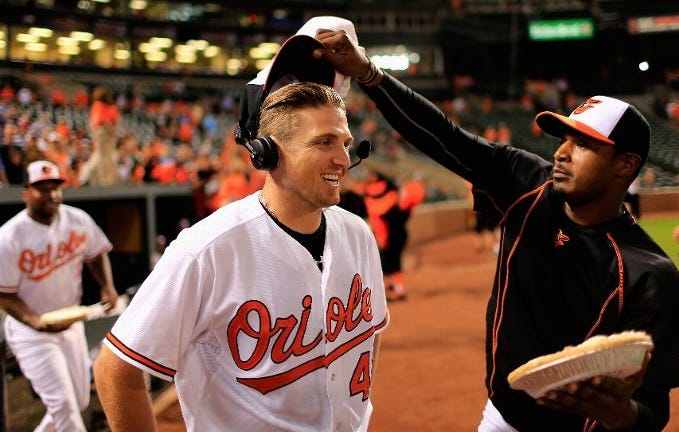 This could go a few ways. David Lough hitting the walk off against the Red Sox as riots happened outside the stadium, Schoop’s walk off against the Nats, and the 18-7 pummeling of the Red Sox was awesome too. Winner of the best O’s win this season has to be 19-3 win over the Phils. They set the team record for most home runs in a game, as Manny and Parmelee both had 2, Lough had one, Paredes had one, Flats had one, and Davis joined in too. Just a fantastic game, best of the first half. 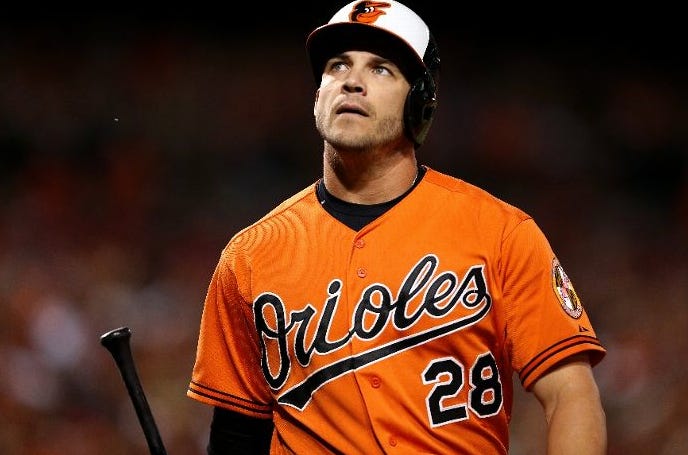 Many candidates for this one, Bud Norris, Travis Snider, Delmon Young, but Steve Pearce wins this one. 21 home runs and 49 RBIs last year, and one of their clutches players. This season he has been the opposite- 7 homers, 24 driven in with a .221 average, an OBP of .293, and a WAR of -.1. What has kept him in the field, and on the team, is his glove. He has shown that he can play anywhere for the O’s, first, second, left field, right field. Buck will put you on the field if you can play D, and thats why Pearce has stayed. He has shown flashes of coming back recently, lets hope that catches on. I can see Steve catching fire in the second half and helping the O’s. 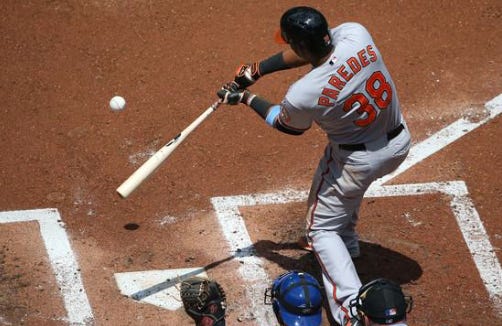 Jimmy Paredes has been the most surprising Oriole player, and one of the most surprising guys in the entire league. We saw a little of him last year, but this year he has been a exactly what the O’s needed. .299 average with 10 home runs, 39 RBIs, and a WAR of 1.5. He is exceeding all expectations. He took over the main DH spot after no one stepped up. He’s been the best Bird with RISP, batting .389 with 31 driven in, and with RISP and 2 outs, he’s batting .600, that’s not a typo. Last year it was hard to imagine that Jimmy Paredes would be one of the best offensive guys for the O’s, lets hope he keeps up this pace. 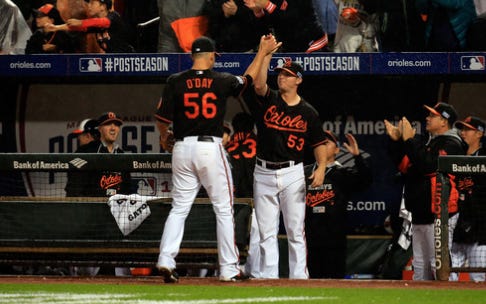 Has to go to the two most underrated bullpen guys in the league, Darren O’Day and Zach Britton. Both made their first All-Star Games this season and they deserved it. These are the captains of the bullpen that has an ERA of 2.86 going into the second half. O’Day is the best set up guy as he doesn’t walk anyone, barely gives up any runs, and has 45 strikeouts in 33.2 innings with a 5-0 record. Every team needs a guy to bridge the gap to the closer, and there is no one else I’d rather have than Darren.

Britton is 23/24 in saves, throws a devastating sinker that pretty much guarantees a ground ball out, and has given up only 1 homer all year with a 1.82 ERA. Both of these guys have been great for the Orioles, and the bullpen would be toast without them. 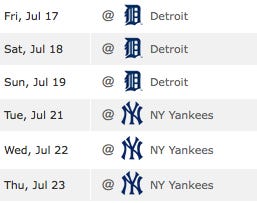 O’s start out with nine in a row on the road, I’ll focus on the first six. Going to Detroit isn’t as bad as it was in the beginning of the year, especially now that Miggy is out. The O’s will still have to face Sanchez, Verlander, and Price. Help me remember what happened last time they faced Verlander and Price…O’s NEED to win this series, absolutely need it. 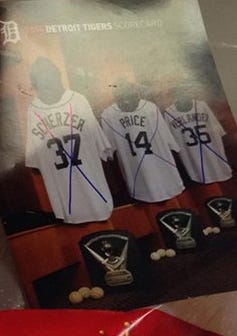 They then head to New York where they’ll face Eovaldi, Nova, and Tanaka. Who knows when Tanaka’s UCL will snap, and this is another series that can get the O’s right back into it. Winning this series would be gigantic, especially if they win the Detroit series. We saw them make a second half run last year, that was fun, lets do it again Birds.

I joined my friend Aaron Gillette from G&G Sports for his podcast to discuss the O’s, Manny’s Salsa, Chaz Roe, who has been disappointing, and the future of the O’s. Click here to check it out!