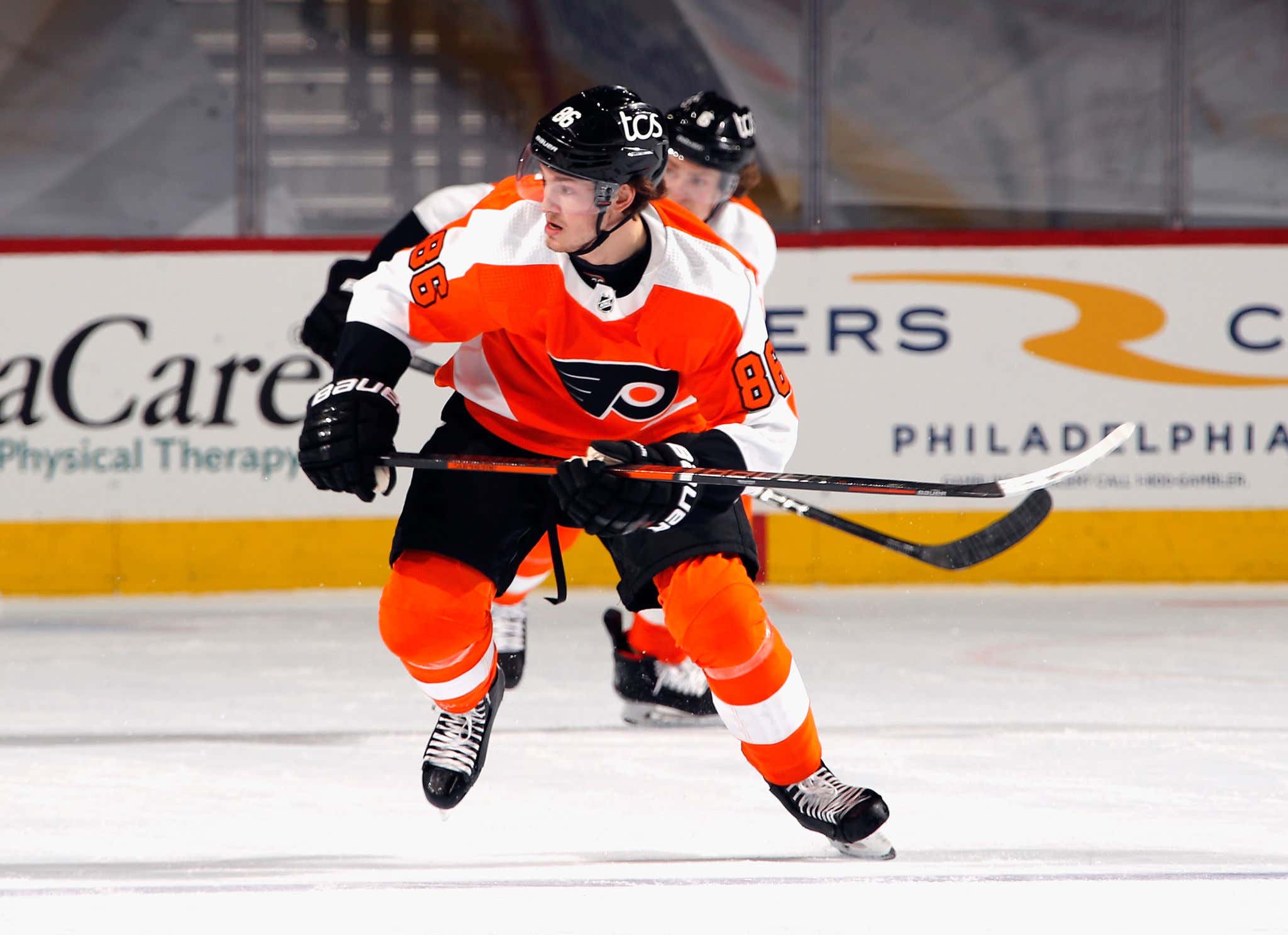 Well, folks. I hope you all paid attention. I hope you all took a good, hard look at what you saw on the ice tonight. Because you're going to be seeing a whole lot more of that as the season goes on.

The Flyers weren't perfect. It's game 1 in a season that had a 2 week long training camp and no preseason. There were going to be plenty of mistakes made all over the ice tonight. But what the Flyers proved is that they are deeper than pretty much anybody else in the league this year, and they will relentlessly outwork the shit out of you as the game goes on.

Obviously the biggest story of the night was Joel Farabee putting up 4 points in the season opener. But I want to start with this goal real quick.

Tie game in the 3rd period. You've got the 4th line going up against the Crosby line for a defensive zone faceoff. Crosby wins the draw but Raffl hustles his ass to make a great play on the loose puck. He pokes it out of the zone, Scott Laughton makes a strong play to get the puck out front for Aube-Kubel, then gets the puck back out to the front of the net where Raffl puts it home.

That's the Flyers 4th line. And they completely owned the Crosby line here in this shift by 1) having the talent to do so, and 2) working their dicks off. That's the 4th line. Want to see what the top line is capable of?

Couturier made McCann look like a child on that play. He made him look like a guy who quite honestly shouldn't be out on the same sheet of ice with him. He just easily brushes him away, makes a play to the front of the net, and then Travis Konecny is there to put it home. Kind of similar to the 4th line goal where this just comes down to the skill to make the initial set up plays, and then working your bag off for the goal.

And the thing with this line is that they're only going to get more dominant as the season goes on. There were a few times when the TK-Coots-Lindblom line clearly looked like they were a step off. That chemistry wasn't quite dialed in tonight. Which is totally understandable considering, ya know, they just started training camp like a week and a half ago. So once they start to hit each other with those passes on a regular basis? It's over for you bitches.

But yeah. This team just keeps coming at you all night with all 4 lines. Eventually teams are going to hit their breaking point where they can't keep up anymore. 3rd periods for the Flyers are going to be huge this season. Certain teams can out-talent the Flyers in the 1st period. They can stay alive in the 2nd. But very few teams on very few nights will be able to keep the pace that the Flyers keep building throughout the 60 minutes, and they'll crumble in the 3rd like the Penguins did tonight.

The city of Philadelphia and legends named Joel. Go together like lamb and tuna fish. You knew as soon as Philly Joel switched his number to 86 this offseason that he was going to be up to no good this season. I didn't think he was going to be 4-points on opening night dirty, but I'm not surprised in the slightest.

A pair of assists on the first two powerplays of the season, a goal, and then an assist to The Best One to put the dagger in this game. And the goal just goes to show how much confidence the pride of Cicero is already playing with.

Takes that feed from Hayes and without hesitation makes a power move to the front of the net and stuffs it away far side. That is a bad, bad man. And sure, he's only 20 years old. He's going to make some mistakes, he's going to go through a few tough stretches here and there. But 4 points on opening night is a damn good way to make sure those tough stretches stay few and far between. The quick decision making out of his was the best thing I saw tonight.

Also, I know it may not be the prettiest goal ever scored but I couldn't be happier for Nolan Patrick getting himself on the board tonight. First game in over 600 days for him. That had to feel great.

I thought both NolPat and Lindblom looked really good tonight. Not overwhelmingly dominant or anything, but for what both of those guys have gone through over the past year? To be out there right now and look like neither of them have missed a beat? Just goes to show the type of warriors these dudes are.

- I thought Carter Hart was fine tonight. Obviously he had that blunder on the Crosby goal. But he immediately settled back in after all 3 goals scored on him tonight. This game might not end up in the highlight package when he wins a Vezina Trophy, but he did what he needed to do.

- Erik Gustafsson, hey how are ya.

- I thought it was a really nice night for the Sanheim/Myers pair on the blueline. They had a couple of turnovers but for the most part, I thought they were solid in their own zone and then did a great job at keeping possessions alive in the offensive zone. Think both of those guys are ready to take that next step forward.