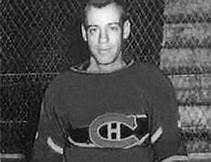 Alex Smart makes a big splash in his NHL debut, scoring a hat trick as the Montreal Canadiens defeated the Chicago Black Hawks 5-1 at the Montreal Forum. Smart is the first player in NHL history to have three goals in his first game. Alex Smart also added an assist. However, it would not portend stardom for Smart as he played just eight games before returning to the minors, never to play in the NHL again.

Alex Smart was born on May 29, 1918, in Brandon, Manitoba. After playing his junior hockey in Manitoba, Smart signed to play with the Toronto Malboros. He later spent three years playing Montreal City Hockey League. This is where he drew the attention of the Canadiens. He signed with the Canadiens in 1942 and played on their top minor league affiliate and played well but did not get called up until the Canadiens needed extra players in January.

Montreal was scuffling during the 1942/42 season as they held a record of 8-13-5 as they hosted the Chicago Black Hawks, who held a record of 10-8-6 for coach Paul Thompson. Joe Benoit gave Montreal the lead early, beating Hawks goalie Brett Gardiner. Alex Smart made his first impact on the game in the first period, assisting on a goal by Gordie Drillon. The score remained 2-0 in favor of Montreal until the latter stages of the second period when Alex Smart netted his first NHL goal. Smart scored again less than a minute later to make it 4-0. Alex Smart netted his third goal in the middle of the third period, becoming the first player to score a Hat Trick in his debut. Chicago scored late, spoiling the shutout for Paul Bibeault, as the Habs won the game 5-1.

Alex Smart played just eight games with the Canadiens, scoring five goals with two assists. He returned to the minor leagues and never had a second shot at playing in the NHL. Smart's career ended in 1951; he played the bulk of his minor league career with the Ottawa Senators, a team in the Quebec Senior League.

Alex Smart's Hat Trick debut stood alone until 1979 when Real Cloutier of the Quebec Nordiques scored a hat trick in the team's first NHL goal. Cloutier had been a star with Quebec in the WHA before the team moved to the NHL. Fabian Brunnstrom of the Dallas Stars was the next true rookie to score a hat trick in his 2008 debut. Two years later, Derek Stepan of the New York Rangers debuted with a Hat Trick. They were all topped by Auston Matthews of the Toronto Maple Leafs, who scored four goals in his debut with the Toronto Maple Leafs in 2016. In 2019, Ryan Poehling became the second member of the Canadiens to score three goals in his first NHL game. Poehling later scored the shootout winner in his debut.