All things considered this might be the most disrespectful way to end a game. Not only did it lead to an upset win. Not only was it a self alley-oop. It also hit the over (144.5). If you had the under, I'm sorry, but even you can't bitch and moan about how awesome this it is. Why? Because all week we've preached that sportsmanship is a bunch of horseshit and we need to get rid of it. What better way than an up and coming program like Oklahoma State, a team fighting to get back to national relevance ending it like this? ESPECIALLY against Kansas. The same Kansas team who had this happen to them last year and their fans wanted to bring murder charges to Monmouth:

I need every team to start dunking on Kansas at the buzzer. Play through the buzzer and that's why you're a loser if you're complaining about that. Could he have dribbled it out? Yeah, probably. But why take the risk? Just go score, go up 5 and seal the game. You can't lose a game up 5 with less than a second to go. Maybe, make sure to not bring up a potential carry at midcourt, but go score.

Then there was this play

Cade Cunningham is such a freak, man. Yes, Luka is going to win NPOY, but Cade is the most talented player in college basketball this year. Jalen Suggs is a close second, but Cade is for sure the most talented player in college. The scary thing is we haven't even seen the best of him yet. Don't get me wrong, Oklahoma State is good, but there are still times where the guys don't take advantage of Cade's passing ability, whether's it's not making the right cut or not realizing he's looking to pass. That'll change at the next level when he's surrounded by pros, but his playmaking ability and passing ability is completely underrated nationally right now.

Insane. It starts with his recognition of the drive while the guy he's guarding just completely exits the area. 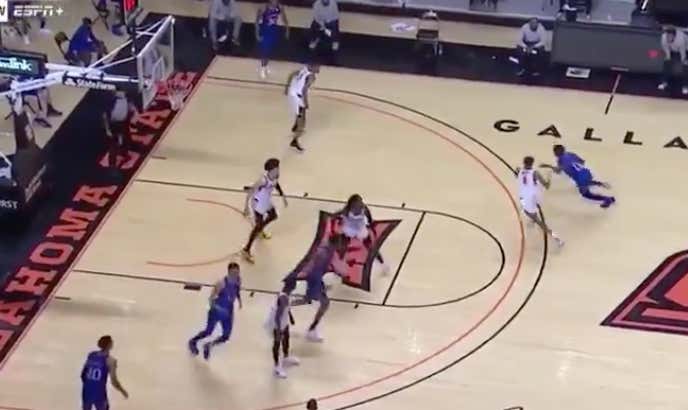 Then the ability to go up and block it with two hands, chase it down and recognize you have an open teammate on a pass that people tell you to never make? Wild. One of the better defensive plays before you even factor in that it was 70-70. This is why we need the NCAA to not fuck up this appeal and let Oklahoma State play in the NCAA Tournament. They are a top-40 team. They are being punished for the FBI investigation which had nothing to do with this coaching staff and these players. We need Cade Cunningham in the NCAA Tournament. If the bracket gave us Ja Morant vs Markus Howard we deserve Cade vs Suggs.