I fucking love Kevin Durant. He's like the Melo we were promised coming out of Syracuse. Genuinely the most gifted scorer of my lifetime. It will be crazy in 20 years when every team has their own version of a 7-foot shooting guard, but watching Durant originate this shit in real time has been so much fun. The fact that he blew out his achilles, sat out an entire prime season and came back without missing a beat on the offensive end is nothing short of a medical miracle. This happens in 1998 we're calling him hop-along for the rest of his days. As long as that achilles holds and no other injuries pop up, KD should certainly become the 9th player in NBA history to eclipse 30,000 points (in this house we respect and acknowledge the 12,000 points Dr. J scored in the ABA, sorry if this offends).

And while that's all well and good, Kyrie was a little too busy to lace 'em up with KD against the Denver Nuggets tonight. 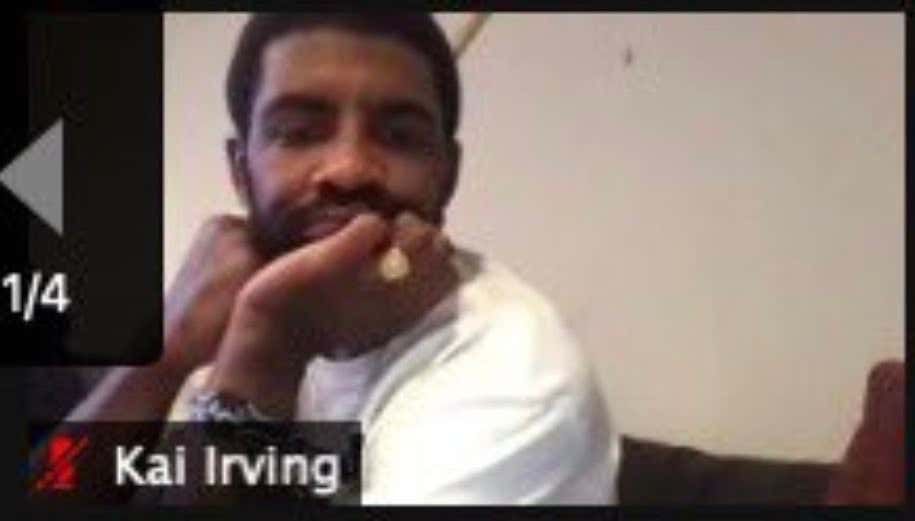 This man looks like he's serving ISS. Zero interest in chatting it up with Sex In The City above his head. In a long line of strange streaks in Kyrie's career, this current run has to be the leader in the clubhouse. Sitting out right now? Super understandable. Between the attempted coup last week and the NBA clearly having no plan as to how to deal with COVID-19, a simple phone call to Steve Nash would've quelled a lot of the discourse around his decision. Did he do that? Sure didn't! In fact, the opposite has taken place. Reports of him being "off the grid" like a true anarchist farmer have emerged after initial reports of his lack of communication surfaced last week. Then he went mask off at a birthday party. Now? Sitting in on a Zoom call assumedly tossing his support behind a DA candidate.

Any one of these actions is extremely explainable. Depression. A simple break because of the pandemic's uncontrolled spread throughout the NBA. Being with your family for a night. Using your celebrity to back a political candidate who can bring forth change in ways that could potentially positively impact the communities you care about. Individually, under the right circumstances, these are barely noteworthy decisions. Somehow, someway, Kyrie managed to turn it into a fucking clown car that has some in the basketball world wondering if he even cares about hooping anymore. Much like Durant's unique scoring ability, I can't say I've ever seen anything like this stretch from Kyrie.