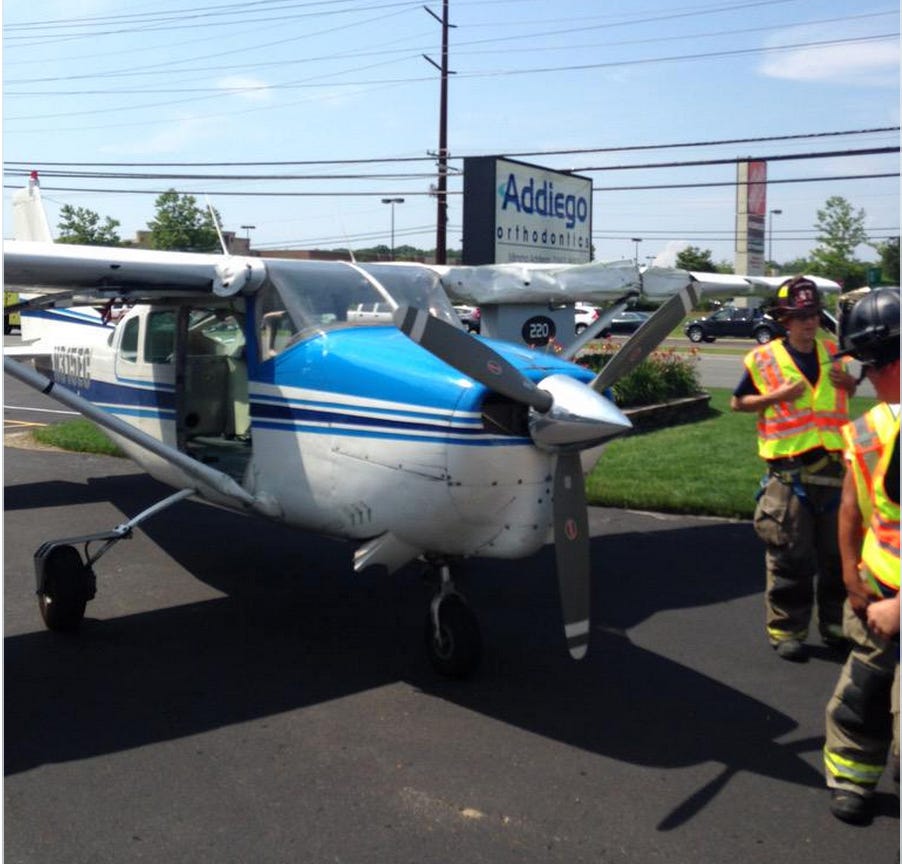 NY Times – New Jersey weekend drivers had some unexpected traffic on Sunday. A plane narrowly missed cars when it made an emergency landing on a busy highway near the Jersey Shore. The pilot appeared to struggle to avoid an initial touchdown among cars on the road before the plane veered onto the grass median. The Stafford Township Police Department released the video on its Facebook page on Tuesday. The single-engine plane, which was carrying students from the Skydive East Coast skydiving school, lost power, forcing the pilot to make the landing just after 10 a.m. on Sunday between the eastbound and westbound lanes of Route 72. An instructor was treated for a cut on his arm but no other injuries were reported and no cars were involved, the police said. The mishap was a boon to social media as the video was widely shared. Travelers slowed to a crawl to pass the plane, parked off the road with little apparent damage.

Here is a list of all the people who should flying things:

3) Alcoholic crop dusters who may, in the event of a world wide extinction event precipitated by the arrival of extraterrestrials, need to a fly a plane upwards inside one of their aircrafts as it tries to deploy is mega laser ray of death.

If you’re not one of those three people in those types of planes, get the fuck out of the air. Harrison Ford in his little 2 man plane? Get the fuck our of the air. You flying around in a little 1 man drone/glider thing that hasnt been cleared with the FAA or something? Fuck out of the sky. And if you’re some rinky dink sky diving operation you can get the fuck out of the air too. This whole idea of flying people up thousands of feet just so they can jump out is the dumbest, whitest, most “I’m-spoiled-and-bored-and-have-everything-I-want-and-nothing-else-to-do-so-I’m-gonna-jump-out-of-planes” bullshit ever.

And if you’re gonna pull an emergency landing can you at least do a Captain Sully and put that bird down in a river somewhere. Theres enough traffic on Jersey roads to begin with on weekend days without without goddam planes causing the next pile up.