Little by little, we're drifting back to some degrees of normalcy. Whether that's right or wrong isn't really my place to say. But I can say without a doubt that the Masters is a better golf tournament when the patrons' roars echo all across the hallowed grounds of Augusta National Golf Club. Don't get me wrong. I enjoyed the ever living hell out of the 2020 edition. It was a great opportunity to see the course in the fall even if the course wasn't at its very best. But the absence of the quintessential Augusta roar was unmistakable.

Now I have no idea just how much they're going to limit attendance for this thing. Maybe they'll play it by ear and decide as the Tournament creeps closer. But I can assure you this. No sporting venue is more capable of facilitating this type of thing in a safer and more efficient manner. They've probably had their own team of doctors and vaccinologists (if that's not a word, I just created it) working behind the scenes on some sort of proprietary magic potion that you can swig for the low low price of $1.50 that will banish the coco from your body forever. They might even inject it directly into the pimento cheese sammies. Who knows? I wouldn't put anything past the jackets. They work in mysterious ways.

All I can say is I am thrilled to know that the #roars will be back. Time to play their greatest hit.

PS I absolutely LOVE how the Masters social channels sign off at the end of every Masters and then just go completely dark until it's time to re-emerge. If there wasn't a pandemic ongoing requiring them to distribute news like today's, I genuinely don't think we would have seen them until April. The brand is strong. 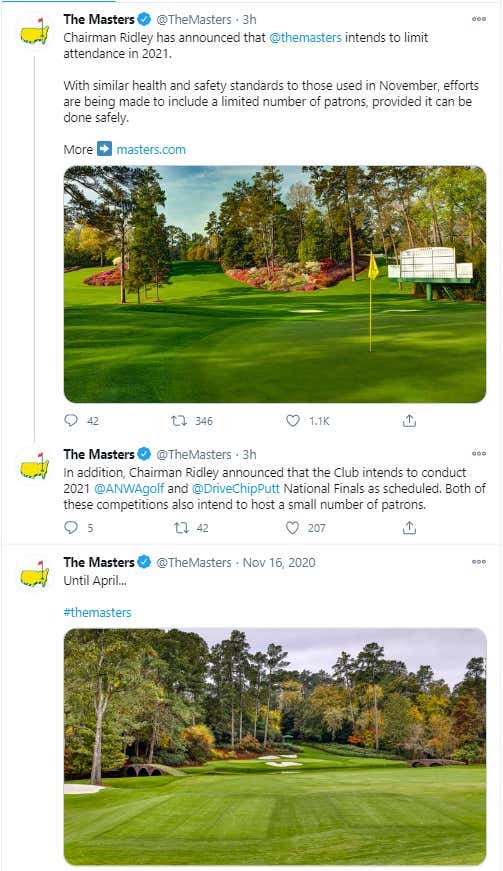