There were a bunch of great segments during the ESPYs last night for worthy people dealing with worthy causes.

But wanted to make sure the feature on Lauren Hill didn’t go under the radar. A true inspiration up until the day she passed away. Raised over TWO million dollars for pediatric cancer research. Always stayed positive despite the shitty hand she got dealt. And fulfilled her dream of playing in a college basketball game. 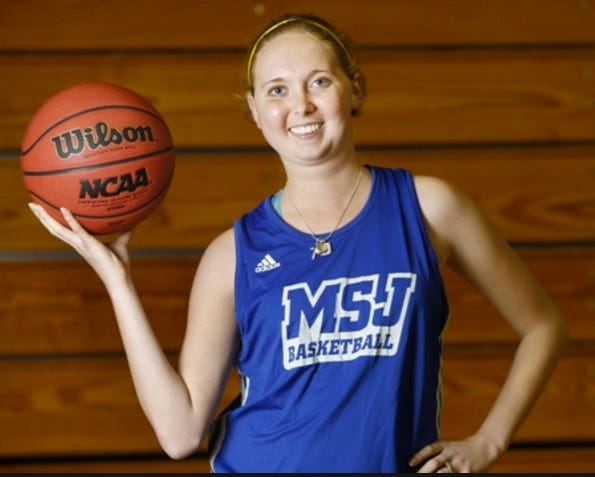 CINCINNATI — Lauren Hill spent her final year polishing a layup and inspiring others to live fully. She succeeded at both. The 19-year-old freshman basketball player at Mount St. Joseph University died at a hospital Friday morning, the co-founder of her foundation The Cure Starts Now said.

Hill wouldn’t let an inoperable brain tumor dictate her final days. Along the way, she became known simply as Lauren, someone who knew how to make the most of every day and who had a knack for encouraging others to do the same by the way she persevered.

Her nonprofit foundation that helped to raise more than $1.5 million for cancer research.

“She’s made an impact on the world, more so than me — more than I ever will do,” her coach Dan Benjamin said. “I’ve gotten so many emails and phone calls from all over the world. People are contacting me because they want to share her story.”

A year and a half ago, Hill was just another high school student getting ready for college. She decided to play basketball at Division III Mount St. Joseph in suburban Cincinnati — soccer was her favorite sport, but basketball became her selling point.
A few weeks later, she started experiencing dizziness while playing for her high school team in nearby Lawrenceburg, Indiana. Tests found the tumor. Treatment didn’t work. She knew she had less than two years left.

While the tumor squeezed her brain, Hill squeezed back, holding onto life as tightly as she could. Living every day as fully as she could. She became dedicated to raising money for cancer research and treatment and determined to show others what it means to treat each sunrise as a precious opportunity.

“I’m spreading awareness and also teaching people how to live in the moment because the next moment’s not promised,” Hill told the AP after one of her team’s 6 a.m. practices. “Anything can happen at any given moment. What matters is right now. “Especially after this kind of diagnosis, your perspective on life and what you value changes.”

It got tougher. The spreading tumor caused her to be sensitive to light, sound and movement. She couldn’t sleep well. She tired quickly and needed a wheelchair at times. She had good days and bad ones, good hours and lesser ones. Everyone watched her grit it out.

“Even though it’s sad, her courage brings out the best in people,” Mount St. Joseph President Tony Aretz said. “She’s living with courage when a lot of people are afraid to live.”

Hill played in four games and made five layups before the spreading tumor made her give up playing. When the season ended, her team held its annual dinner in a room at the hospital where Hill was being treated.

As the cancer slowed her down, her family, friends and teammates took a bigger role in promoting her fundraising campaign. And she kept reminding everyone to appreciate life.

“Life is precious,” she told WKRC-TV. “Every moment you get with someone is a moment that’s blessed, really blessed.” 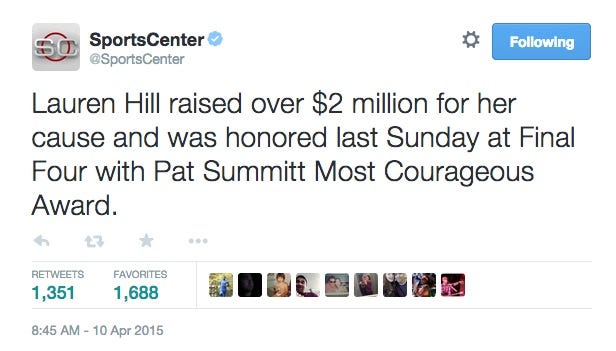