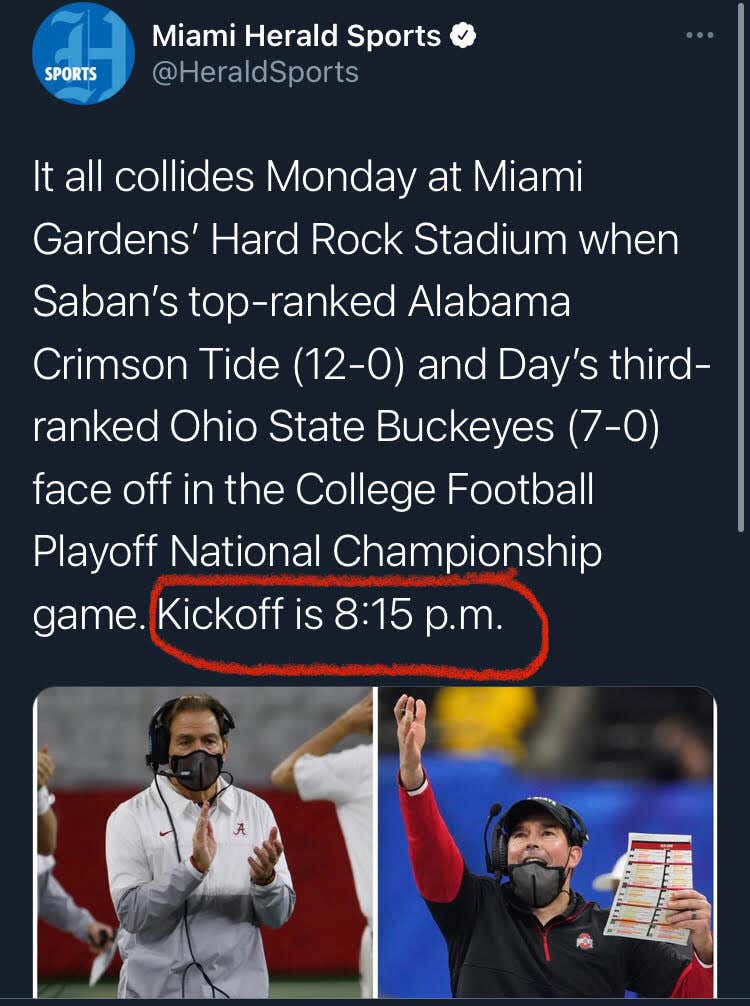 Gross. One of the biggest mysteries this world has to offer is why the National Championships are played late on Monday nights. I know what everyone is going to say: it's all about the $$$. Money talks. But wouldn't playing on Saturday night have more viewership than on a Monday, when everyone has had to sit through a long day of work and then wake up to go to work again the next morning? Sure, I'm going to stay up and watch this one tonight because my team is in it. But if it were Alabama vs Clemson, which would be a highly anticipated and excellent game, I would watch maybe the first half and head to bed. Some years I make it later, some years I don't. I caught the first half of the 2017 championship where Tua led Alabama back over Georgia. That was a surprise to wake up to the next morning. But why not put it on the weekend and let everyone enjoy it? There's no chance the casual fan heads to the bar to watch this game tonight, covid or not. They've gotta be up in 7 hours to go to work!

And you can tell me all you want that the NFL has Saturday and Sunday pretty locked up during this time of the year, but college basketball does the same exact thing. Monday night at 9 pm. What's their reasoning? I remember falling asleep on the couch when I was a kid for the Sean May vs. Dee Brown and Deron Williams national championship in 2005. And I remember falling asleep on the couch for the Kris Jenkins buzzer beater for Villanova over North Carolina in 2016. This has been going on for YEARS. And nobody likes it. Literally nobody.

Plus, the time of the games absolutely sucks. I know that timezones are a thing, but this game won't end until tomorrow here on the east coast. Tell those lazy bums out west to wake up early one time and get their 8 hours in before it's 4 pm over there, and let's start this game at 7:30 here. Not broadcast starts at 7:30. I want KICK OFF at 7:30. My god, how has this gone on for this long? It pisses me off each and every year, twice a year. I saw lots of candidates proposing lots of things this election season, but I didn't hear one damn politician discuss moving the national championships to the weekend. That person would've had unanimous support, on both sides of the isle.

Someone explain to me why it has to be this late on a MONDAY. I'm less likely to watch on Monday than I am on any other day of the week.