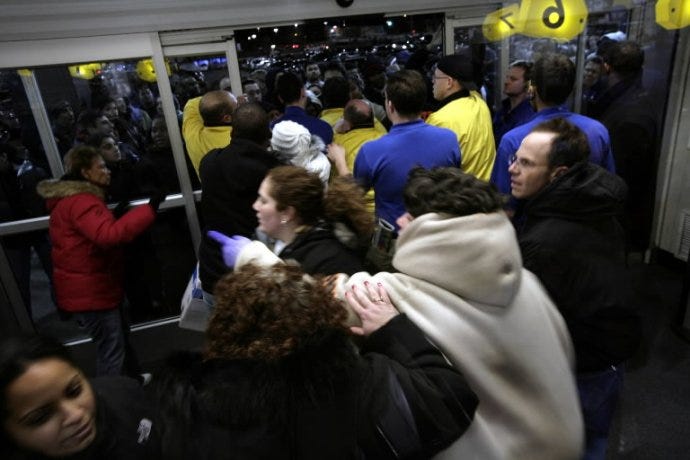 Time- For a few hours late Tuesday night, visitors to Best Buy’s website could buy a two hundred dollar gift card for fifteen dollars. If it was simply a technical problem — which seems likely — the company quickly fixed it, but not before a number of nocturnal opportunists took advantage of the apparent bargain.  Unsurprisingly, the concerned citizens of Reddit were the ones who brought the glitch to light. People who ordered a gift card said that the sale went through and that their banks were charged, though the company will likely—and understandably—reneg, citing a glitch.  “I am an employee of Best Buy, and we are very good at honoring our mistakes, however, mistakes this public with 1000s of people ordering something super discounted by mistake will most likely get canceled,” one Redditor wrote. “In the mean time, I went ahead and ordered 2, but chances are, we’re all getting a refund.”

Goddamn it.  I was up late last night after the RUSH that was the 2015 MLB All-Star Game (This Time It Counts!) and my basic ass was too busy thinking about how Amazon Prime Day was kicking off in a few hours.  I had seen a few Best Buy tweets on my Twitter timeline, but thought they were mostly jokes about how the store is just known for idiot bargain hunters trying to slit each others’ throats for a cheap 50″ TV.  Well for that and whether or not the Baltimore Best Buy had a payphone back in 1999.  Nope, turns out they were literally giving away free money to anyone with insomnia and an addiction to the internet (or West Coasters that have nice weather and don’t have to stay up until midnight on a work night to watch things like the All-Star Game or Monday Night Football.  Bastards).

Now the question here is whether or not Best Buy will be Indian Givers and take back the deal.  A similar thing happened when Walmart sold a ton of stuff for ridiculous discounts due to a glitch and they stopped as many orders as they could before correcting the price.  So it will be interesting to see how Best Buy tries to wiggle out of this one.  Because being called an Indian Giver is one of the worst things you can ever be called in the history of mankind.

PS- Completely unrelated, but my buddy swears that he was playing Oregon Trail and hired an Indian guide to help him cross one of the rivers in the game and the Indian let his wagon sink.  To this day, I do not believe him and think that propaganda like that is a legitimate slur against the Native American people.
Follow @TheClemReport