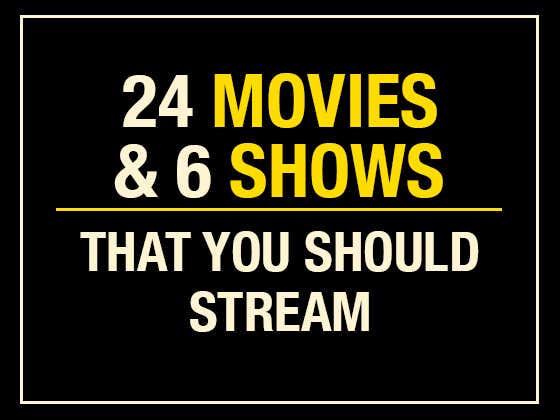 1. Mud - (Ranking) Mud is a little bit of a slow burn, but damn is it good. It's one of those extremely Matthew McConaughey roles that you just want to soak yourself in.

2. Superbad - (Ranking) I don't need to convince you on this. It's one of the best comedies, if not the singular best, of the last two decades. Just letting you know that it's live on Netflix.

3. Catch Me if You Can - (Ranking) We've talked about this movie a lot on the pod because it is sort of fucked how it doesn't get the recognition it deserves. It was peak Hanks, the end of the young Leo era, the start of Amy Adams, and it's Spielberg. It's a fantastic movie that just gets lost in the shuffle.

4. Cool Hand Luke - (Ranking) This is one of the all-time classics for a reason. Paul Newman is one of the OG coolest dudes in the world and he puts that aura and some incredible acting on display here.

5. Peaky Blinders (Show) Everyone knows what Peaky Blinders is. I'm about halfway through my rewatch now and honestly, I forgot how great it is. I still can't believe the guy that made this also made Dad Boat, one of the worst movies I've ever seen in my life. I'll spare you from watching but I just need to get the twist off my chest. At the end of the movie, it turns out that the entire movie has been a video game that a kid made where he had been playing as his dad and fucking his mom.

1. Se7en - (Ranking) It's obviously a little awkward seeing Netflix political character man in movies now, but this is an undeniably great flick. Pitt, Freeman and unnamed guy put on an acting clinic complete with some of the freakiest set pieces you'll ever see in a crime movie.

2. The King of Staten Island - (Ranking) No link just yet because it drops tomorrow. I didn't really know what to expect from this movie, but it is honest, authentic and a very solid watch. Davidson plays well to his strengths and Bill Burr puts on a CLINIC.

3. Mad Max: Fury Road - (Ranking) Incredible action, even better visuals and some really solid dialogue. It's one of those huge action blockbusters that I just assume everyone has seen, but I'm unpleasantly surprised by how many people skipped on it. Watch this damn movie!

4. Pulp Fiction - (Ranking) I just did a Dog Walk draft of 1994 movies, and I think Rear Ad killed it with his #1 overall pick of this movie. One of QTs best and a must-see for anyone who likes talkies.

5. The Dark Knight - (Ranking) I'm not pitching you. It's Dark Knight, you've seen it. Just know that it is on HBO Max

6. School of Rock - (Ranking) One of the great music-comedies of our time and my personal favorite Jack Black roles. I have nothing but great nostalgia for the many times I watched this movie growing up and repeating (Cello, you've got a bass).

7. Spirited Away - (Ranking) We're fresh off the 80th birthday of Miyazaki, aka the capo del tutti capi of studio G, so give him a little birthday present by watching one of the greatest animated movies of all time, earning him a few cents in royalties.

8. Princess Mononoke - (Ranking) Same reasoning. This is one of the 3 best movies Miyazaki has made and it is well worth your time.

9. Succession - (Show) Get in on this while you still can, that way you can be part of our hive whenever we finally get season 3.

10. InuYasha - (Anime) This is a little more hardcore as far as how much of an anime fan you have to be to get into it, but I just started and I'm enjoying it quite a bit.

1. Constantine - (Ranking) This movie got shelled, but I think it is a damn fun ride! Plus, Peter Stormare plays my personal favorite rendition of Satan in this movie.

4. Support The Girls - (Not ranked yet) This is a very fun indie comedy that has plenty of laughs and just as much heart. It's a quick and very easy watch.

5. Hell's Kitchen - (Show) I only recently started going through this show, but it's a blast. Yea it's dramatic nad some of it feels staged, but i love this sort of slop!

1. Master and Commander - (Ranking) - One of the all time great dad movies, this still holds up so well.

2. Donnie Brasco - (Ranking) This is a great mob movie that doesn't get the shine it deserves because there are so many great movies in the genre.

3. Ghost in the Shell - (Not ranking, anime movie) This is the movie that inspired the Matrix, as well as a ton of other dystopian future projects that came in the lat 90's and early 2000s.

4. A Taxi Driver - (Not Ranked) No, not the De Niro one. This is a Korean movie starring Song Kang-ho from 'Parasite' about the Gwangju Uprising in South Korea.

5. Bosch - (Show) If you like police procedural shows, you will love Bosch. Plus, who doesn't love Titus Welliver? You might be thinking "Who's Titus Welliver?". Google him and you'll be like ohhhhh yea I like that guy!

1. Soul - (Ranking) While maybe one of the least Pixary movies, this has the trademark Pixar feel to it that we all crave. If you haven't spun it up yet, what are you waiting for?

2. Remember the Titans - (Ranking) We're getting into the NFL playoffs, why not watch one of the all time great football movies.

3. Howard Bound - (Ranking) When Chance got that mouthful of porcupine spikes? I coulda cried. Damn, what a picture.

4. Man vs Shark - (Documentary) I don't think people take enough advantage of the Nat Geo catalogue that is available in Disney+

5. Marvel Legends - (Show) For those of you that are going to watch WandaVision later this month, this is a good refresher on the characters.The first two episodes, focused on Wanda and Vision respectively, are live now.