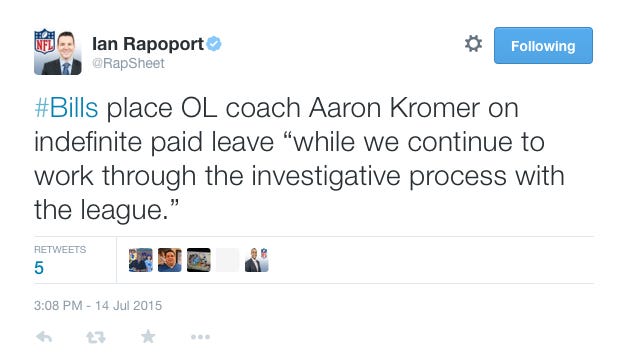 Couple of things here. 1, how much does it KILL Rex Ryan to have to put Kromer on paid leave and most likely fire him? All Rex has talked about since day 1 is building a bully. Bully this and bully that. Even brought in Richie Incognito, the world’s biggest bully, as an IMPROVEMENT on the locker room culture. And now he has a coach that is punching kid’s in the face and threatening to murder families and he can’t even use him. Worst nightmare for a bully in training. Kromer is exactly the type of guy you want right now and you have to suspend him. Life ain’t fair.

Second, I saw yesterday they said Kromer is basically going to go with the “it was dark out” defense and I have to say I don’t hate it.

A source told FOXSports.com’s NFL insider Alex Marvez that the incident stemmed from Kromer responding to the theft of his beach chairs.

You can’t be held accountable for your actions once the sun goes down, you just can’t. It’s like when you were a little kid and needed a night light. Darkness is scary, when it’s dark out read and react simply becomes react. So you hit a couple kids and threaten to murder a few families. Bet if it was 2 oclock in the afternoon this would all have  been handled in an adult manner. If anyone is to blame here it’s the Sun for not being up all the time. I think we can all agree on that.

Are there any better words in the English language than “indefinite paid leave”. Oh that’s his punishment??? HA!