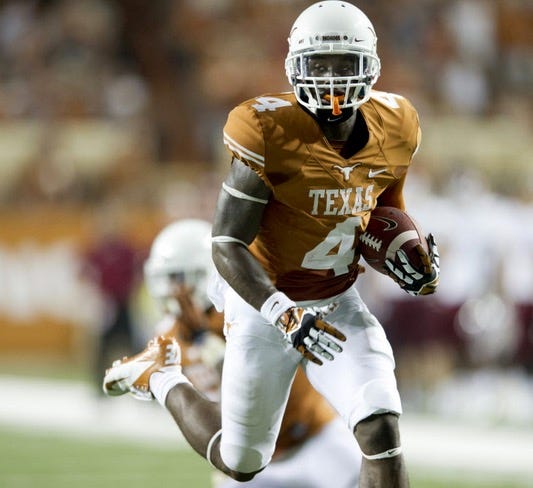 Lost Lettermen – ?Texas senior wide receiver Daje Johnson is allowed to rap in his spare time. It just might not be in his best interest to produce a track called “Dealer” that’s about, well, selling drugs. The track is not very good, but again, the quality is not the problem here.

Not even joking this may be the most genius move I’ve ever seen a college football player make. I mean you know how the NCAA is these days, looking to crack the whip and make some sort of big statement every day, constantly searching for violations. You know how careful coaches have to be to protect their programs and immediately suspend or cut anyone who could potentially give them a black eye. Someone like, a drug dealer per se. So as someone who has frequently found himself in trouble and has been suspended from the Longhorns two times already, what’s the best way to get out in front of any possible suspicion and prove you don’t do drugs or deal them? Release a song onto the internet about you doing drugs and dealing them.

Seriously, would a guy featured on a song with this as the chorus –

Ever ACTUALLY deal drugs? The answer is no. Of course not. The human brain doesn’t have the ability to be that stupid. It’s just a scientific fact that anyone that idiotic would have been removed from the food chain through Darwinism at some point early in their life. Anyone who 1) knew they were under the NCAA microscope all the time and 2) had any inkling at all how the internet works would never in a million years do something like this unless they had nothing to hide. So I’m now 100% convinced Daje Johnson is a straight edge who has never touched drugs a day in his life and I can only assume Charlie Strong and Mark Emmert believe that as well.