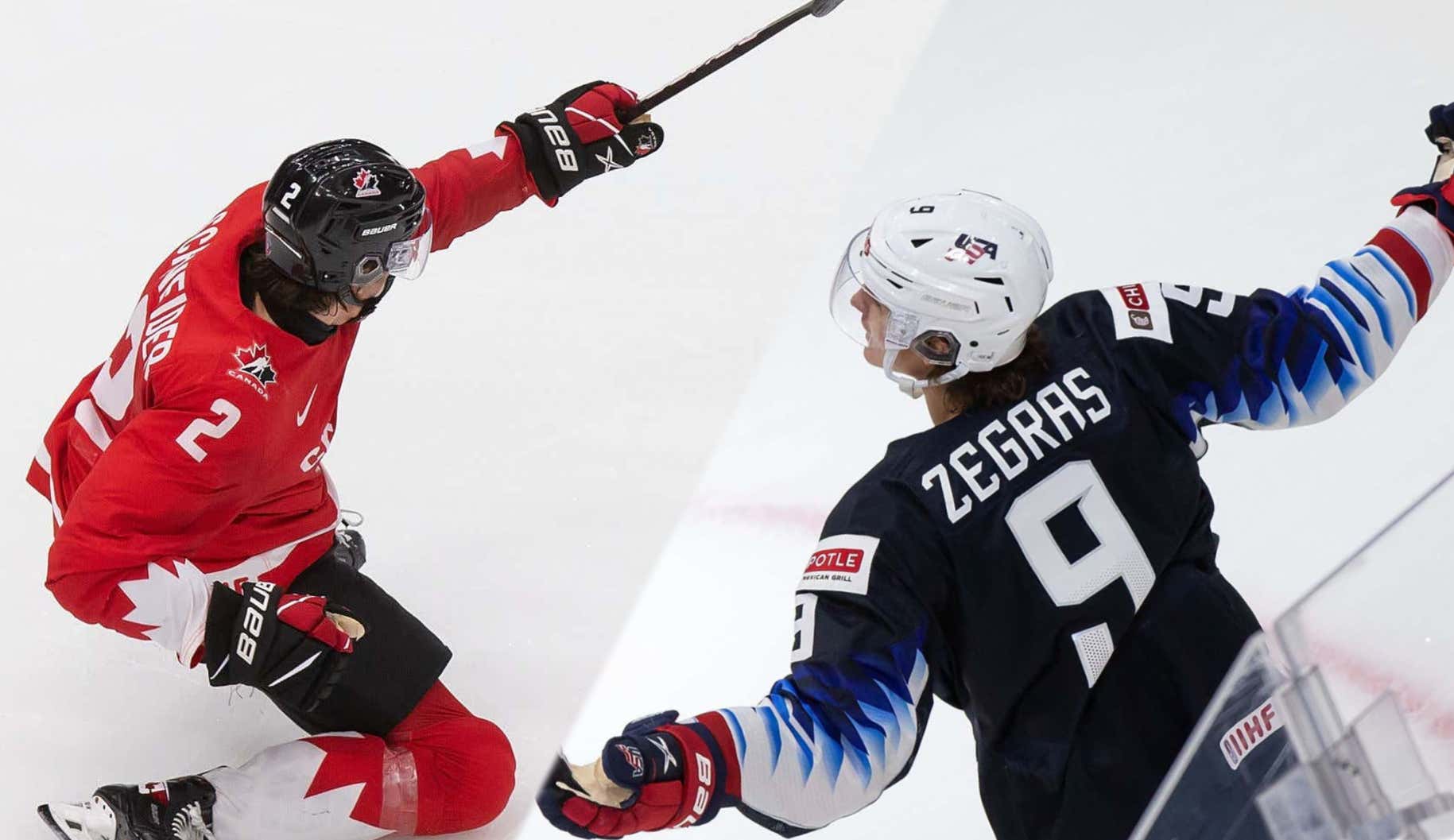 A USA vs Canada matchup in the gold medal game of the IIHF World Junior Ice Hockey Championships is one of those moments. So before we get into this year's matchup, let's wheel around through the past and sauce up a quick history lesson.

Throughout the 45-year history of the tournament, this elusive matchup has happened just 4 times before. The first was in 1997. The Canadians had won the previous 4 tournaments. In the preliminary round, the two teams tied 4-4. They met up again in the gold medal game and Canada would win their 5th consecutive gold by a score of 2-0.

Then we go to 2004. At this point, the Canadians hadn't won a gold medal since they beat USA in 1997 (they had lost to Russia in the previous 2 championships). USA had still never won gold at the tournament before. But after taking down Finland by a goal in the semifinals, they had their chance against Canada again in the gold medal game. They were down 3-1 to start the 3rd period. But thanks to a misplayed puck by Marc-Andre Fleury, Team USA rattled off 3 straight goals to win their first ever World Juniors gold by a score of 4-3.

The Canadians then went on another 5-year run winning every tournament from 2005-09. And at that point, they had played in every gold medal game since 2002. But when the world is in need of a savior to take down a dangerously power hungry regime, who do they call?

The gosh darn freakin' Americans. So in 2010, Team USA finally made their way back to the final game. They already lost in the preliminary round to Canada in a shootout on New Years Eve. And when Jordan Eberle scored back-to-back goals in the final 3 minutes of regulation to send the gold medal game to overtime, it seemed destined to go to another shootout. That is, of course, until John Carlson sniped home the game winner almost 5 minutes into the overtime period for USA's 2nd ever gold.

USA won gold again against Sweden in 2013, and Canada would win in 2015 against Russia. And then the most recent time these two played in the gold medal game was 2017. In case you forgot how that one went, here is the live blog from that game.

Long story short, it was another championship game between USA and Canada that involved an absolutely insane 3rd period. Just like 2004, USA was down by 2 in the 3rd period. The Canadians had the celebrations all lined up after Mathieu Joseph scored to make it 4-2. But then Kiefer Bellows and Colin White sent that bitch to overtime. And after 20 minutes of overtime without a goal, this one went to a shootout. And I think we all remember how that went.

Troy Terry. American Hero. He had 3 shootout goals against Russia in the semifinals to send USA to the gold medal game, and then scored the only shootout goal in this one to close out the tournament.

So here's the thing. Obviously we all realize that Canada has more gold medals in this tournament than USA has gold, silver and bronze combined. But in the 4 times they've played each other in the final game of the tournament, the US has won 3 of them. So you tell me which number is more important heading into tonight.

So a real quick recap of how this tournament has gone so far. For Canada, that Alex Newhook goal from last night pretty much says it all. The Canadians have fucking STEAMROLLED their way through this tournament so far. Other than their quarterfinal game against Czech Republic (which they ended up winning 3-0), they've scored a goal in the first 4 minutes of every game.

They haven't given up a single 5v5 goal yet so far this tournament. They got scored on twice by Germany's powerplay, once by Slovakia's powerplay, once by Finland's powerplay, and then they shutout Switzerland, Czech Republic, and Russia. 33 goals for, ony 4 goals against all tournament and none of them at even strength. It is insane how dominant this team is. Dylan Cozens (BUF) is tied for the tournament lead with 16 points off of 8 goals and 8 assists.

Devon Levi (FLA) has been the best goalie in the tournament so far with a GAA of 0.53 and a save percentage of 97.46%. Those numbers are preposterous.

And then Bowen Byram (COL) makes you wonder if the day is going to come when the Avalanche have two defensemen with 100+ points between Byram and Makar. Because this kid is electric.

There are too many studs on Canada's roster so we'll just stop after those 3. But Canada has a 2nd overall draft pick playing on their 3rd line so yeah, they come at you in waves after waves after waves. Only two people could sustain a storm that rough--Tom Hanks in Cast Away, and the United States junior men's national hockey team.

USA might not have as many 1st round draft picks on their roster as Canada, but they are just as deep. And other than a tough showing on Christmas night to open up the tournament against Russia, they've been just as dominant. 25 goals for, and only 5 goals against. They had 3 straight shutouts against Austria, the Czech Republic, and Sweden. Last night's semifinal game against Finland got pretty stressful in the 3rd period, but this team proved that they can win a tight game and bounce back after giving up a lead. Canada hasn't been tested once in this tournament, so last night's game was a big advantage for USA heading into tonight.

Obviously the guy leading the way here is the one who is tied with Cozens at the top of the tournament with 16 points. That would be Trevor Zegras (ANA) with 6 goals and 10 assists. Rumor has it that they're going to change the name from the "Silk Road" to the "Zegras Road" after seeing the hands that this kid has on him.

Zegras tries to do something ridiculous with the puck pretty much every time its on his stick. So if Team USA finds themselves in a position where they need somebody to make a big time play tonight, it'll most likely be coming from #9.

One one end of the ice will be Devon Levi in net for Canada. He was a 7th round pick for the Florida Panthers in this year's draft. On the other end of the ice will be Spencer Knight in net for the Americans. Honestly I wish there was a way to make this a Loser Leaves Town type of situation. Winner makes the jump to Florida, loser becomes a free agent. But either way, this game will come down to whichever Panthers goalie prospect shows up the most. And Spencer Knight has bounced back great after that game against Russia. He's 2nd in the tournament among starters with a 1.99 GAA and a 0.922 save percentage. Knight has had to be the better goalie so far given the competition, and I see that staying the same tonight.

Cozens vs Zegras. Levi vs Knight. And then it'll be Byram vs Cam York (PHI) on the blueline.

He has a goal and 5 assists so far this tournament, and he had a couple big shot blocks in last night's game against Finland. I think Jake Sanderson (OTT) might be the more exciting defenseman to watch on this American team, but Cam York has done a great job as a leader on this team. And that'll come in handy when this game inevitably starts to turn into a gongshow in the 3rd period.

So there you have it. Everything you need to know heading into tonight's game. This Canadian team is LOADED, and this American team has the talent and depth to match it. The biggest key to a US win will most likely be the powerplay. Since Canada doesn't really give up any even strength goals, you need to make sure you take advantage as many times as you can on the 5v4.

I'll see you all tonight on the live blog.