I'm 100% serious with that headline. Someone is going to have to explain to me what the hell this kid was thinking. I'm going to assume he just thought there was no time left despite being over a minute, because high school kids can be dumb. I'll never forget when I was coaching high school basketball and my backup point guard chucked up a halfcourt shot with 30 seconds left. When I asked him why, he said I thought I said 'shoot' and not the actual play call. When I asked him why he didn't look at the clock he told me he can't see anything when he's not wearing glasses or contacts. Maybe it's that situation here. Only thing that could really check out.

Back to this play though. The real star for me is this guy under the basket: 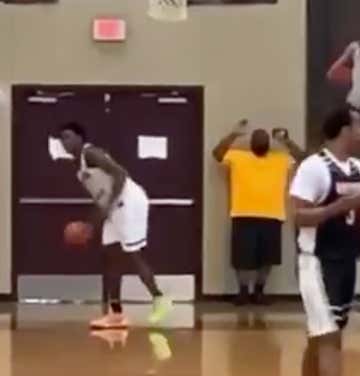 When you stop mid-text you know shit just happened. Getting someone to look up from their phone when they are scrolling Twitter or sending out a text is damn near impossible. This kid not only stopped him, but got him to raise his phone up. That's what happens when you drain a full court shot with 1:20 to go in a 7 point game.

Then there's the explanation. Sure, the entire game was confused. But no one was more confused than the coach of said team. That's where you have to be quick on your feet. Everyone knows what I'm talking about. That moment you get questioned, you know you fucked up but you still are looking for a way out. For this kid he went with the ole 'I didn't hear what was said' which is just a 100 out of 100. 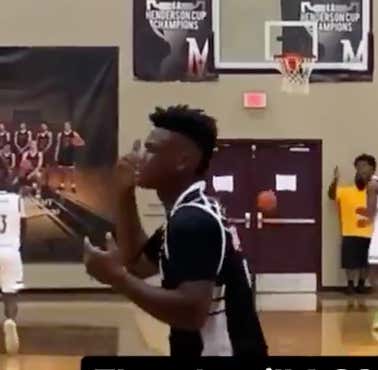 Also, announcer, show some fucking life with the call. That wasn't just a regular ass three, it deserved something in the mic. You can't just sit there and give a boring ass three call. Respect the biz one time.

So hit me with your best explanation as to what happened here. I've never seen something like this with this much time left. Appreciate the heat check though. Nothing beats a great heat check.